Even before the season started, Valtteri Bottas knew he was under pressure to prove he deserved to be chosen by Mercedes to replace Formula 1 world champion Nico Rosberg

So far, aside from an "amateur" spin in China and admitting he "could have done a better job" of avoiding a first-corner crash in Spain, Bottas has been solid - but he trails team-mate Lewis Hamilton by 29 points in the standings.

But at least 15 of those were lost when his engine expired while running third in the Spanish Grand Prix, and he managed to take his maiden F1 win under heavy pressure from Sebastian Vettel in just his fourth start for Mercedes in Russia.

Statistics suggest Bottas's start to life at Mercedes, which he signed with on a one-year deal, has been stronger than initially meets the eye.

In the races both Hamilton and Bottas have finished, the Finn edged his team-mate three-two while in the qualifying head-to-head they are locked at three apiece.

Then when you take a driver's fastest lap from any session over the weekend for each of the first six races, converted to a percentage, with 100% representing the outright fastest - known as the 'supertime' method - it is Bottas who leads the entire field so far this year.

When Mercedes struggled to get the Pirelli tyres, particularly the ultra-soft, into the right operating window in Monaco, it was Bottas rather than Hamilton who made the best of it.

Bottas was just 0.045s off pole and finished fourth, while Hamilton had to recover from qualifying 14th to salvage seventh in the race. 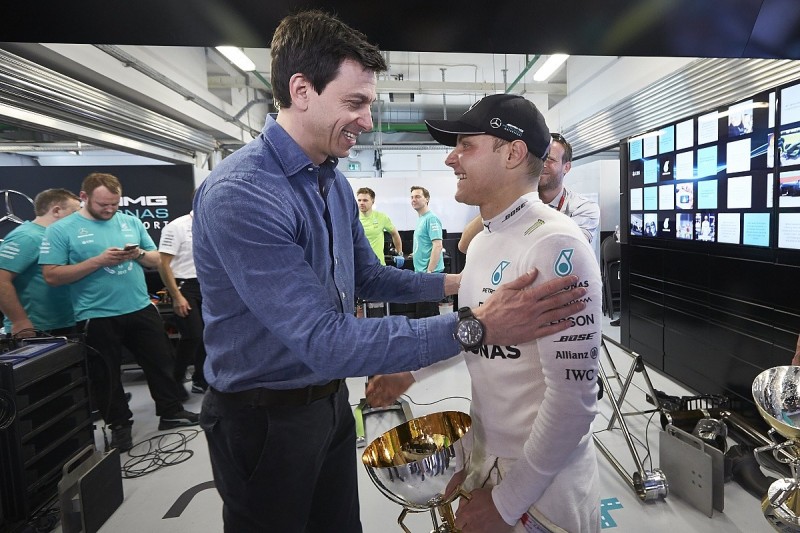 Mercedes team boss Toto Wolff said: "Considering the fact we didn't make the tyres work, it was an exceptional weekend [for Bottas].

"We analysed it over and over again and I think he outperformed the pace of the car, so all credit goes to him.

"When you have the slower car, you're on the backfoot, and he did a super job in securing those points for P4.

"Under pressure he performs well - he showed with Sebastian in Sochi.

"He's stepping up his game, with a great attitude. He keeps his cool and he's a real pleasure to work with."

Bottas appears to be growing in confidence, too, and is hopeful that he will continue to improve in the remaining 14 races.

"What gives me confidence is that there's still 75% of the season left," he said.

"That's a lot of racing, a lot of possibilities for a lot of points and I know I'm only going to get better and will still improve.

"Definitely the points gap is bigger than I was hoping for but it's only the beginning - things can change quickly.

"I feel my best races are ahead of me this year, I feel I have done a good job in some races but I feel there is more to come in getting into a consistent good level."