Mauro Forghieri, who has died at the age of 87, is widely regarded as one of the key players in the history of Scuderia Ferrari. Autosport pays tribute to the influential designer and engineer, who was equally adept at working on chassis and engines.

Mauro Forghieri's stint with Ferrari as technical director and both chassis and engine designer lasted from 1959 to 1987, and he is credited by the team with an involvement in 54 grand prix wins and nine world championships.

The fact that he survived for nearly three decades in an organisation noted for internal turmoil and a revolving door of top personnel says much about his close relationship with Enzo Ferrari. They didn’t always agree, but the Commendatore had a huge amount of respect for the younger man, and usually backed his vision.

Forghieri was born in Modena in 1935. His father Reclus was a machinist and mechanic who worked with Enzo Ferrari at Alfa Romeo in the 1930s, and again from the early days of the new Ferrari marque after the Second World War.

The younger Forghieri studied mechanical engineering at the University of Bologna, and in 1957 he undertook a form of apprenticeship at Ferrari. At one stage, he considered moving to the United States to work in the aircraft industry, as planes were a big passion. Instead, when he graduated aged 24 in 1959, he stayed closer to home, joining Ferrari full-time.

Working initially under the volatile technical chief Carlo Chiti, Forghieri was involved with the development of the 1.5-litre Formula 1 V6 engine. He was thus part of the team’s traumatic 1961 season with the Sharknose 156 in which Phil Hill’s world title was overshadowed by the death of Wolfgang von Trips at Monza.

In October that year, Chiti and his key lieutenants were fired following a major fallout with Ferrari, and Forghieri was left as the most qualified engineer at Maranello. Ferrari took the bold decision to put the 26-year-old in charge of the whole racing department. Ferrari had a soft spot for the youngster, thanks to his long relationship with Forghieri’s father and the family’s origins in the Modena area, and they worked well together.

Paying tribute to Forghieri last week, Enzo’s son Piero described what it was like at Maranello in those days.

“When I joined the company in 1965, I shared an office with Cavalier Giberti, Ferrari’s first employee,” he said, “while Mauro Forghieri, taken on a few years earlier, was next door. We were therefore separated by 10 years of age and a window. We saw each other all day every day. 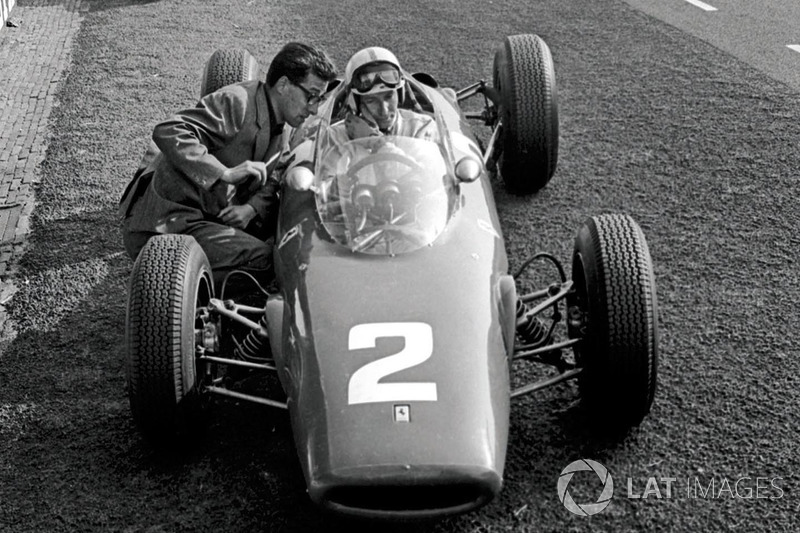 Forghieri exchanges notes with Surtees, pictured here in the Ferrari 156. He took its successor, the 158, to the 1964 world title

“Forghieri was energetic and passionate about everything he did. He was sanguine and I recall that in many of those interminable meetings at the Gestione Sportiva, that started in the evening and went on into the night, I mediated between him and my father. I know my father appreciated his tireless work ethic and he knew that any mistakes only came about through an attempt to do something better and to look ahead.”

One of Forghieri’s early projects was sorting the legendary 250 GTO, and over the years he would oversee the development of a string of classic GT and sportscar machines.

But his main focus was grand prix racing. The team had a difficult 1962 season with the now outpaced Sharknose, but form picked up after John Surtees joined in 1963, with the Englishman winning the German GP with the updated 156. Forghieri formed a good working relationship with the technically inclined Surtees, and for 1964 he designed the new 158 chassis, which would race with both V8 and flat-12 power.

Surtees won at the Nurburgring and Monza and, helped by a string of solid podium finishes, he clinched the 1964 title at the Mexico finale. Ferrari also won the constructors’ championship.

The team slipped back to fourth in 1965, the last year of the 1.5-litre formula, failing to win a race. Ferrari also faced intense competition from Ford in sportscar racing, and logged its sixth consecutive Le Mans win - and its last to date - that year with the 250 LM.

For F1’s move to three-litre power in 1966, Forghieri designed the 312 chassis and a new V12 engine. As rival new projects struggled to get up to speed, Ferrari had the potential to win the title. But after winning the Belgian GP at Spa, Surtees fell out with team manager Eugenio Dragoni and left. The opportunity was squandered.

The death of Lorenzo Bandini following a fiery crash in Monaco in 1967 was a major blow for the whole team, and that season there were no race wins. The final years of the decade were difficult for Ferrari. In 1968, Chris Amon took several poles and regularly led races with the 312, but the only success was scored by Jacky Ickx in France. That year, Forghieri conducted pioneering experiments with a rear wing, and he persuaded his boss to let him use a full-size windtunnel in Germany, putting a new focus on aerodynamics at a team where engine performance had always been the priority.

In 1969, Ferrari completed the sale of a shareholding in his company to Fiat, and he invested some of the funds into rebuilding the F1 team after another winless season. Forghieri was given some breathing space in a new Advanced Studies Office in Modena, away from the factory. There he created a new flat-12 engine that provided valuable weight distribution benefits and was a much better overall package than the V12. 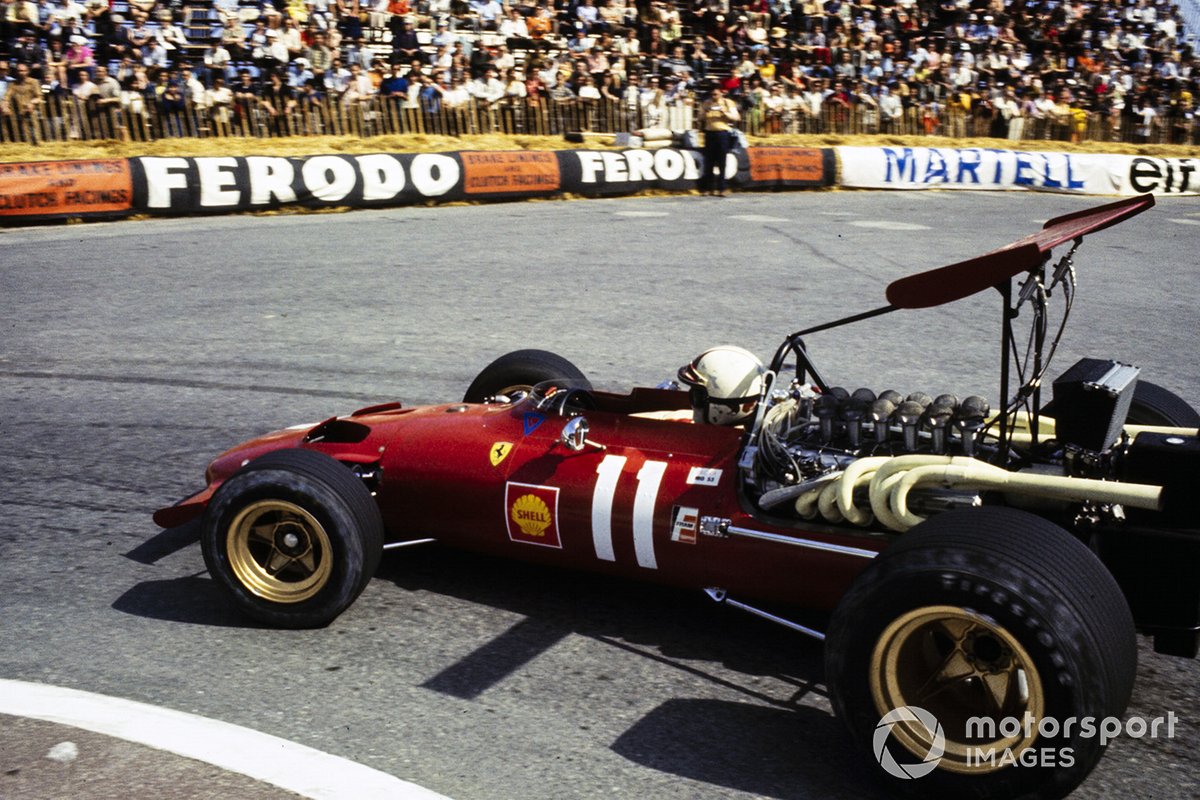 Forghieri worked on engines and chassis for the 1969 Ferrari 312, driven here by Chris Amon at Monaco

The agile 312B chassis that it was mated to in 1970 proved to be very competitive in the hands of Ickx and Clay Regazzoni, with the Belgian winning three races and finishing a close second to the late Jochen Rindt in the title battle. There would be more wins for Ickx and Regazzoni in 1971-72, despite some issues getting the cars to work with its Firestone tyres, while Forghieri’s 312 PB proved successful in sportscar racing.

The Advanced Studies Office moved from Modena to the newly opened Fiorano test track at Maranello but, in 1973 and with Ferrari ill, Forghieri was switched sideways within the company by Fiat. Without him the F1 team lost its way, failing even to log a podium.

Forghieri was recalled to F1 duties by a recovered Enzo at the end of the year, and he would play a key role in an astonishing revival in fortunes. Ferrari’s other crucial move was to hire Niki Lauda, who had made a good impression at BRM in 1973. The young Austrian came in tandem with a returning Regazzoni, who had left Ferrari at the end of 1972 but was still favoured by the team boss.

Lauda and Forghieri quickly established a good relationship, and the engineer appreciated the new arrival’s willingness to test as often as necessary and offer unfiltered feedback. Not since Surtees had the team employed a driver with such an intense interest in technical matters.

“The fact that I was able to test regularly at Fiorano made genuine progress possible,” Lauda wrote later. “And meant that Forghieri could be encouraged to experiment and eliminate shortcomings.”

The new 312B3, a heavily revised version of the unsuccessful 1973 machine, proved to be very competitive in 1974. Lauda scored his first win in Spain and added another success in Holland, although the results didn’t reflect his true pace since he logged nine poles. Regazzoni won in Germany, and the rejuvenated team jumped from sixth to second in the constructors’ championship.

For 1975, Forghieri designed the heavily revised 312T, which featured a transverse gearbox ahead of the rear axle as he sought further benefits from optimum weight distribution. The attractive machine propelled Lauda to five GP victories and that year’s title, while the team also secured the constructors’ crown – both successes were the first achieved since 1964. Lauda later wrote that the 312T was a “permanent monument to Mauro Forghieri’s skill, a gem of a car”.

Lauda was the dominant force in early 1976, and he was heading for the title with the reworked 312T2 when he crashed at the Nurburgring. He returned to the cockpit just weeks later, but ultimately lost out to James Hunt at the famous Fuji finale. The constructors’ championship provided some compensation for Ferrari. 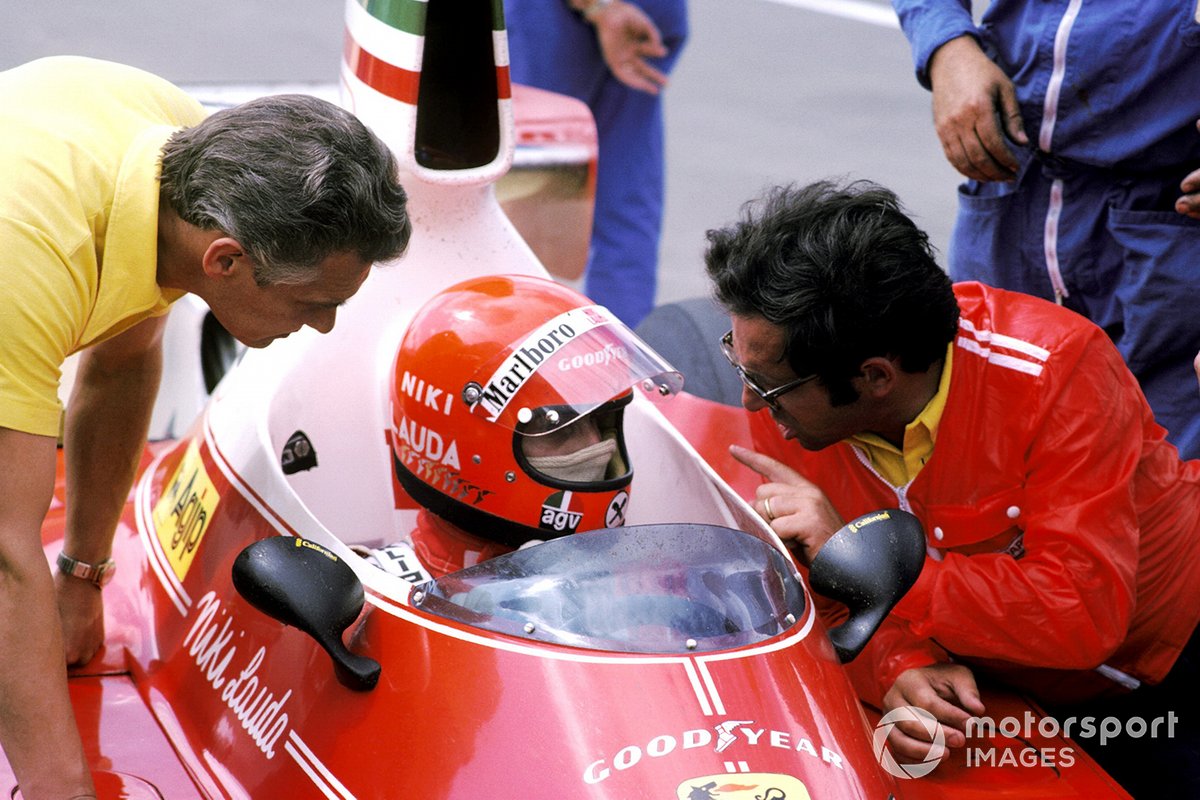 Forghieri's Ferrari 312T allowed Lauda to romp to the 1975 title

Lauda bounced back to win his second crown with the 312T2 in 1977, while the team logged a third straight constructors’ title. But by then he’d had enough of Ferrari polemics, and he moved on at the end of the year.

The brand new 312T3 was competitive in 1978 and won five championship races in the hands of Carlos Reutemann and Gilles Villeneuve, but it was quickly surpassed by the Lotus 79. Forghieri was obliged to design a ground-effects car for 1979, but the wide flat-12 engine didn’t lend itself to the concept.

Nevertheless, despite strong competition, the 312T4 proved to be good enough to secure both titles. Jody Scheckter beat team-mate Villeneuve to the last drivers’ title achieved on Forghieri’s watch, and the last for the team for 21 years.

After an awful 1980 season, the team switched to turbo power for 1981 with a V6 overseen by Forghieri. Villeneuve wrestled the difficult 126CK to two famous wins in Monaco and Spain. By then Enzo Ferrari had decided that the chassis department needed some outside knowledge, and he hired Harvey Postlethwaite to design the 1982 car under Forghieri’s direction.

The 126C2 represented a huge step forward. It should have won that year’s drivers’ championship, but Villeneuve was killed at Zolder, and his team-mate Didier Pironi was badly injured at Hockenheim. The team did at least win the constructors’ title, a feat it repeated in 1983 with Rene Arnoux and Patrick Tambay driving.

By now, F1 was no longer about having one man in charge of a whole project, and Forghieri had less hands-on involvement in the later turbo machines. In 1984 he was moved sideways into road car projects, and in 1987 he finally left the company, just a year before his friend and mentor Enzo died.

Forghieri joined forces with former Ferrari team manager Daniele Audetto and worked for Chrysler-backed Lamborghini on the V12 F1 engine that would be used by the Larrousse, Lotus, Ligier and Minardi teams in 1989-93, and which was also tested at one stage by McLaren. He also had a direct involvement in the Modena team’s Lambo 291 car driven by Nicola Larini and Eric van de Poele in 1991, which rarely qualified.

He left Lamborghini that year and worked for a while on supercar projects at Bugatti, including the EB110. In 1995 co-founded Oral Engineering, an R&D and design consultancy that worked for various manufacturers, including Ferrari. 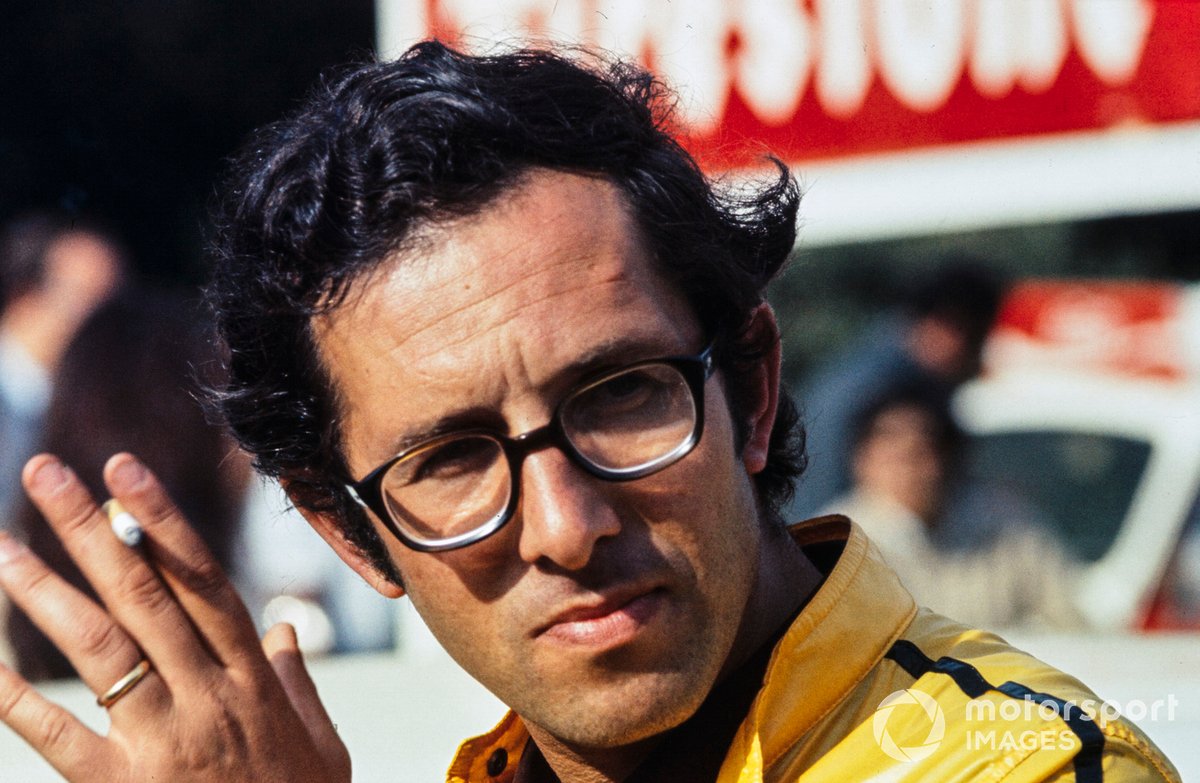 Current F1 team boss Mattia Binotto noted last week that Forghieri was a great motivator with a charismatic personality: “He was appointed as team manager at a young age and, with his brilliant insights, he was one of the last all-round engineers in the car world.

“I met him on various occasions and each time was something special. He was, to the end, a truly charismatic individual. His revolutionary ideas, together with his vibrant nature, abilities as a great motivator, meant he played a very important role in some of the most significant moments of Ferrari’s history and he did more than most to fuel the Prancing Horse legend. We will all miss him.”

Forghieri’s former colleague Piero Ferrari added: “We have lost a part of our history, a man who gave a great deal to Ferrari, and to the world of racing in general.” 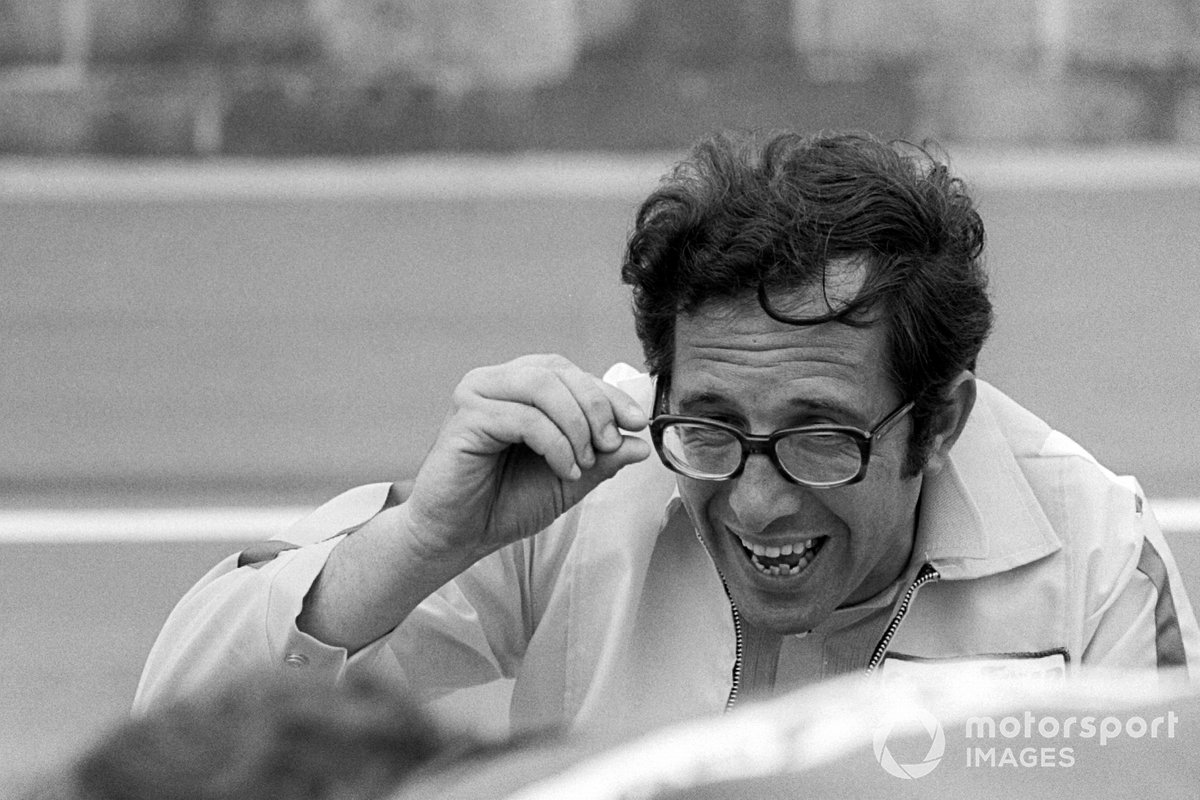 Forghieri was an important keystone of Ferrari's F1 history

Plus
Plus
Formula 1 38 min
Jonathan Noble