Leclerc led most of the race and only dropped behind his team-mate because Vettel was struggling with degradation and had to pit earlier than expected from second place to protect his position against the two Mercedes drivers behind.

Vettel's pace advantage on fresh tyres meant he had a five-second lead by the time Leclerc stopped six laps later, but the offset in tyre life allowed Leclerc to cruise up to the four-time world champion, who moved aside without costing either driver time.

Earlier in the year, Ferrari's application of team orders was in the spotlight thanks to a combination of ordering their drivers not to fight each other and laboured efforts to switch their positions early in grands prix.

However, it finally got the key strategic play right at Spa, where it was vital for its victory.

Team principal Mattia Binotto said: "[At] the start of the season, when we at least tried, it was not always very well accepted from the outside.

"But from the very start of the season, we always said that the first priority is the team, and the team points.

"So race-by-race we are normally discussing with the drivers what may be the situation.

"No doubt that after a few races things became more straightforward, even when discussing with the drivers, and the drivers are understanding it.

"It's never an easy call, I have to say, because drivers are in the car to drive as fast as they can and try to [get] as many points as they can for themselves." 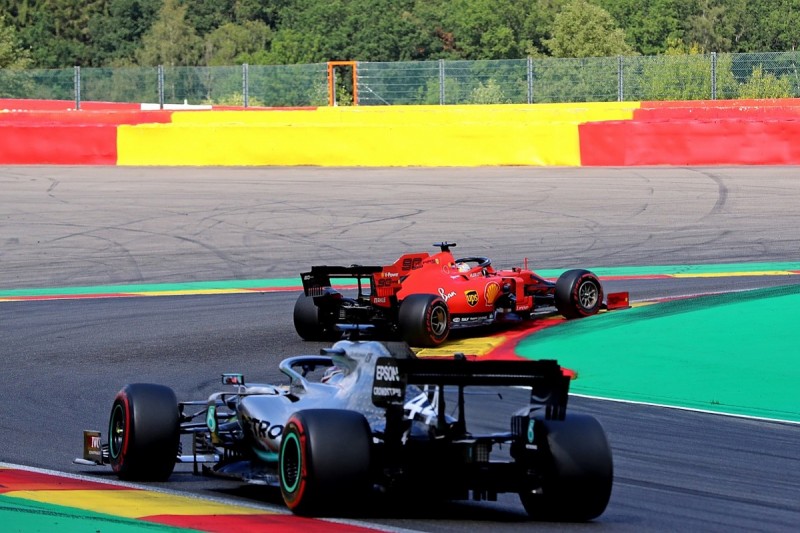 By pitting early, Vettel was protected from being undercut by Lewis Hamilton and/or Valtteri Bottas.

That meant Leclerc had to stay out otherwise Mercedes would have been in front and potentially overhauled the Ferraris had a safety car emerged.

Instead, Leclerc stayed out long enough to maintain in control ahead of Hamilton, while Vettel closed in on the two Mercedes drivers.

Hamilton and Bottas followed Leclerc into the pits, which left the Ferraris out in front - and Vettel was a sitting duck against Leclerc and the Mercedes, as his early stop left him with badly-faded tyres.

"We had to anticipate Seb's call to protect himself from Mercedes, otherwise Hamilton would have stopped," said Binotto.

"Staying out longer put Charles in a better position with tyres. "Seb was certainly faster at that stage, and he would [have] overtaken him at some stage because of the different strategies.

"They were on different strategies, and the earlier we swapped without losing time would have been the best again for the team, and Charles on that occasion."

Leclerc said he did not know that Ferrari would tell Vettel to move aside but said it was "pretty clear there would be some action".

"It was pointless for us to fight," he said. "It would be lost time for nothing and we knew that Lewis was coming.

"It was pretty clear in the car something would happen."