OPINION: Even after shattering a Formula 1 record for the most amount of races in a weekend, Max Verstappen was surprisingly non-plussed. But how does his 2022 compare to the dominance demonstrated by Michael Schumacher and Sebastian Vettel, and have Verstappen's exploits been more impressive?

Max Verstappen’s Formula 1 career has been littered with record after record, most of which have been related to his age: youngest this, youngest that.

But by claiming the record for the most victories in a single season with his 14th win of the year in Mexico last weekend, Verstappen offered another reminder - if there were ever any doubt - that his name will stand the test of time in F1’s record books for more than age alone.

The previous benchmark of 13 wins, set by Michael Schumacher in 2004 and Sebastian Vettel in 2013, started to come into view for Verstappen over the summer. As Ferrari’s hopes faded and his win tally continue to grow, the prospect of a record-breaking path to the championship started to be discussed.

Not by Verstappen, though, at least publicly. He always claimed, unlike some of his rivals, that stats held little interest to him, as well as pointing out the fact that now with more races, such records were easier to reach. “I don't think he cares,” Red Bull team principal Christian Horner said after Verstappen’s 10th win of the year at Zandvoort. “He just doesn't look at things like that.”

Autosport asked Verstappen after his 14th win whether his downplaying of the record earlier this year was a tactic to avoid losing focus, but he said he was just “never really interested in stats.” He also noted that a lot in F1 “depends on your whole package.”

So how does Verstappen’s 14-win season - which, of course, could go as high as 16 with two races to spare - compare to what Schumacher and Vettel achieved in their record-breaking seasons? And what does Verstappen need to do to make this the most dominant title win in F1 history? 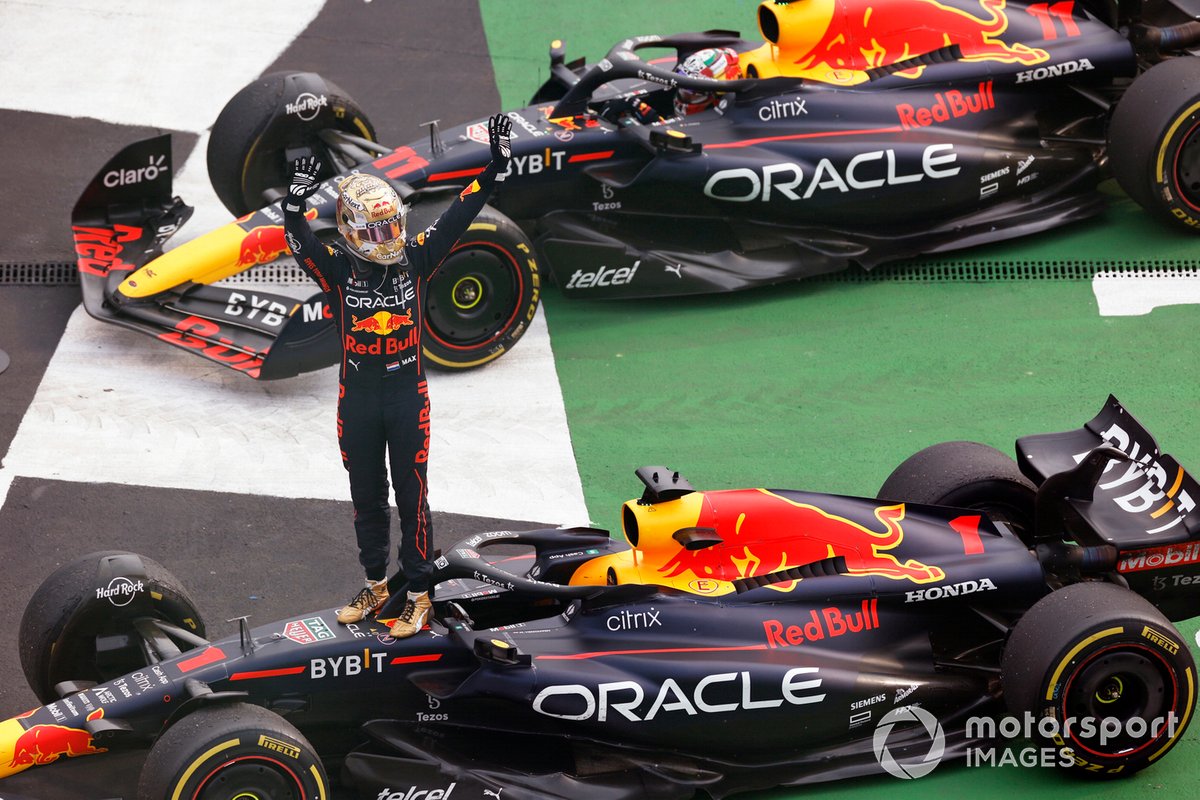 One factor that is likely to skew many of F1’s existing records is the rapid expansion of the calendar that make feats such as Verstappen’s 14 wins easier to reach. The same rings true for the all-time wins list, which Verstappen already sits sixth on.

Through a 22-race campaign, you’d need only be perfect on just over two-thirds of the season to reach the landmark. By comparison, Schumacher’s 13 wins came in just 18 races in 2004, while Vettel hit the same number over a 19-round season.

If Verstappen were to close out the season with another two wins and end on 16 for the year, he would leapfrog Schumacher’s percentage and finish on 72.72%. Only Alberto Ascari’s run of six wins in eight races for the 1952 title would statistically be more dominant via this metric.

Should he fail to win again, this would fall down to 63.64%, putting him behind not only the record-holding seasons, but also Schumacher’s 2002 title win and Lewis Hamilton’s 11 wins from 17 races in 2020.

It shows that while the number of races make the outright stat easier to reach, it cuts both ways: keeping up that kind of performance and consistency to win so prolifically through a season takes a lot. 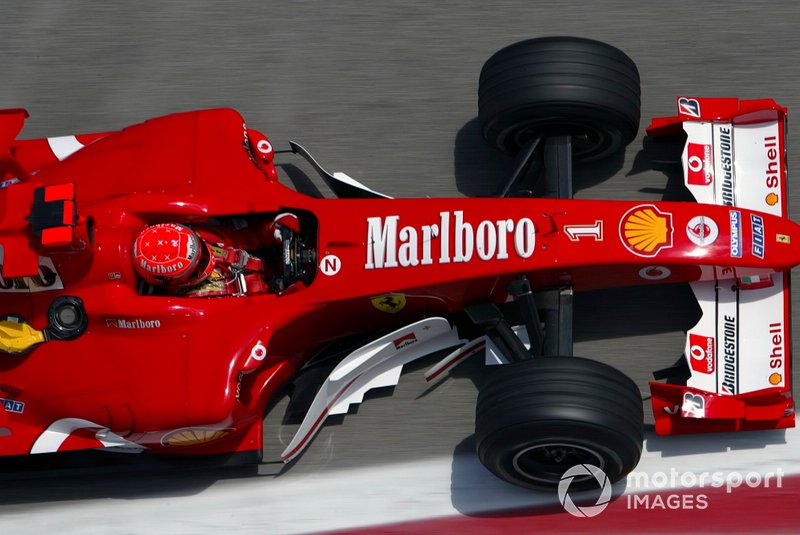 As noted earlier, Verstappen himself said that a lot of success in F1 “depends on your whole package”, with the strength of your car being essential to getting in reach of the big-hitting statistical records.

The Red Bull RB18 has been a car that can do it all. It has been a rocket on the straights, making it a potent overtaker while also providing what Ferrari called “good protection” from behind. But this straightline speed advantage remains even when the downforce is bolted on, making tracks such as Spa and Suzuka very happy hunting grounds.

Yet it was not until the summer break that the RB18 was widely accepted to be the fastest car in the field, as Ferrari and Red Bull spent the first half of the season neck and neck for performance. Ferrari’s F1-75 has just four wins to its name, two of which came in the opening three rounds, but this does not account for missed opportunities in Spain, Azerbaijan and France, where Ferrari appeared to have the edge over Red Bull.

It’s a stark contrast to Schumacher’s F2004, which emerged as the class of the field quite early on as he racked up 12 wins in the opening 13 races. Some races were hard-fought and required brilliance from Schumacher and Ferrari to get the win, such as the famous four-stop strategy to defeat Fernando Alonso and Renault at Magny-Cours. The latter stages of the season also provided some greater competition, but the 2004 Ferrari was more dominant than Verstappen’s Red Bull.

The closer similarity could be drawn to how Vettel’s 2013 panned out with the Red Bull RB9. Four wins in the opening 10 races was hardly the kind of return you’d expect to lead to a record season. But with Mercedes unable to convert its impressive qualifying pace into race distances and the mid-season tyre changes playing to the RB9’s strengths, Red Bull ran clear, allowing Vettel to go on his record-equalling nine-race sequence from Spa to Interlagos. 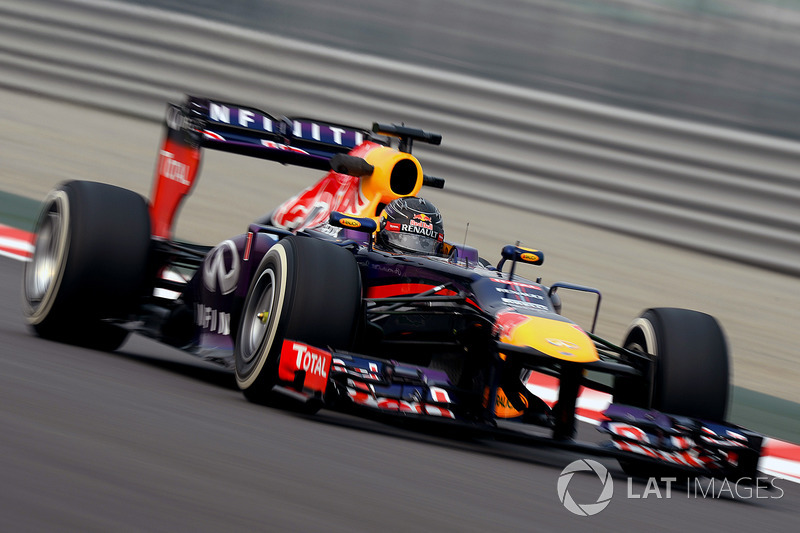 From the early days of the season, the prospect of a Verstappen/Leclerc title fight was one fans across the world relished - only for it to quickly fade out.

Ferrari may have slipped behind Red Bull as the season wore on, particularly struggling with its tyre degradation, but Leclerc did not help his cause. The error at Paul Ricard was especially glaring, throwing away the chance to claw back at Verstappen’s points lead. Verstappen himself said that winning in France was the moment he realised he would win the title. Sergio Perez briefly looked like he might get in the mix following his win in Monaco, yet he found the RB18 becoming less to his liking as development wore on.

PLUS: The type of F1 world champion record-breaker Verstappen has proved to be in 2022

But Leclerc appeared to be a closer match as a title rival to Verstappen than Schumacher or Vettel faced in their record years, particularly in the early part of the year. Ferrari’s advantage was such that Rubens Barrichello was Schumacher’s closest challenger, while Fernando Alonso stood as Vettel’s main rival through the early part of 2013. He outstripped the quality of Ferrari’s 2013 car, but struggled to properly take the fight to Vettel in the same way Leclerc did to Verstappen early on.

The most dominant champion ever?

The final two races of the season will decide whether or not Verstappen statistically goes down as a more dominant champion than Schumacher and Vettel. But the sheer length of the season, the threat he faced from Leclerc and Ferrari, and the nature of the victories, fighting through the order in Hungary and Belgium, makes this a campaign that stands apart.

“He’s won the most grands prix in a year now, within 20 races,” said Horner in Mexico. “On top of that, he’s won two sprint races, and he’s not won all of them from pole position. He’s had to fight and race for a lot of those victories.

“I think when we look back at the end of the year, it is an absolutely outstanding year that Max has driven. He hasn’t put a wheel wrong. He’s been perfect throughout the season. It’s incredible the level of consistency that he’s been able to achieve.” 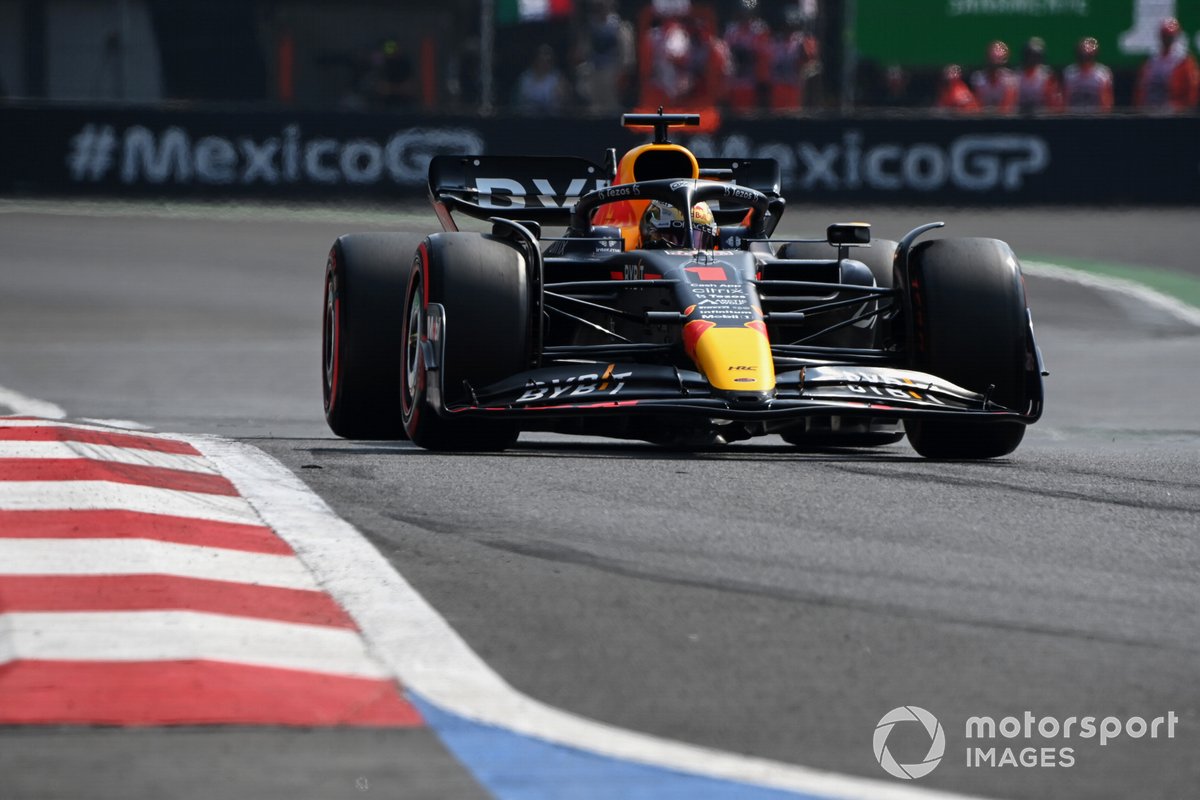