How brake designs could explain the Red Bull/Ferrari tyre differences

Ferrari started the current Formula 1 season as the car to beat, with Charles Leclerc winning two of the opening three grands prix of the campaign.

However, rival Red Bull quickly hit its stride and since the summer break has stepped even further clear, especially in race pace, as the RB18 appears to have a clear edge with its tyre management characteristics.

A lot of the focus for the swing in performance has inevitably been around aero development, as that's an area where all teams make a lot of changes throughout the year.

However, there are other aspects of car design and set-up that can play just as important a role in overall package performance. Ferrari's tyre headaches may not just be an aero thing.

It would appear that Ferrari's tyres have a higher propensity to overheat compared to those on the Red Bull. This is perfect for qualifying sessions as it helps switch tyres on, and has contributed to Leclerc and Carlos Sainz still being able to challenge for pole position up until now.

However, during the sustained heat cycle that the tyres undergo over the course of a race stint, Ferrari's temperatures can rise faster than those of its main rival – not always a strategic advantage over a number of laps.

Given how differently the tyres are performing on the Red Bull and Ferrari cars, it's interesting to note that the two teams fall on opposite sides of the fence when it comes to how they approach heat management for their brakes.

This is especially true in light of the relationship between the wheel rim and the tyre's bulk temperature. 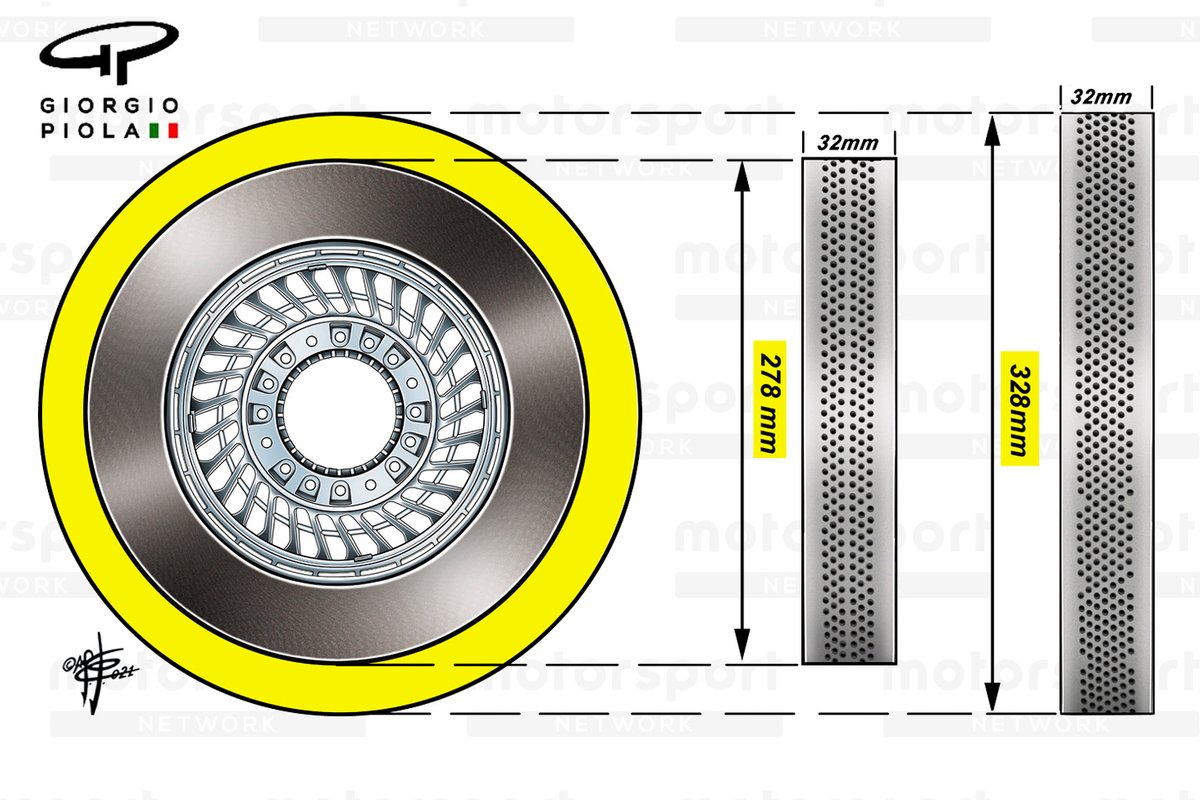 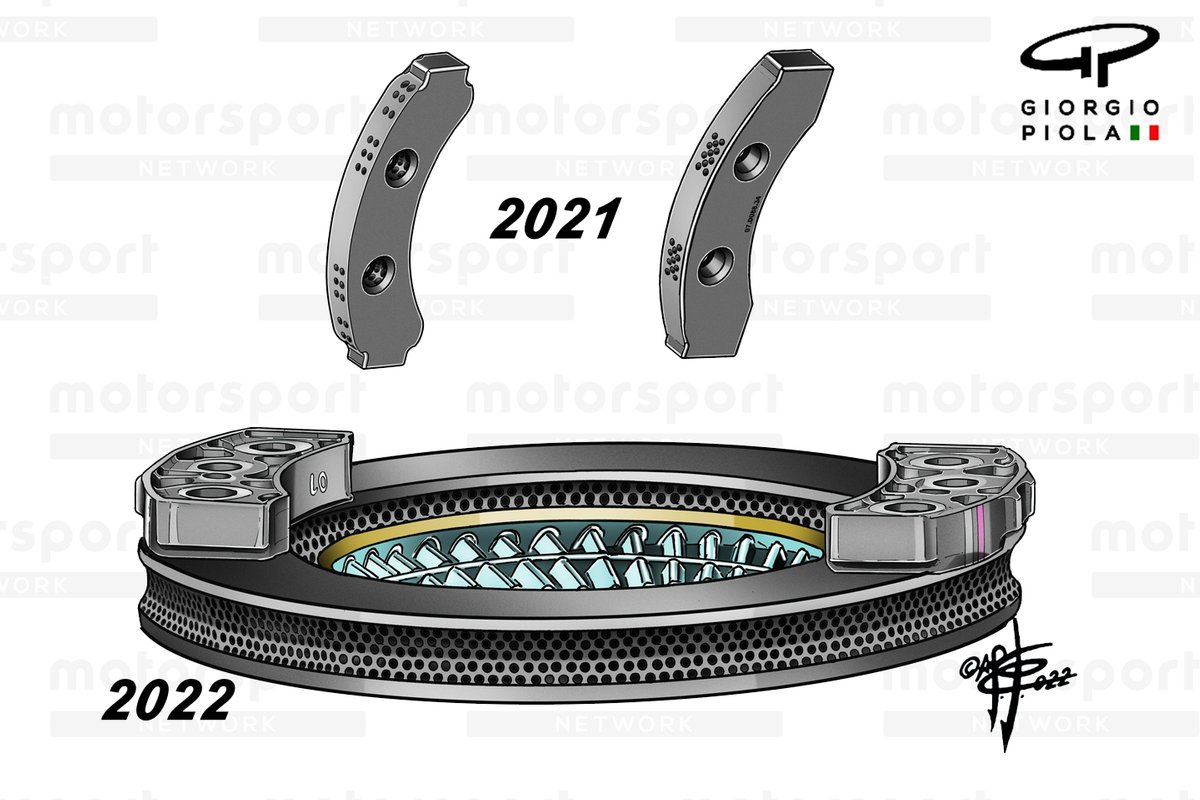 This is an area where teams spent a considerable amount of their resources during the previous regulation set. But the introduction of the new rules for 2022 has largely led to that research and development being reset.

The arrival of the standard specification 18" wheel rim has resulted in numerous dimensional changes, with the discs at the front of the car now required to be between 325 and 330mm, rather than 278mm.

Furthermore, the drill holes that reach through the disc have to be a minimum of 3mm, altering not only the way the heat is transferred but also the behaviour of the airflow.

And then there is the requirement to reject airflow passing through the brake assembly only through a rearward-facing outlet. Previously, teams had forced this out through the wheel face for an added aerodynamic effect. 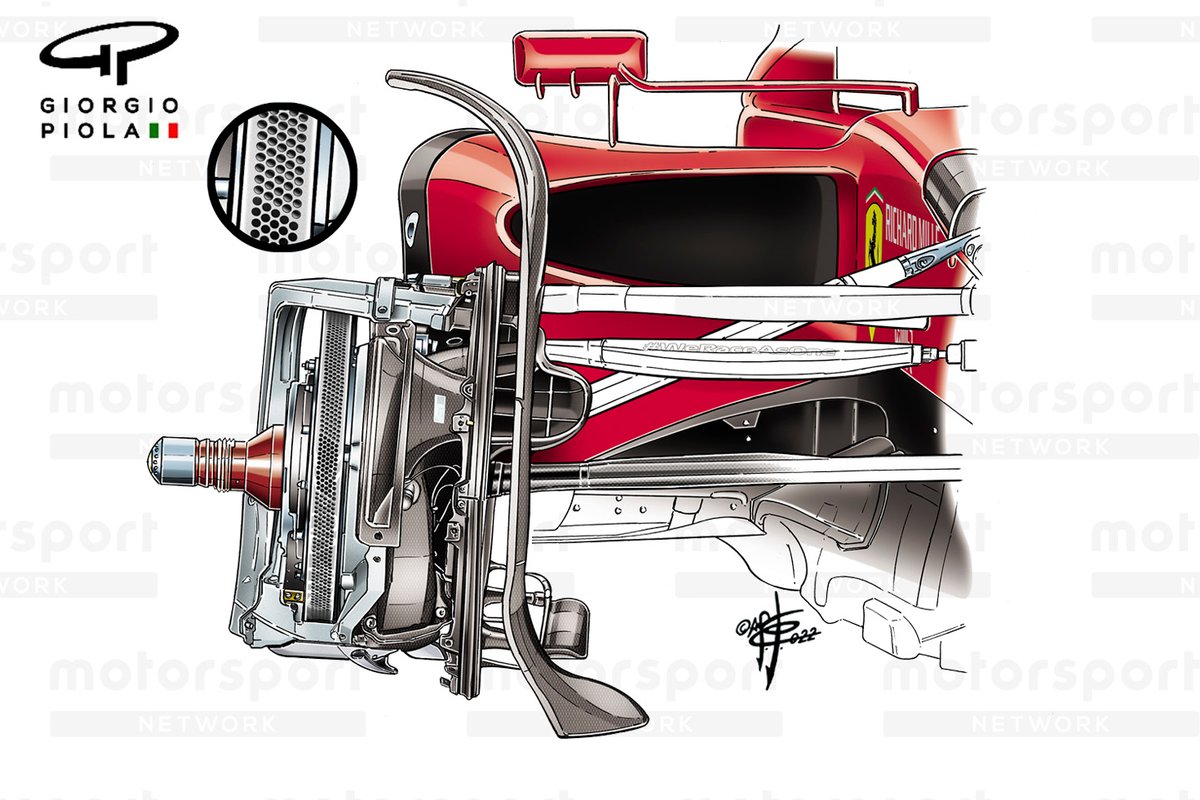 In response to these changes, we've seen Red Bull, McLaren, Alfa Romeo and AlphaTauri adopt an internal brake disc fairing. Mercedes and Williams have applied a quasi-faired solution too.

Meanwhile, Ferrari, Alpine, Aston Martin and Haas are the four teams that have left the disc exposed within the now much larger brake drum, as its size has been increased to fit within the enlarged wheel well.

McLaren's first attempts at using the fairing solution did not come without drama. While the MCL36 seemed extremely competitive during the first pre-season test in Barcelona, the team quickly discovered it had to make changes because of extreme overheating. 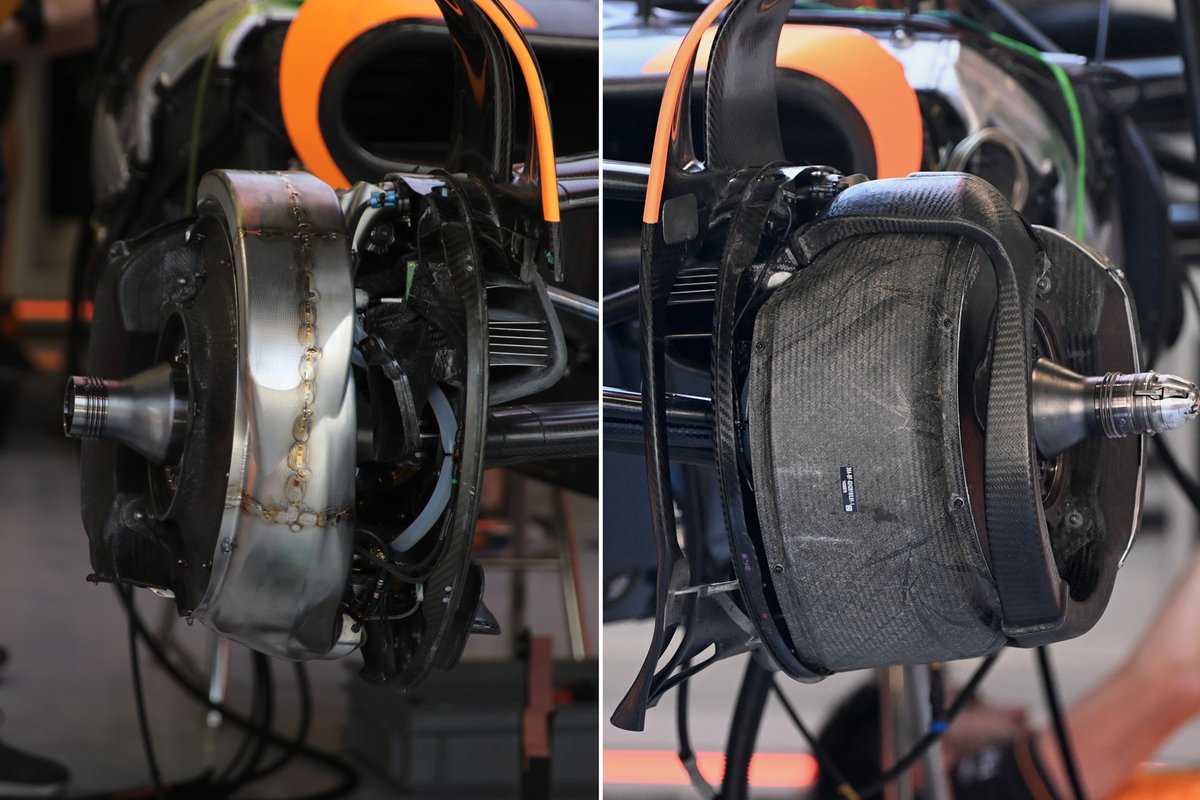 This resulted in the original carbon fibre concept being cast aside and a metal version put into service while a thorough redesign could be completed.

The new version, which arrived at the Spanish Grand Prix (above, right), resulted in a much larger fairing and required the pipework feeding cool air to the caliper to be rerouted.

While the other teams using this fairing solution didn't have the glaring issues McLaren faced, they've also spent the entire season optimising their designs to improve performance.

Using Red Bull as the example, it's easy to see how smaller changes have resulted in a breakthrough in performance, as the exposed insulation wadding used in its original design (below, left) was removed when the team redesigned the shape of the fairing.

The fairing then received numerous shape iterations to help moderate the transfer of heat between the brakes, wheel rim and tyres (below, right, red arrow, for example). 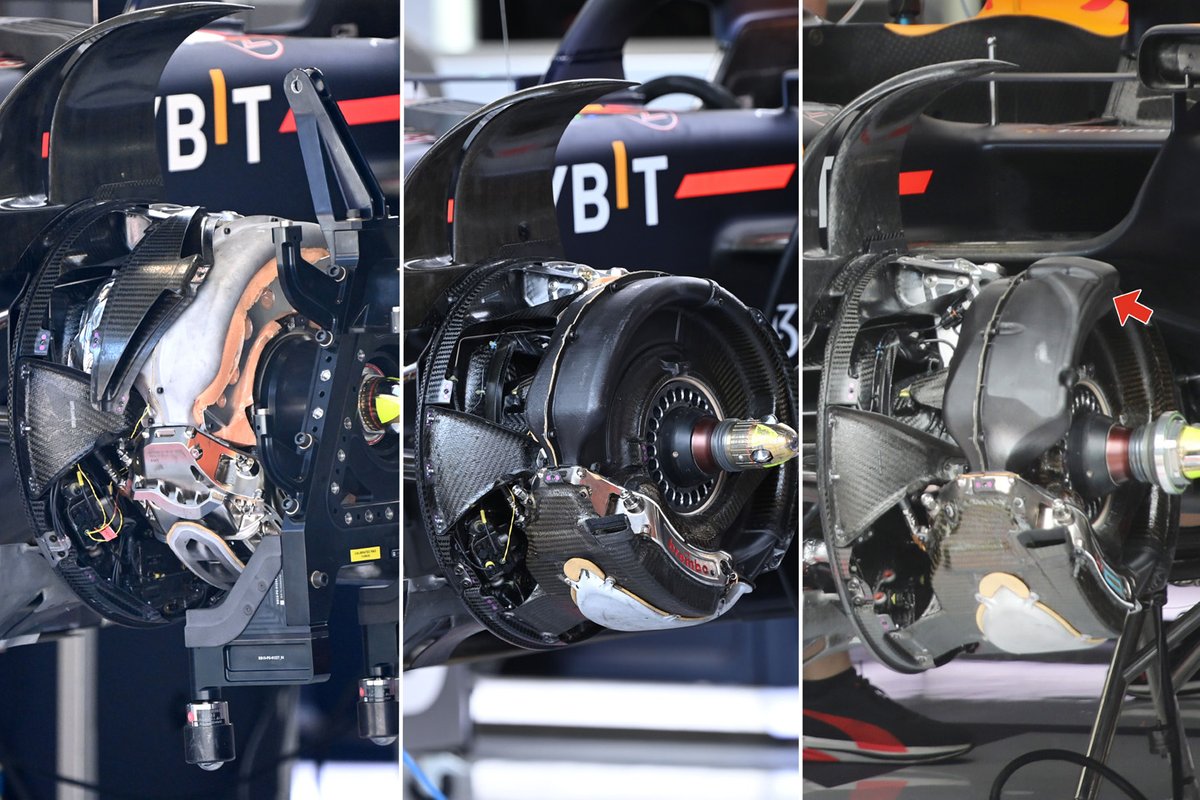 In its quest to help manage this temperature transfer, the team also applied a thermal coating to the fairing and the caliper internals (see insets, below).

Given that Ferrari has already announced it won't be bringing any major new parts to the races in the closing stages of the season, we can't expect to see the F1-75 copy the approach of its rival.

However, that's not to say that the Scuderia hasn't been paying close attention to its foes and won't look to incorporate something similar next season. 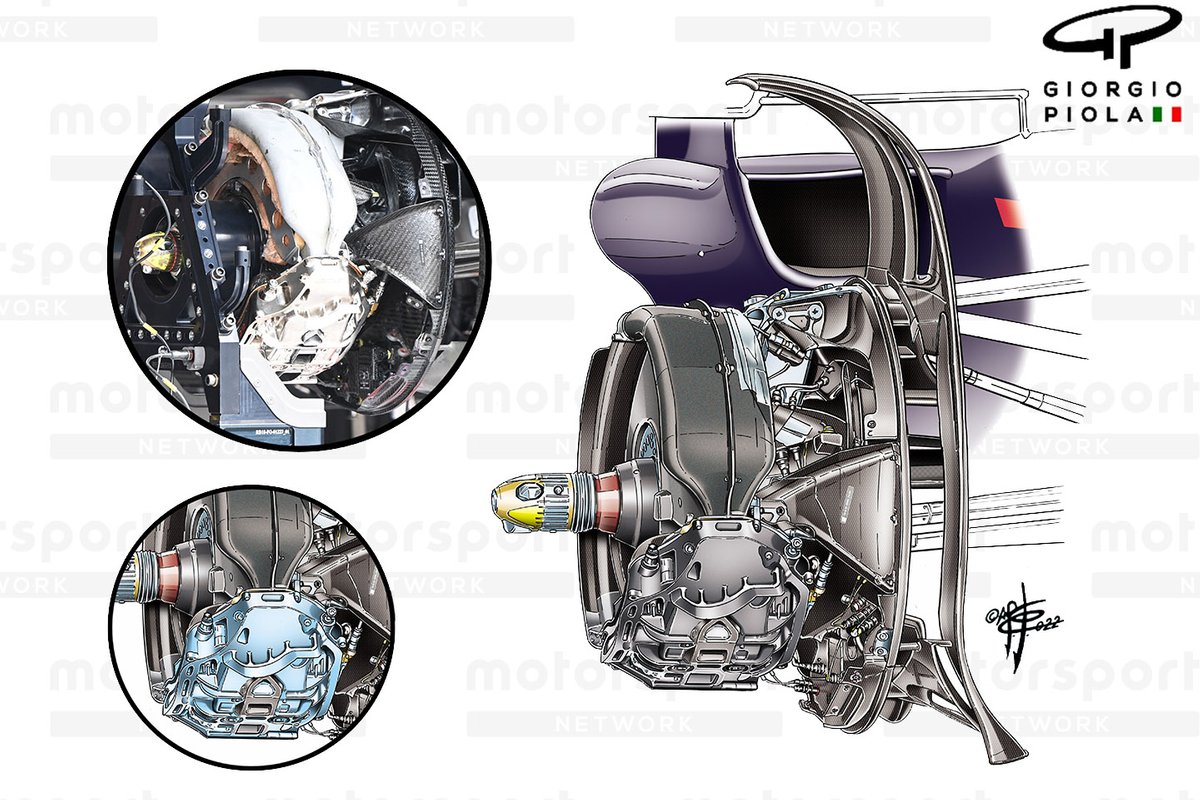