Reports emerged in Brazil this weekend that Wolff contacted Max's father Jos, in an effort to encourage Max to curb the aggression of his racing when among the title-chasing Mercedes drivers, following his brush with championship leader Nico Rosberg on the opening lap in Mexico.

"It's totally wrong," Horner told Autosport. "They've got their own business. To be meddling in other teams'... maybe he does that with Ferrari, but he shouldn't do it.

"He's got no right to tell Max how he should drive and conduct himself.

"Max is doing a great job in Formula 1 and he's employed by us to do the best he can in the races.

"That's not to wave a Mercedes through or not race it.

"I think Toto showed a certain naivety or arrogance to be calling a competitor team's driver's father."

Verstappen was reluctant to comment extensively on what he described as "a private call" that had been "a bit blown up".

Asked if he was surprised that the Mercedes team boss would contact him in such a manner, Verstappen replied: "Maybe a little bit. I think Toto is a nice person. It was just [giving an opinon] from his side". 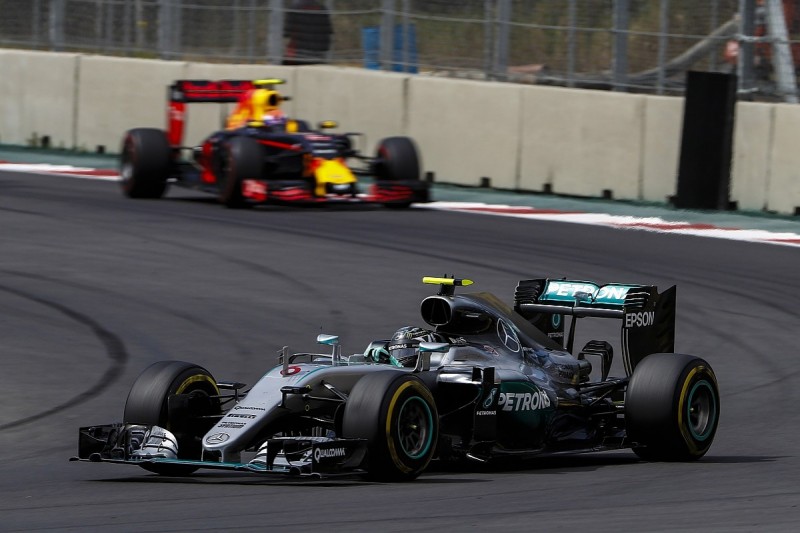 The Dutchman's team-mate Daniel Ricciardo said that regardless of the detail of what was discussed between Wolff and the Verstappens, it was inappropriate for a championship-chasing team to be trying to influence others' approaches.

"I understand it from a respect point of view, but you have to race," Ricciardo argued.

"What's different now to in Melbourne at the start of the year? We're all racing and trying to maximise our position.

"If we don't attack them or go for an opportunity, in a way we're fixing the championship by not doing that.

"The championship should be an accumulation of all those races and whatever happens, happens.

"If we're talking about a race win and going for it, I'm not going to do a kamikaze and take us both out, but if I feel it's a move I can make stick, I'm going to go for it.

"We're there to race, and for us to all cruise around and just let the Mercedes drivers fight it out doesn't make sense."

Horner added that he did not expect the conversation to have any impact on Verstappen's racing.

"Since he's driven for our team, bar one incident in Monaco, he's not put a wheel wrong all year.

"I'd rather encourage him to keep doing what he's doing than to change his approach.

"That's probably why he's the most exciting driver in Formula 1 at the moment, and why there's so much interest in him."