Christian Horner has led the tributes to “inspirational” Red Bull founder Dietrich Mateschitz, who died the age of 78 on Saturday.

Red Bull confirmed shortly before Formula 1 qualifying for the United States Grand Prix that Mateschitz had passed away following a long battle with illness.

Mateschitz brought the Red Bull brand to F1 initially as a sponsor before acquiring the Jaguar team in 2004 and turning it into Red Bull Racing for the following season. He bought a second team, now known as AlphaTauri, for 2006, and also helped revive the Austrian Grand Prix at the Red Bull Ring in 2014.

Horner joined as Red Bull’s team principal from its first season, and helped turn it into one of F1’s biggest outfits, winning four straight sets of championships between 2010 and 2013, as well as Max Verstappen’s drivers’ title in 2021.

Speaking to the media in the paddock at the Circuit of The Americas on Saturday, Horner called it “desperately sad news.”

“He is a remarkable man, what he’s done for so many, not just in Formula 1 but in the Red Bull business, in the Red Bull world, across all the sporting platforms,” said Horner.

“He was a man that inspired so much. He is the reason that we are here. It was his passion for Formula 1, and his vision that is the reason that he has two teams in the Formula 1 pit lane. He was always enthusiastic, encouraging, supportive, in the good days and the bad days.

“So many owe him so much. I feel privileged to have known him.”

Horner said the Red Bull team was now “going to do exactly what he would have wanted, which is to go out there, and with his cars, do the very best that we can, and to try and close this constructors’ championship down.” Red Bull will clinch its first constructors’ title since 2013 in Austin so long as it is not outscored by Ferrari by 19 points. 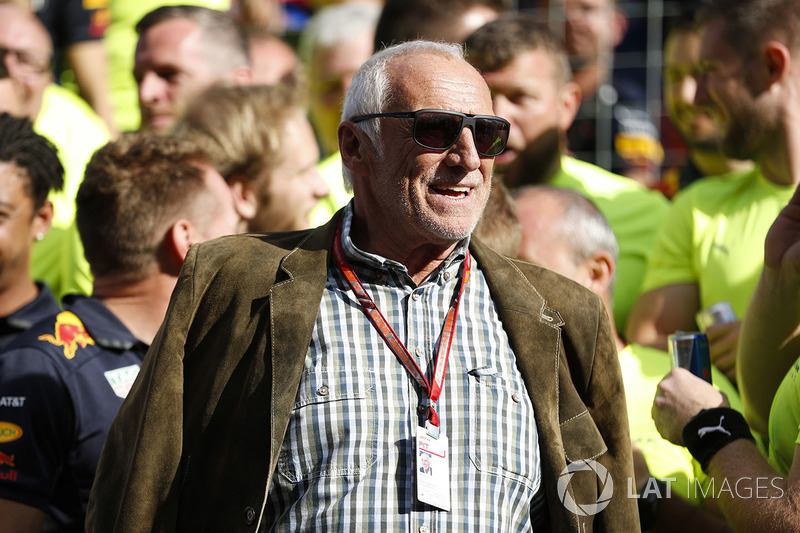 “It’s important that we recognise everything that he has contributed to the sport,” Horner added. “Not just to the sport, it goes way beyond that.”

Asked what his overriding personal memory was of Mateschitz, Horner called the Red Bull founder “inspirational”, noting his attitude and willingness to chase ambitious goals.

"He gave me a chance as a young guy, he backed me, and he inspired so many others,” said Horner.

“He gave so many people an opportunity. He encouraged you that nothing is impossible, that nothing is unsurpassable, and to follow your dreams. he was a fan of Formula 1.

“He was hugely proud of everything that we’ve done. The big thing now is that he’d want to see us go out there and give it everything, and we’ll be doing that today for him.”

As the news of Mateschitz' death spread through the Austin paddock shortly before qualifying, tributes soon started pouring in from Red Bull's rival teams.

Mercedes' Toto Wolff recognised the fellow Austrian's "unprecedented" impact on Formula 1, calling him "one of greatest and most visionary entrepreneurs in the world".

Ferrari said it was "deeply saddened to hear of the passing of Dietrich Mateschitz. A man who loved our sport and challenges."

Ferrari chairman John Elkann also gave his own tribute to Mateschitz and his legacy in motorsport: “I am grateful to Dietrich Mateschitz for all he has done for motor racing and will remember his passion and courage as an entrepreneur and as a man who always loved new challenges.

“On behalf of everyone at Ferrari, I would like to offer our condolences to his family and to our friends at Red Bull Racing and AlphaTauri. Our thoughts and sympathies are with them all.”

Aston Martin paid tribute to "a great man whose impact on our sport cannot be overstated".