Christian Horner has outlined Red Bull’s plans for Daniel Ricciardo should he sign as a third driver for 2023, but ruled out a future possible full-time Formula 1 seat.

Ricciardo is set to make a return to Red Bull in 2023 in a third driver role after losing his seat with McLaren for next year at the end of August.

Red Bull advisor Helmut Marko revealed on Sky Germany yesterday that Ricciardo would be joining as a third driver, but it emerged the Australian is still yet to sign an agreement.

Red Bull F1 chief Horner confirmed on Saturday that no deal has been signed yet, but that Marko “in his enthusiasm has obviously announced it.”

Horner said Ricciardo was “still one of the biggest names and biggest characters in Formula 1”, making him an ideal option to have in a third driver role.

The position will see Ricciardo conduct a number of marketing duties such as demonstration runs, as well as offering support in the simulator to race drivers Max Verstappen and Sergio Perez.

“With the demands that are on the race drivers these days, just from a marketing perspective alone, that we’re very active as a team, we do many, many show runs and events,” explained Horner.

“To have a driver of Daniel’s profile and history with the team within the group is only an asset for us. It means that he keeps in touch with Formula 1, and we’ll obviously be using him on the simulator as well.

“He’ll be attending potentially some events, of course if he does sign a contract. I’m sure that will all become clear in the event of him signing a contract.”

Ricciardo raced for Red Bull between 2014 and 2018, scoring seven of his eight grand prix victories with the team and twice finished third in the drivers’ championship. 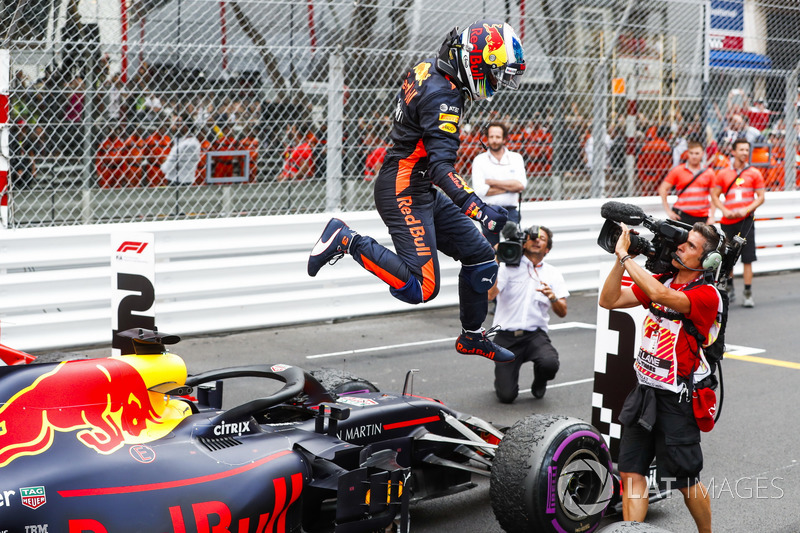 Ricciardo celebrates winning at Monaco in 2018 for Red Bull

Ricciardo has made clear that he wants to make a racing return to F1 in 2024 if possible, but Horner ruled out the chance of the Australian becoming a longer-term option for Red Bull as a race driver, noting the current agreements in place with Perez and Verstappen.

“No, Daniel’s contract is very specific for a specific reason,” said Horner.

“We have a contract with Checo for the next two years. What the partnership of Max and Checo has produced has been phenomenal for us, and the five 1-2 finishes so far this year, the constructors’ championship that we haven’t won for eight years is a phenomenal achievement, and obviously the combination of both drivers’ points contributions.

“The two drivers, they do have a good relationship. They’ve raced well for the team, and we’ve got no reason to see that being any different tomorrow or for the duration of their contractual commitment to the team thereafter.”