Red Bull team boss Christian Horner says there is "not one ounce" of him that wishes Ferrari was putting up a closer fight in the Formula 1 championship battle.

Max Verstappen’s brilliant charge from 10th on the grid to grab victory at the Hungarian Grand Prix has helped the Dutchman open up an 80-points advantage in the F1 drivers’ standings.

But after another race where Ferrari had a golden opportunity to help Charles Leclerc close down Verstappen’s lead, only for its strategy to wreck it, some are ruing the fact that the championship battle seems all but done.

It is a world away from the intensity of last year’s campaign where Red Bull was locked in an ultra-close title fight with Lewis Hamilton and Mercedes that went all the way to the final round.

Asked after the Hungaroring race if there a part of him that wanted things to be a bit closer between him and Ferrari, Horner said: “There's not one ounce of me that wishes that.

“Last year was a heavyweight bout that went 22 rounds. And I'd prefer not to have to go through that again.” 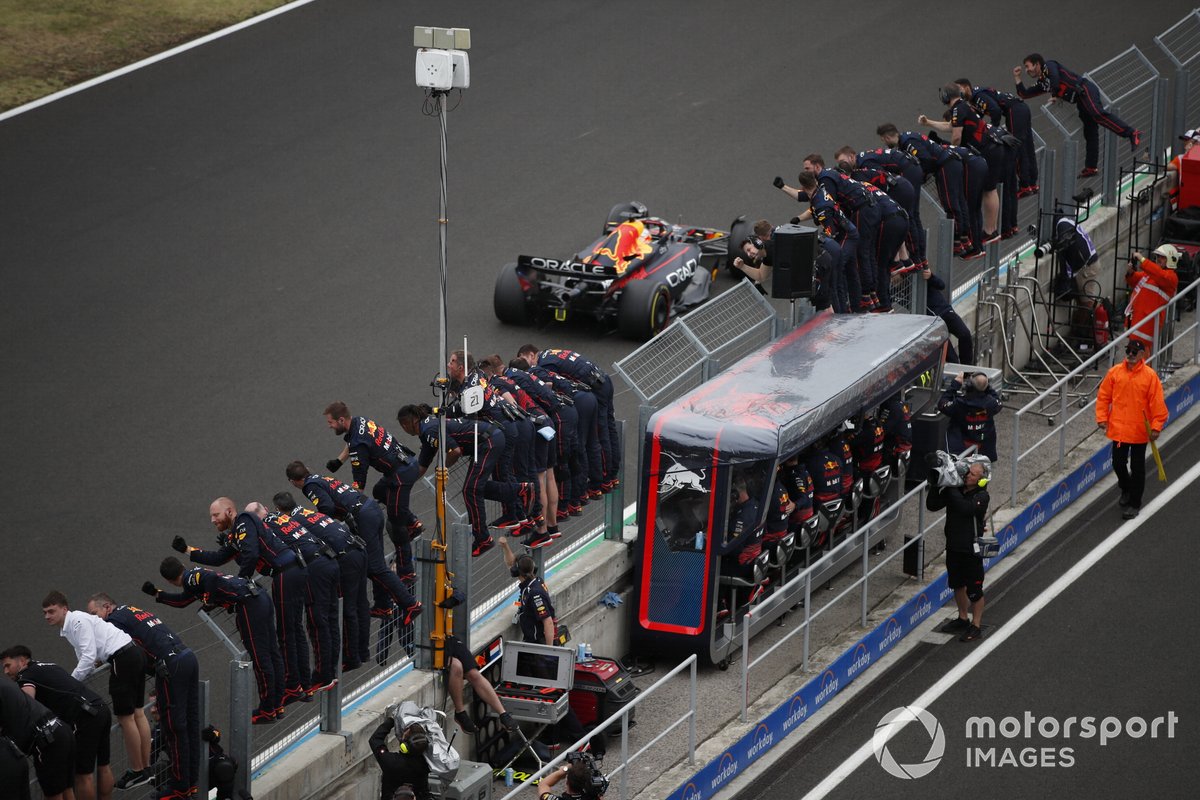 Max Verstappen, Red Bull Racing RB18, 1st position, takes the chequered flag to the delight of his team on the pit wall

But despite Red Bull and Verstappen appearing to have one hand around the championship trophies, Horner remains cautious that the titles are not won yet.

“The points tables look healthy, and it's a great way to sign off into the summer break,” he said.

“But there is still a lot of racing to go. Ferrari are quick, Mercedes are coming back into the game. There's still a long, long way to go in this championship, plus a sprint race.

“We don't take anything for granted. There's still a lot of racing to do. And they're very different venues.”

Red Bull’s dominance of the championship this year has come despite it not having the quickest car at times – and it has been further boosted by Ferrari's reliability and strategy problems.

However, Horner reckoned one of the key strengths that it has shown is in not getting too far ahead of itself – as he made a cheeky reference to comments from Ferrari team principal Mattia Binotto after the French GP where he had targeted a 1-2 finish in Hungary.

“I think even if we'd won by a lap, I'd still have always been naturally [cautious],” said Horner. “I would never make a claim that we're going to finish first and second in the next race.

“It's the way we go racing. We focus on the here and now and take each race as it comes.”