Lewis Hamilton thought “for a second” he might be able to hold off Max Verstappen and end his Formula 1 win drought in Austin before being overtaken late on.

Hamilton sat second behind Verstappen for much of the United States Grand Prix on Sunday, but moved into the net lead when a wheel gun failure in the pits resulted in an 11-second stop for the Red Bull driver.

Once Verstappen returned to the track, he was six seconds behind Hamilton’s Mercedes, but managed to overtake Ferrari’s Charles Leclerc and close up to Hamilton before regaining the lead with seven laps to go.

It was the closest Hamilton has come this season to scoring a win, and he said afterwards that it “felt amazing to even just be in shooting distance of Max for some points of the race.”

“We really didn't know what our pace was going to be like on Sunday,” said Hamilton.

“I think in the first stint he was controlling the pace and it was very difficult to hold on to him. But in that second phase of the race, after the safety car, I was able to keep up with him and we did such a great job with strategy today. We were aggressive.

“I really am proud of the team. I think everyone worked so hard to bring upgrades here this weekend.

“For a second I thought maybe we might just be able to hold on to it. But I think that extra medium tyre they had was just a little bit too strong compared to us.” 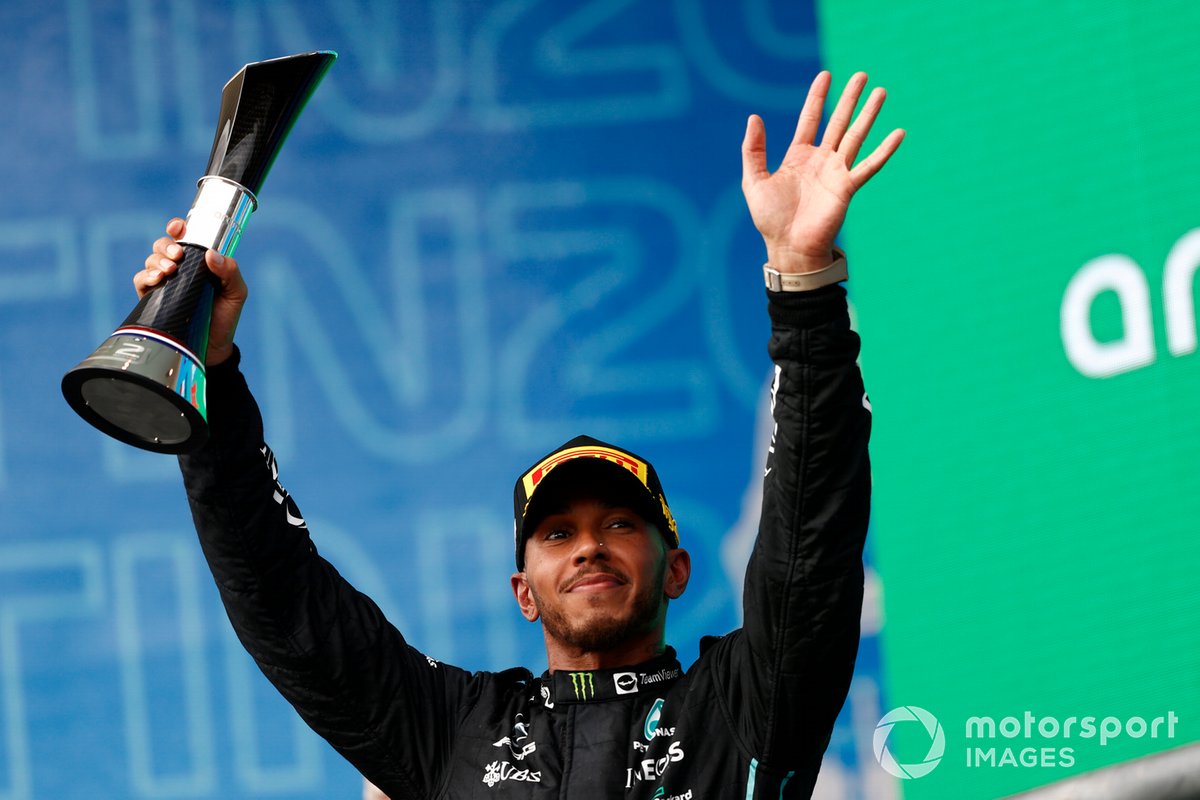 Verstappen’s extra set of mediums meant he had a tyre advantage for the final stint over Hamilton, who was forced to run hards to the chequered flag.

Hamilton was able to stay within a second of Verstappen for a few laps after being overtaken, only to then drop over five seconds behind by the end of the race.

Mercedes F1 team principal Toto Wolff admitted he thought Hamilton had a chance of winning when Verstappen was stuck behind Leclerc, who had jumped the Red Bull in the pits.

“At some stage when they were six seconds behind him, and it felt like they can’t really eke out enough, I felt that [he could win],” said Wolff.

“Lewis had the tyre deficit on the hard, because he simply didn’t have any mediums any more, and still holding on to a potential win, it felt feasible at that stage.

“But once Max was past Charles and he couldn’t fight back, I think it was just waiting for it to happen.”

Hamilton has three races left this season to avoid the first winless campaign of his F1 career after a difficult year for Mercedes adjusting to the new technical regulations.

The team started the season far behind Red Bull and Ferrari, but has made gradual progress through the year to get closer to competing at the front.

The Mercedes W13 car got its final upgrade in Austin, which Wolff felt had offered a boost in performance.

“Maybe we expected sometimes too big steps, but it was respectful where we were this weekend,” he said.

“It was respectful in qualifying. We could have had a really good lap, but then the drivers couldn’t put it together.

“But I think it was a step forward. As long as the trajectory is upwards, it’s like a share price, there will be ups and downs.”