Hamilton says "not spectacular" Mercedes slower than expected in France

Lewis Hamilton says "not spectacular" Mercedes is slower than it expected to be at Formula 1’s French Grand Prix after Friday's practice.

The German car manufacturer had come into the Paul Ricard weekend tipped as one of the contenders for a race win, with the ultra-smooth circuit supposedly perfectly suited to its W13.

But Hamilton and teammate George Russell could not get near the pace of the leading Ferrari and Red Bull cars, as they ended up fourth and fifth fastest in the second session.

With Russell seven tenths off pace-setting Carlos Sainz, and Hamilton a further two tenths back, the duo admitted that things had not gone as well as they had hoped.

Hamilton said: “We have a lot of work to do, a lot of ground to cover still.

The car is not spectacular here and we don't know why. But I'm sure hopefully overnight, we can make a bit of a step. So I'm hoping that's the case tomorrow.”

The seven-time champion reckoned that Mercedes was paying the price for a downforce deficit rather than being slowed by any of the porpoising issues that blighted its form earlier in the campaign. 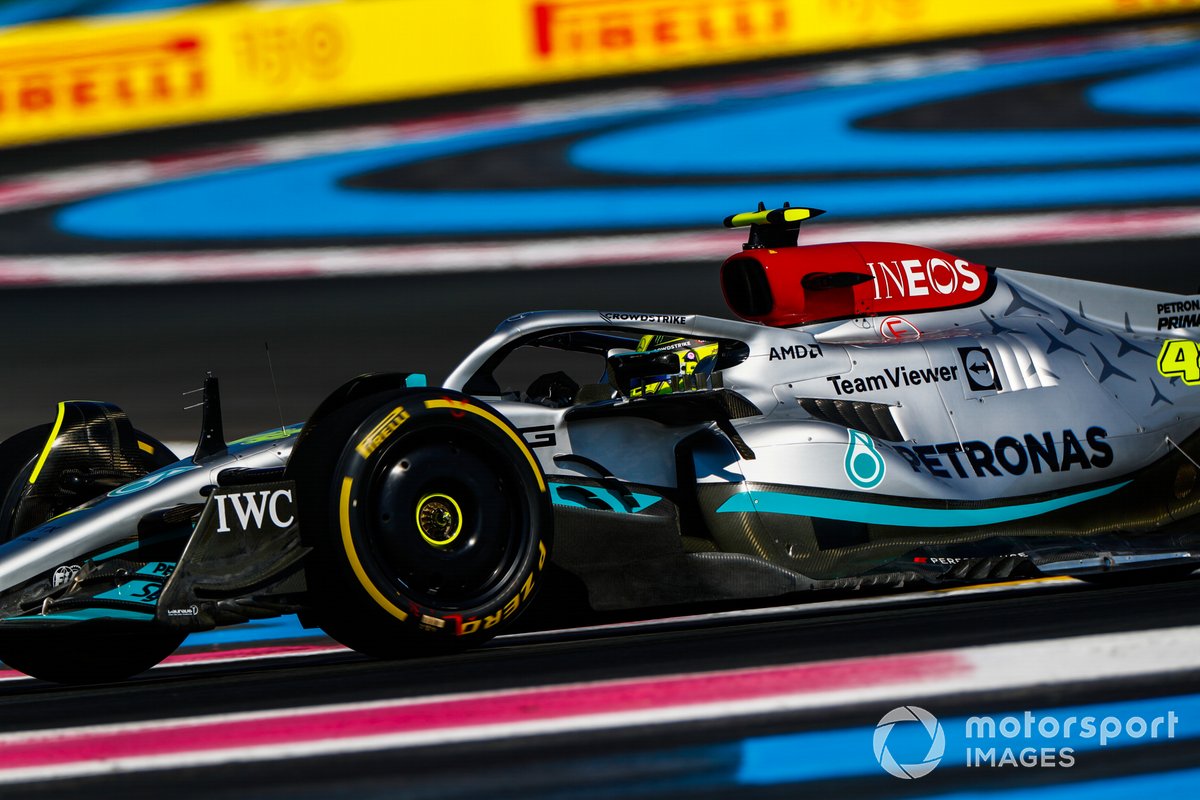 Asked where the car was lacking, Hamilton said: “Just everywhere. It's just every corner.

“I'm going to have to dig deep into the data. But it just feels like we're lacking downforce today. But otherwise, it's okay.

“I mean, I can only have empathy for the guys that are even further back.

"I think generally, this generation of car is definitely nowhere near as good as it used to be in terms of grips and stuff that we had in the past. But it also is the first year of this generation.

“I'm sure it'll get better over the years. But yeah, we have work to do. We're a little bit further behind than we anticipated this weekend.”

Russell reckoned Mercedes was better in race trim than on single-lap pace, but said the squad could not afford to have a poor qualifying and fall into the midfield pack if it wanted a realistic shot at a podium.

“I think our high fuel pace was probably better than our low fuel pace, so we need to make sure we optimise tomorrow to make sure there's no midfield cars in between us and the front four,” he said.

“But I think the Ferrari is probably stronger than us, and I think Max looks very fast as usual. So work to do.”

While expectations had been high coming into the weekend about the potential, Russell reckoned the squad was far from favourite to pull off a win.

“Outside shot is probably the way to put it,” he said.

“We're probably a little bit further off the pace today than we would have hoped. Work to do tonight and back at the factories. But never say never.”