Mercedes remains adrift of the fight at the front of Formula 1 right now, with its focus still on solving the porpoising problems that are holding it back.

Until it can cure the bouncing phenomenon, it does not want to pursue more traditional updates as it cannot be sure that it will take the W13 in the right direction.

That is why its focus so far has been on more minor tweaks aimed at making slight changes to the airflow, and some in-weekend experiments between Lewis Hamilton and George Russell to try to find the right downforce/drag levels.

With the team still using its launch-spec high-downforce rear wing, the variability in its choices for the drivers relate to how much of the wing is cut away, plus the option of a Gurney flap.

At Imola, the two Mercedes were given different wing settings to try to help the team work out what the best solution was. 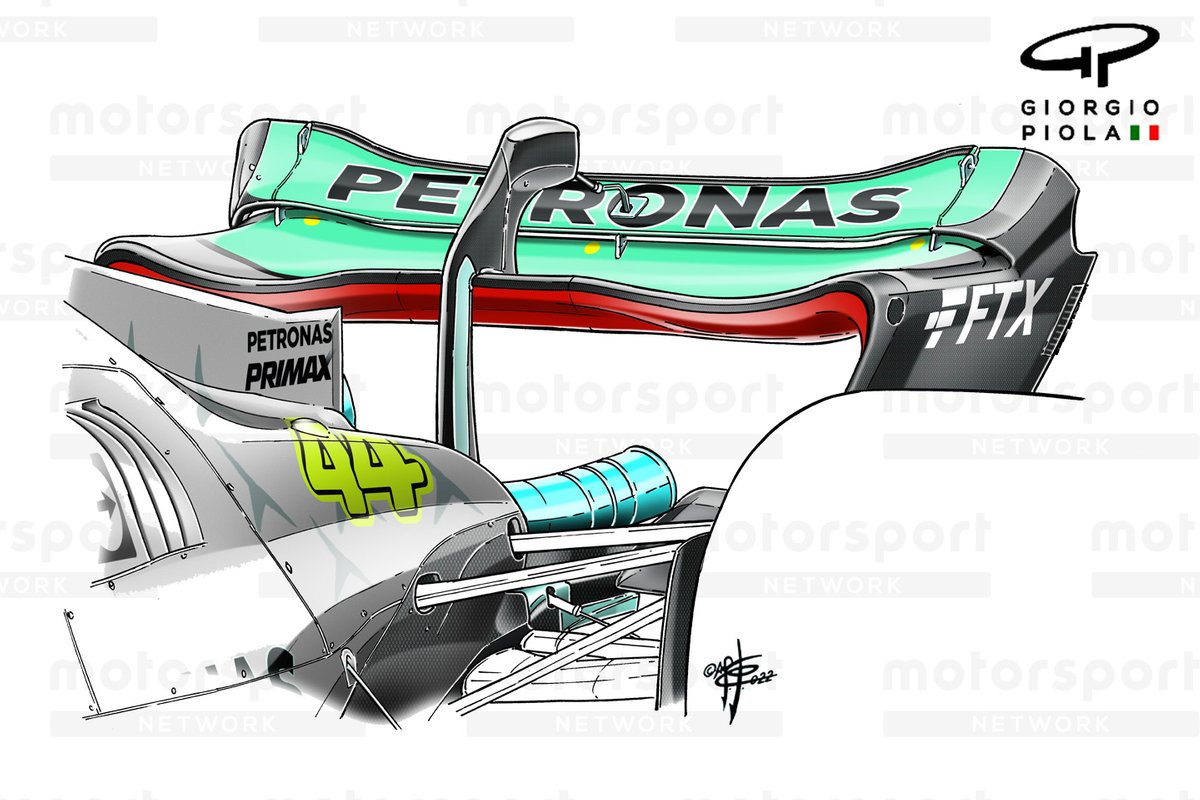 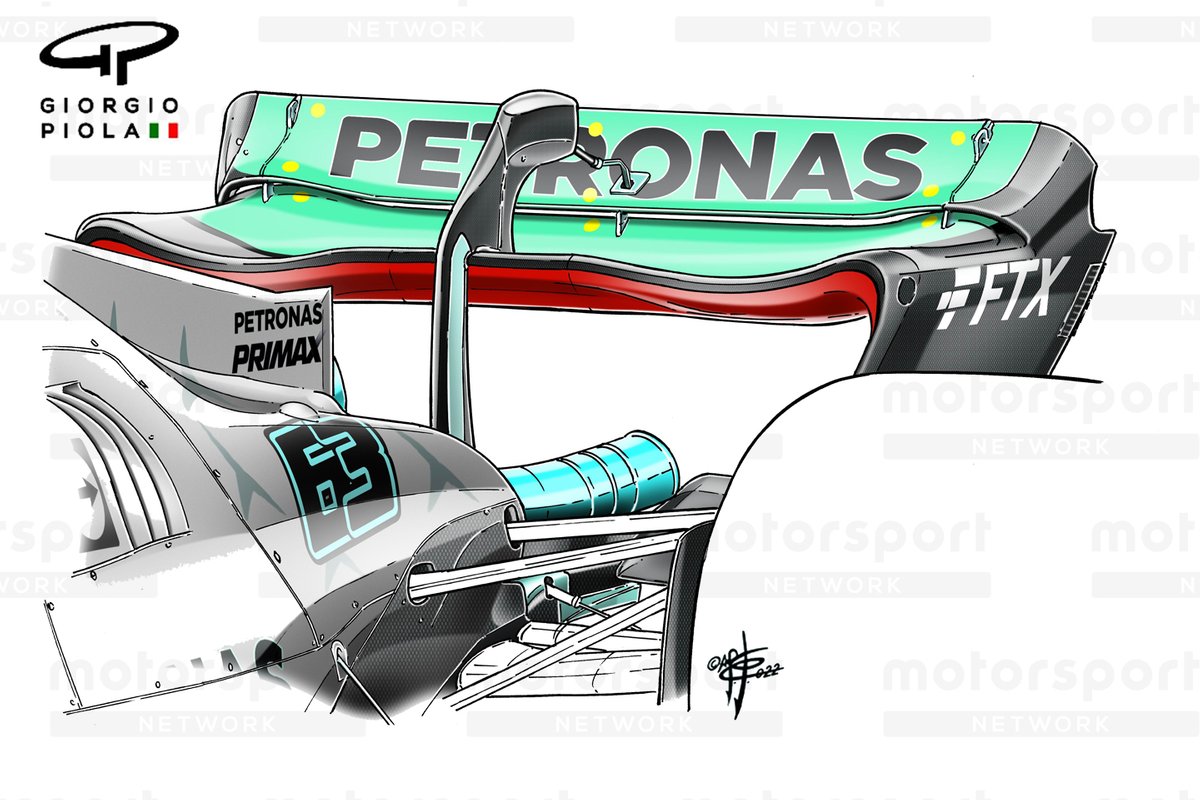 Hamilton used the rear wing which features a cut-out in the trailing edge of the upper flap, along with a Gurney trim during FP1, while Russell started out with the higher downforce version.

In the end, it was decided that the higher downforce solution was the best way to go, so Hamilton's car was switched across to that one from the start of qualifying - when parc ferme conditions began.

"[It was] a slight difference but not so much as it will change the way the cars are behaving," he said.

"We've just got Lewis on a slightly lower level than George. But you're just talking a couple of kph on the straights."

As well as trying to work out the ideal wing settings, Mercedes also introduced some aerodynamic updates at Imola aimed at helping improve airflow and boost cooling. 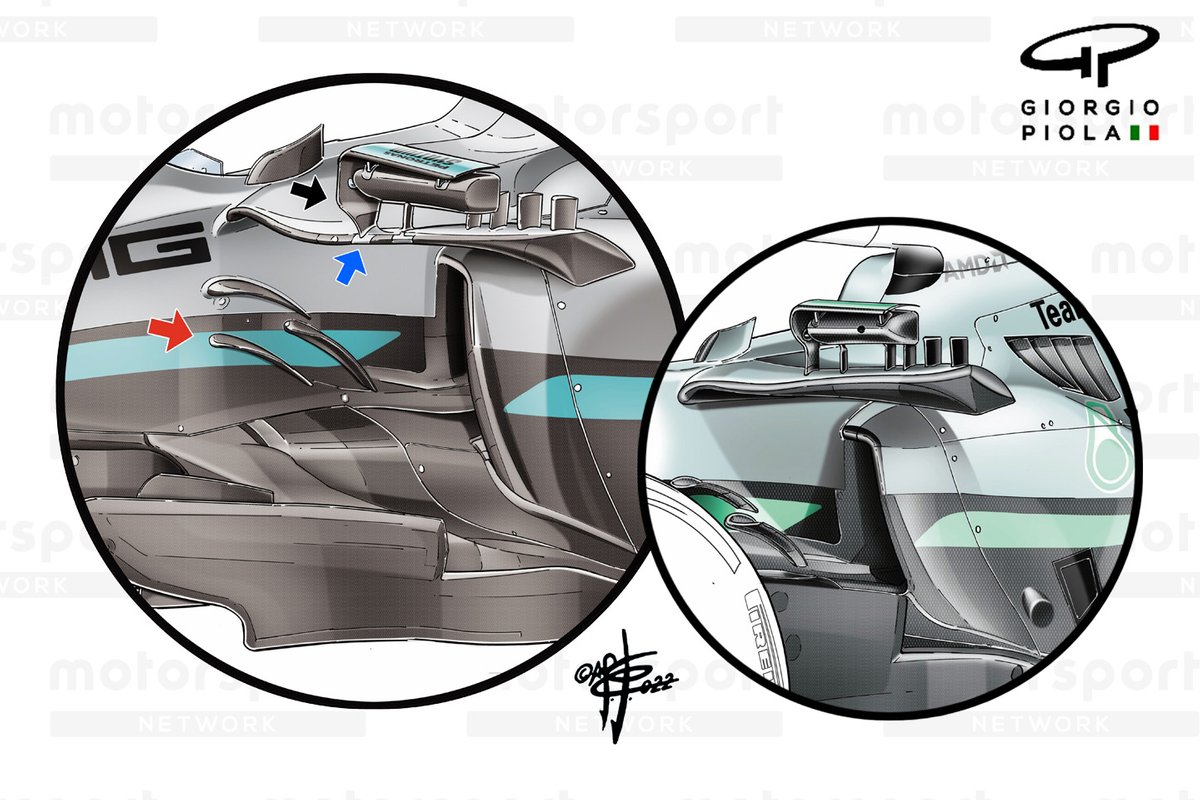 The changes included a revised sidepod impact spar (SIS) fairing, with the shape altered not only to work in conjunction with the new mirror housing but as a means to exploit more performance from the introduction of a new fin on the chassis ahead of the sidepod inlet.

The introduction of this third fin (red arrow) resulted in the two other fins already mounted on the chassis being moved upwards too.

The modifications should help to further tidy up the airflow ahead of the slender sidepod inlet, improving cooling and help divert the remainder of the airflow around the sidepod's flank.

The alterations to the SIS fairing's shape might not seem obvious at first glance but the thickness of the leading edge of the wing-shaped element has been reduced quite significantly.

This has allowed the wing mirror stalk to be moved forward (blue arrow), with a metal insert used to prevent it from flexing too much.

The mirror stalk has also been modified too, in order to take advantage of the new position (black arrow). 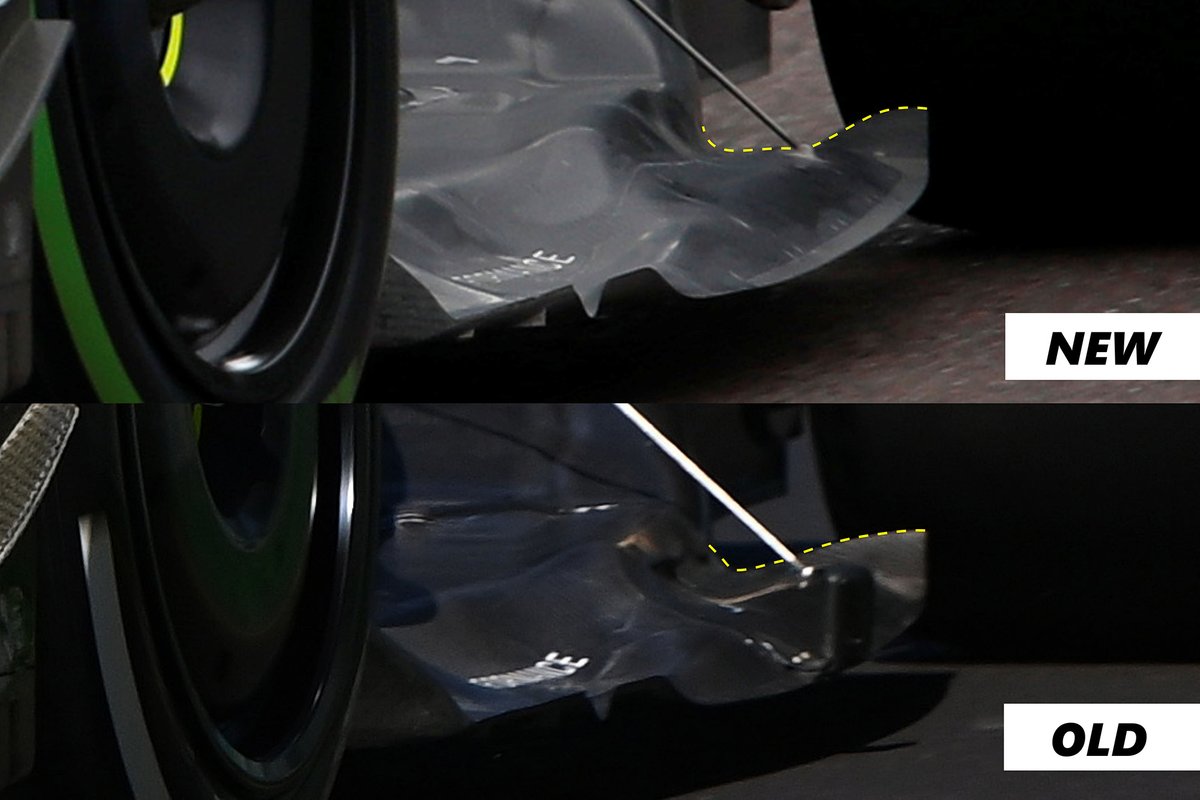 Mercedes made two further changes that will have a combined effect. These were on the curl on the rear edge of the floor and the lower rear brake duct deflector.

These two surfaces play a role in dealing with the wake and squirt created by the sidewall of the tyre and by altering their geometry they'll have an impact on the aerodynamic characteristics of the tyre as it deforms.

As you can see, the upturned curl on the trailing edge of the floor (yellow dotted line) concludes much more abruptly in the new specification, altering how the pressure builds across the surface and the route that the airflow then takes.