Lewis Hamilton conceded that Red Bull was "too fast" for Mercedes to beat in Formula 1's Mexican Grand Prix, after its hopes of a strategic victory failed to pay off.

Both Hamilton and George Russell began the race on medium tyres with Mercedes trying to counter Red Bull's start on the soft rubber, as Max Verstappen wanted to cover off the threat of a run into the first corner.

Although it seemed that Mercedes was going to attempt to go long into the race on the mediums and switch to softs at the end, the team instead made the jump to hards with Hamilton before half-distance, with Russell following suit.

The pair could occasionally match the Red Bulls on pace, but the gambit of waiting for the medium tyres on Verstappen and Sergio Perez's cars to fade away did not work as tyre wear proved low throughout the race.

"I was so close I think in that first stint," Hamilton said of his initial stint on the medium tyres, "but I think the Red Bull was just clearly too fast today. Ultimately maybe they had the better tyre strategy.

"I’m not sure [the hard] was the right tyre in the end. I thought we should have started on the soft, obviously we had the opposite tyre.

"It was OK in the first stint, but the hard tyre was just offset. Congratulations to Max, it’s great to be up here and separate the two." 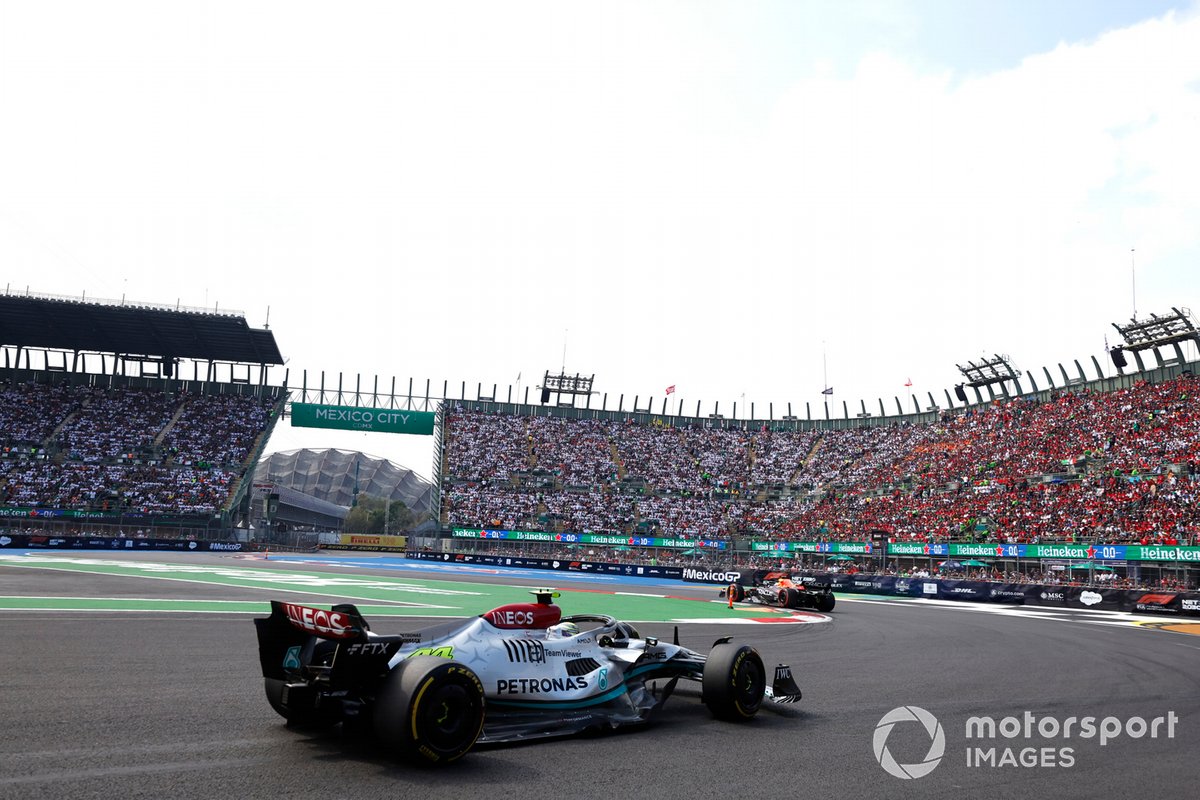 Hamilton had to be content with second, 15s off Verstappen by the end as the Red Bull pace showed little sign of dying down.

The Briton had been around two seconds behind Verstappen on the opening stint as the race settled down, but was unable to arrest the steady progression of the gap out in front.

Verstappen then made a gain of time in the pitstop phase and got his lead to over 10s as Hamilton struggled to stabilise the gap on the hard tyres. This grew amid the virtual safety car period for Fernando Alonso, as the Alpine driver's engine died in the late stages of the race.

Perez had got close to Hamilton in the second phase of the race, even getting to within DRS range, but the Mexican was unable to find a way past at his home race.

"I gave my best today, and really pushed hard," Perez said after the race. "[But] overtaking is so difficult. As soon as I got behind him, it was really difficult to follow. I had to take third."

Verstappen: Sky F1 boycott in Mexico due to ‘constant’ disrespect