Lewis Hamilton feels "proud" that Toto Wolff will continue to serve as Mercedes' Formula 1 team principal for the next three years, calling him "a great figurehead"

Mercedes announced on Friday that Wolff would remain in the role of team principal and CEO of its F1 team until at least the end of 2024, having also increased his shareholding in the team.

British chemicals giant INEOS has bought a 1/3rd shareholding in the team, making it an equal owner alongside Wolff and Mercedes' parent company, Daimler.

The announcement put an end to speculation about Wolff's future with Mercedes, having previously talked of how serving as team principal since 2013 had started to take its toll.

It leaves Hamilton as the only senior member of the current Mercedes team yet to finalise his 2021 plans, but the seven-time world champion is set to sign a new contract in the near future.

Asked for an update on his contract negotiations with Mercedes, Hamilton said they "haven't started the conversation", but that he and Wolff "plan to do that over the coming days".

Hamilton went on to express his delight that Wolff had committed his future to Mercedes, and was pleased to see 2020 sponsor INEOS step up as a shareholder.

"On the super, super plus side, I'm really proud and grateful to see Toto's signing," Hamilton said.

"He's such an important leading figure within this team, and the success that we have achieved would not have been possible without him.

"He is such a great figurehead, and I think that the team is just better for it, to have that longevity, and it's great to see that commitment from Mercedes.

"But the added bonus of having INEOS who came in this year and have been a part of our success this year, it's great to see they're going to be a part of this team and help with the stability of this team moving forward in growing to be better. 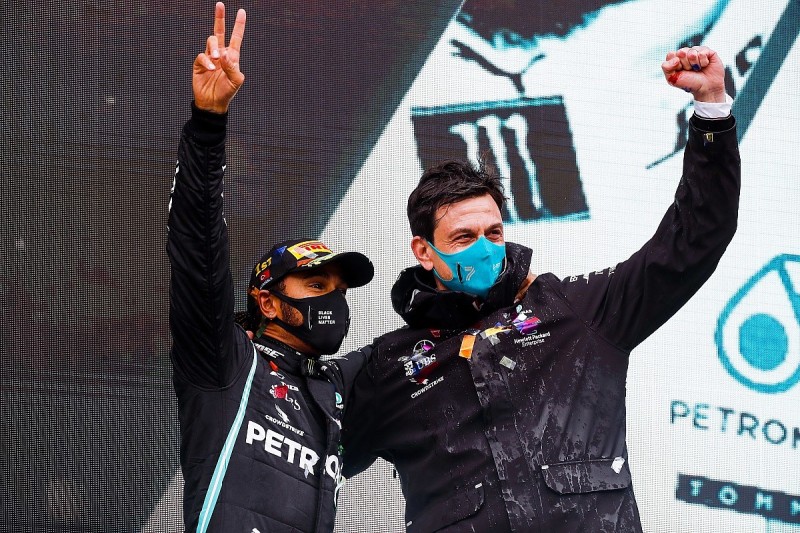 Autosport's top 50 drivers of 2020: Find out where Hamilton ranked

"It's going to take a big push for us to continue to raise the bar in this organisation, because I think we've done such a great job over these past years.

"But I think the right people are in the right place, and it looks good. The future looks bright for this team I think."

Hamilton was honoured as F1 world champion for a seventh time in the FIA Prize Giving on Friday night, ending a momentous season for the Briton in which he matched Michael Schumacher's record number of championships.

But Hamilton noted the difficulty of the year amid the COVID-19 pandemic, and thanked F1 for its efforts to get the season completed with 17 races.

"It's been an incredible year in terms of the team's success, but such a rollercoaster of emotions this year with so much happening with the pandemic," Hamilton said.

"On the one side, I'm truly grateful that Formula 1 got us back racing and got us back to work, and we got to do what we love doing.

"But then the thought of isolation for everyone around the world and all the difficulties people have experienced, losing their jobs, so many different things, as I said, it's a rollercoaster of emotions.

"In the end, I'm just truly grateful for the team's efforts to provide us a car with which we can fight for a championship. I'm grateful that we were able to race this year, because there was a period of time where we didn't look like we would be."