Lewis Hamilton says he has no answer for his Formula 1 qualifying crash in Austria on Friday that left him “incredibly disappointed”, believing a top-three finish was possible.

But after setting a quick time through the first sector at the Red Bull Ring during Q3, Hamilton lost control of his Mercedes W13 through the left-hander at Turn 7, causing him to crash into the barrier on the right-hand side of the track.

Hamilton was unharmed in the incident, but will now start Saturday’s sprint race from 10th place on the grid after abandoning his initial effort in the final stage of qualifying due a small mistake at Turn 3.

Hamilton called the crash “a big hit” but confirmed he was OK, although he felt “incredibly disappointed in myself.”

“I’m so sorry to the team, everyone worked so hard to put this car together and I never like to damage it, bring it back damaged,” Hamilton said.

“We were fighting for top three, I think. I don’t have an answer for it. I just lost the back end in Turn 7 and that was that.”

The setback came after Mercedes appeared to take another step forward with its car performance over the British Grand Prix last weekend after bringing a raft of updates to Silverstone. 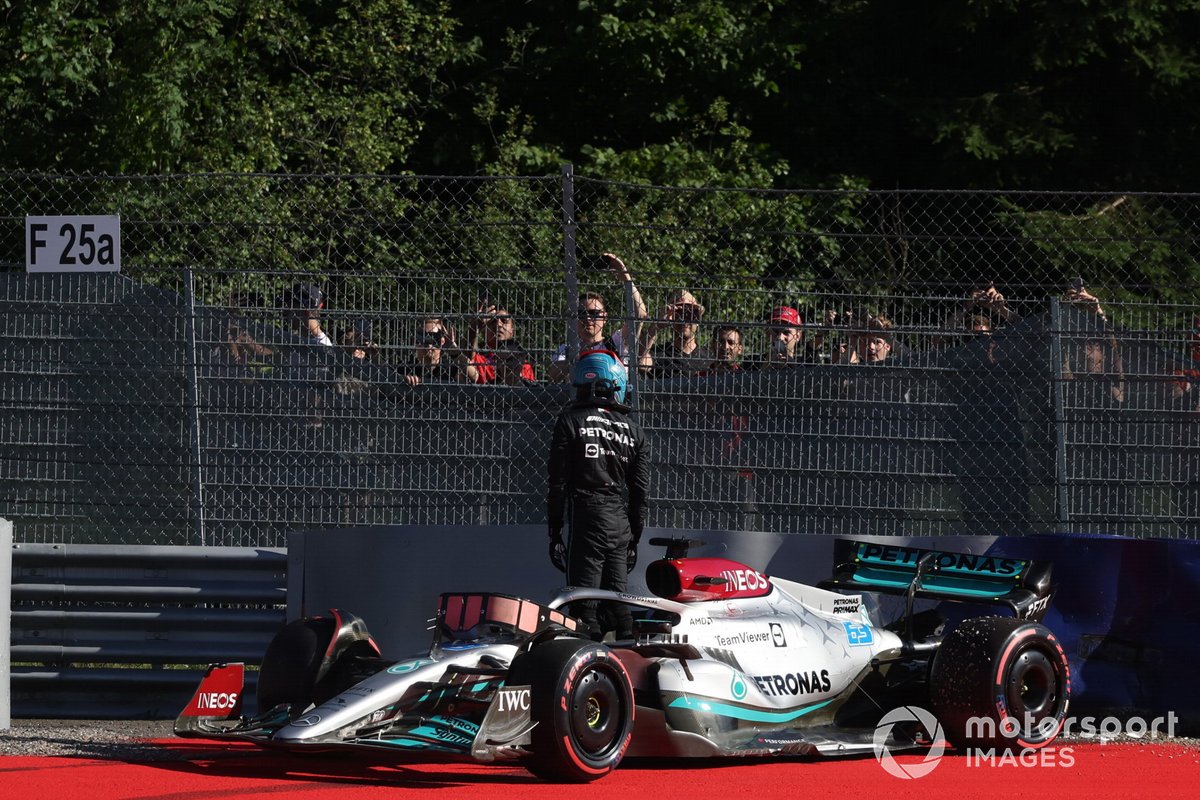 George Russell, Mercedes W13, climbs out of his car after crashing out in Q3

Things went from bad to worse for the Silver Arrows later in qualifying as Hamilton’s team-mate, George Russell, also crashed out, losing control at the final corner. His initial lap time was good enough to still take fifth place on the grid for the sprint race.

Russell felt concerned about the possible crash damage sustained, but explained that he was pushing to try and break into the top three on the grid.

“[I] could have been P4 for sure, I was a tenth up on my lap and absolutely went for it, because I thought there was an opportunity for third,” Russell said.

“As it turned out, probably not. But we just need to see how much damage is done. Sorry to the team and to the guys in the garage.”

Mercedes team principal Toto Wolff said on Sky Sports that Hamilton and Russell “should never beat themselves up” over crashing out, taking heart from the pace displayed through qualifying.

“Now we’re starting to come to terms and we’re able to drive in front, and then it can happen that you just lose the car.

“I’d rather have a fast car and then a qualifying like this than not having the pace to be in the top four.”