Lewis Hamilton finds it "crazy" how the feel of his Mercedes Formula 1 car swings from track to track after ending Friday's Hungarian Grand Prix practice in 11th.

Hamilton and team-mate George Russell both failed to compete with the front-runners in either FP1 or FP2 at the Hungaroring, regularly reporting struggles over the radio.

Hamilton sounded exasperated at one stage when he was informed of the gap to pacesetter Charles Leclerc of Ferrari, who ended FP1 1.1 seconds clear of the seven-time world champion.

"The car is a bit of a struggle," Hamilton said.

"It's crazy how it swings so much from track to track. Just [keeping my] head up, trying to figure out how we can get the car working at the moment.

"It's a little bit loose and not doing what we want it to do. So yeah, difficult day."

Mercedes arrived in Hungary hoping to build on its season-best result of second and third at the French Grand Prix last Sunday, beating one of the Red Bulls on outright pace and capitalising on a difficult day for both Ferraris.

Hamilton noted after qualifying in France that despite the gap to Red Bull and Ferrari, the car itself felt good - but he was less upbeat this time around about the Mercedes W13.

"Nothing has changed on the car since last week," Hamilton said. "I'm the same driver this week as I was last week. But for some reason, this track, it's not working as well.

"I think once we got it right, the gap is about the same as last week, around a second." 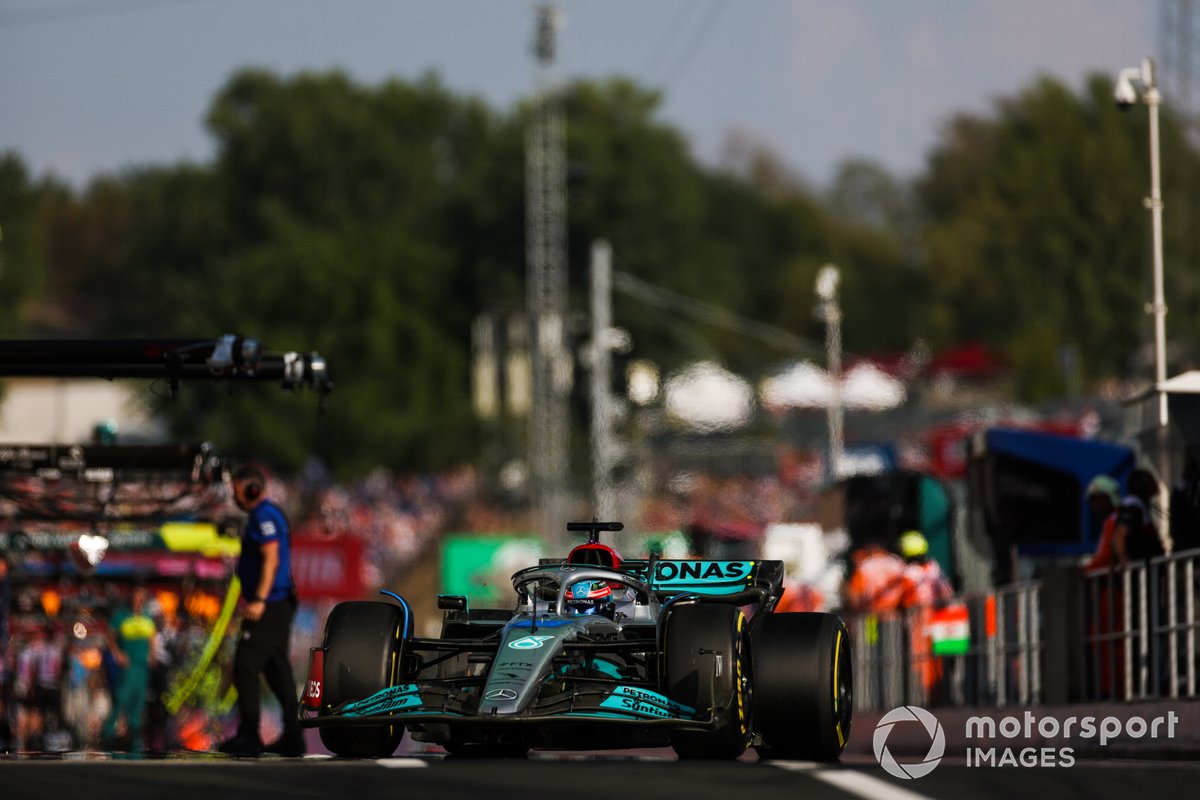 Hamilton revealed that he also sustained some damage on his floor during the session that made it "pretty tricky for the long-run pace" in FP2.

"It's going to be a tough weekend, that's for sure, but we'll give it everything and see what we've got," he added.

Although he agreed it was not a smooth day for Mercedes, Russell explained that the team experimented a bit to try and get to the bottom of its struggles given the expecting rain on Saturday.

"The conditions for Sunday are going to be drastically different, so we were trying quite a few things with the car, using it as a bit of a test session because to be honest," Russell said.

"You can try and optimise a few things for today, but there's no use of that, it's all for the rest of the weekend.

"Even though it was a very tough day, I think it's been a productive one."

Russell said the experiments were "things to lean more about the car at the expense of maximising or trying to get the most out the lap time for today", but the team was still "definitely a bit further away than we would have expected."

"But I think tomorrow is going to be a totally new day and Sunday will also be a very different day, so not all is lost yet," Russell said.

Verstappen: Red Bull can't compete with Ferrari in Hungary in the dry