Hamilton made a good start from second on the grid to pull alongside polesitter Bottas on the run down to Turn 1, and the pair ran around the first corners side-by-side.

Bottas eventually managed to get in front and went on to claim his second victory of the 2019 season, retaking the lead in the drivers' championship by one point.

Hamilton suggested he could have fought Bottas more aggressively for position, but preferred not to risk compromising Mercedes' overall result as it took a fourth straight one-two finish.

"It's very, very difficult and ultimately you always have to remember that when you're in a team as big as this, you're only one person and there are so many people who depend on us," said Hamilton.

"Selfishly, I could have pushed a lot harder and Valtteri would have lost positions and I would have gained positions.

"Most likely, he would have been overtaken by Ferrari or something like that.

"We have to work together, so while I wanted to overtake him, I have to be cautious at the same time to give him space so that we could lock the front row and we would stay there.

"Ultimately I lost out, but that's a sacrifice you have to make in order for the team to win.

"I think if it were a Ferrari there it would have been a lot different." 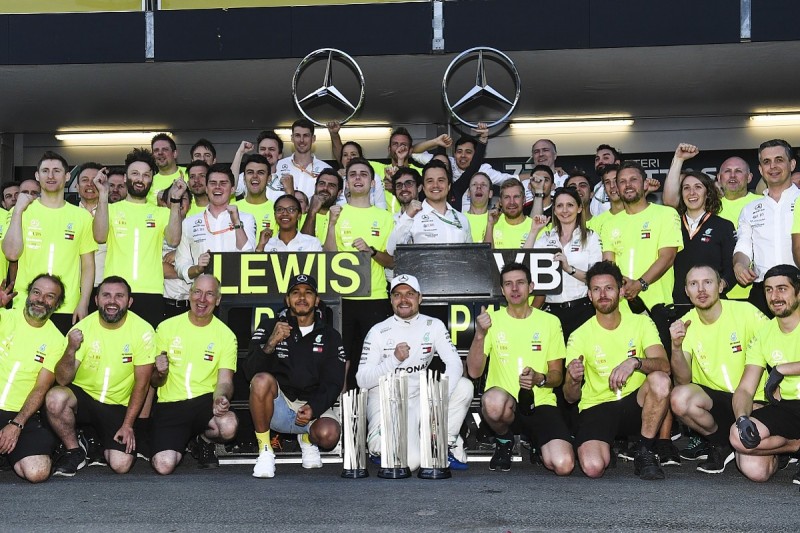 Each of the Mercedes drivers now has two victories each this season, with Bottas continuing his impressive return to form after a disappointing end to 2018.

They are over 30 points clear of nearest rival Sebastian Vettel in the championship, and Hamilton emphasised the importance of team cooperation continuing all season.

"That will be how it continues for the rest of the year," he said.

"Valtteri and I have always had a lot of respect for each other and we continue to do so and you can see that's how we deal with it.

"We discuss it before the race and we agree as gentlemen and we stick to it."