Lewis Hamilton says that Fernando Alonso’s comments about him “make me giggle a little bit” after the Spaniard questioned the value of his Formula 1 titles.

In an interview with Dutch newspaper De Telegraaf that was published last Saturday, Alonso discussed the value of F1 titles won against drivers from other teams compared to those fought only against a team-mate.

Alonso took to Twitter after the quotes began to circulate to say that “all titles are amazing” and he was “tired of the continuous search for headlines”, as well as suggesting F1 fans should stop being pitted against each other on social media.

But in an apparent response to Alonso’s comments, Hamilton tweeted a picture of them on the podium together at Indianapolis in 2007 when they were team-mates at McLaren, accompanied with a single thumbs up emoji.

Hamilton won that race ahead of Alonso, who was left fuming at his McLaren team amid a tense season that resulted in Alonso leaving at the end of the year.

Asked for his reaction to Alonso’s comments and about the post, Hamilton said: “I gave you [my reaction]. That’s my thumbs up.

“I don't really have a lot to say about it. It does make me giggle a little bit to be honest, but I have tried to be really respectful over the years.

“For example, when you've ever asked me about who has been the better driver for me, I’ve always tried to give praise. 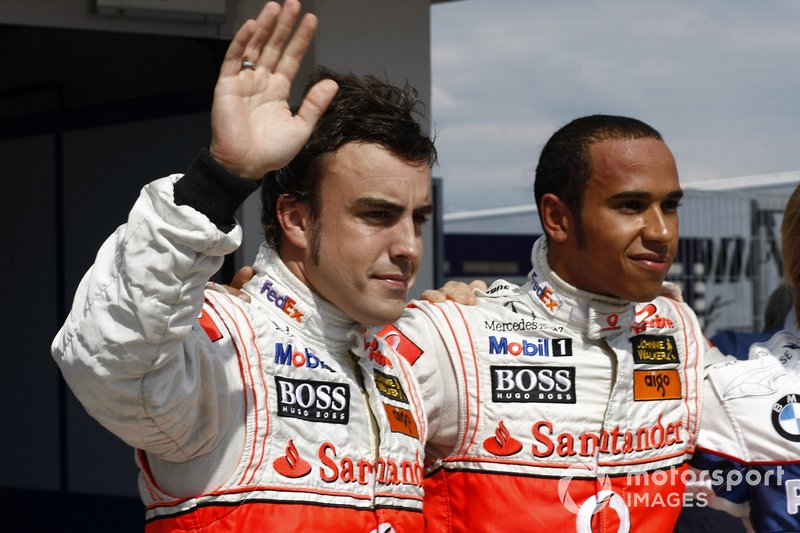 “It's definitely interesting to see the comments that are made, but it doesn't really matter. So that's why I just kind of put the thumbs up.”

Mercedes F1 boss Toto Wolff also brushed off Alonso’s comments, saying the two-time world champion was “a teaser” and it was “comedy”, and that he doubted Hamilton cared.

“It creates headlines, and this sport is about headlines,” said Wolff.

In the wake of the response to his comments, Alonso said on Sunday when asked about Max Verstappen’s new win record that he would not “speak any more about anyone else, because I think there’s always misunderstanding.”

It was not the first time there had been some tension emerging from comments Alonso made about Hamilton this year.

Following their collision on the opening lap of the Belgian Grand Prix in August, Alonso called Hamilton an “idiot” over team radio and claimed the seven-time world champion could only “race starting first.” He later apologised for the comment.