Lewis Hamilton has concerns about his back ahead of the Formula 1 Azerbaijan Grand Prix, and admits the issue also compromised his preparations for the race.

Hamilton and Mercedes team-mate George Russell have experienced excessive porpoising and bottoming at the Baku street track, with the latter especially complaining it has affected his visibility for the cockpit at the end of the straight.

Hamilton acknowledged that he wasn't able to complete a planned long run on Friday, which meant that the team didn't get all the data it wanted.

He also noted that after overnight changes on the car on Saturday the porpoising had moved from the end of the main straight to the fast kinks at the beginning of it.

"Honestly, we had so much bottoming at the end of the straight yesterday that I couldn't finish my long run, my back was a real mess," Hamilton said, having qualified seventh,  two places behind Russell.

"Thank God for Angela [Cullen]. I've got Angela to give me physio every night, and acupuncture. I woke up with quite a bit of pain this morning.

"And now we don't have it as bad at the end of the straight, but it's through those corners. You're just trying to keep it out of the wall. So with heavy fuel hopefully it will be less tomorrow, but we are very slow on the straight.

"So I'm sure part of that is the bottoming, because it slows you down every time you touch the ground. But the others also have like a Monza wing I think here, so we have a lot of work to do." 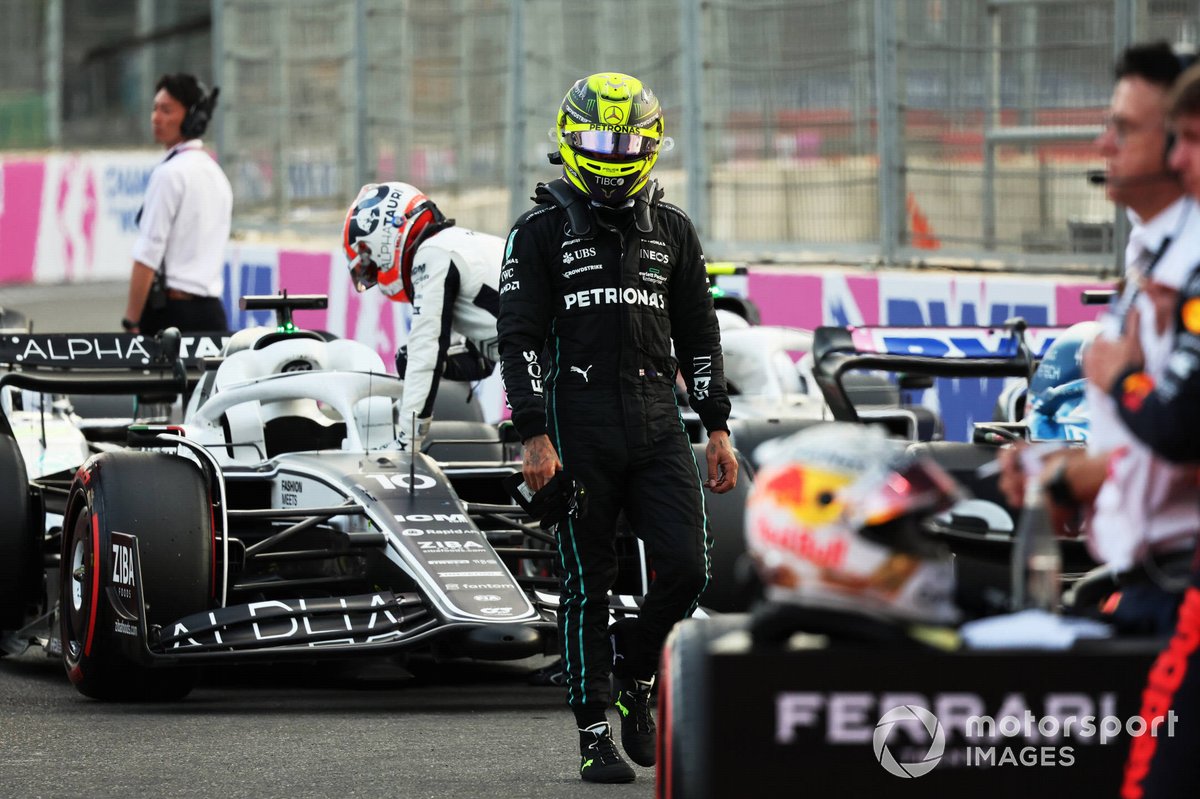 Hamilton indicated that just staying on the track was an even bigger concern than visibility.

"The visibility has been the same for us all year," he noted. "So definitely tough. For me, it was just keeping the thing out of the wall on the fast, high speed curves, but nothing we seem to do, like we changed so many different things, we just can't seem to [fix it].

"It's crazy, because in Barcelona, we didn't have any, and then everywhere else, we've had it. So it's a phenomenon that we just can't get our heads around."

Hamilton agreed with the push from some drivers for the FIA to look into ways of reducing porpoising, which was discussed in Friday evening's briefing.

"I think it can be a safety issue, as I said, like today it's bottoming through corners where you're doing 180 miles an hour, big, big bottoming, and there's not really a lot that we can do to stop it.

"And we can't have this for four years of this car. So I think that they do need to work on it, which I think all the drivers spoke about."

Hamilton insisted that his team is still working hard on the issue.

"I miss already Barcelona, just driving down the straight and there's no problem," he said. "When I go and talk to some of the other drivers like Valtteri [Bottas], have you got any bouncing? No. Wow. Can you imagine how nice that will be? We'll get there eventually.

"I mean, it is what it is, we accept the reality with which we're presented. There's nothing I can do. And literally I was here to 1.30am last night, all the mechanics and all the engineers had left obviously [due to the curfew]. I'm here studying, I'm doing everything I can, I'm working with the guys back at the factory.

"I was at the factory two days on the sim, I'm giving everything I can, there's not much more I can do. Today I lost over a tenth just on the straight line just because of the bottoming compared to George. So yeah, it is what it is. We keep working."