OPINION: Even in Kevin Magnussen’s wildest dreams, he never expected to take pole position for Haas at the Formula 1 Brazilian Grand Prix - he even said so himself. But exactly that scenario played out at Interlagos and offered a reminder of the wonders of a minnow beating the giants fair and square

With both championships long settled and the end of an intense season to date within sight, Brazil was hardly being hyped up as being a big weekend for Formula 1.

In fact, in the lead-up to the start of qualifying, I was discussing with some friends how this season feels like it has dragged on, particularly since Max Verstappen clinched his second title and made the remaining rounds dead rubbers. Negative? Yes. But mentally, many within F1 are already thinking of the winter break that is less than two weeks away.

But then along came Kevin Magnussen and Haas to remind us of the magic that F1 can conjure up when you least expect it, and why underdogs in both the series and in wider sport matter so, so much.

Interlagos has a funny habit of throwing up shock results like this. Think of Giancarlo Fisichella’s victory amid the chaos of 2003, Nico Hulkenberg sticking his Williams on pole in the damp as a rookie in 2010, or Pierre Gasly’s redemptive podium in 2019. All three were proper feel-good results - and now we have another to add to the collection.

Magnussen had looked punchy through the first two stages of qualifying en route to Q3. He even noted the small gaps to the frontrunners while sat waiting for the session to begin. “I was looking at the times after Q2, and thinking maybe this could be my smallest margin to pole position in my career,” he said after the session. “And I was right!”

The stars naturally had to align for Magnussen - getting to the head of the queue; Max Verstappen making his mistake; George Russell going off when he did and the red flag coming out - but what followed was a little over 10 minutes of F1 theatre that will live long in the memory. 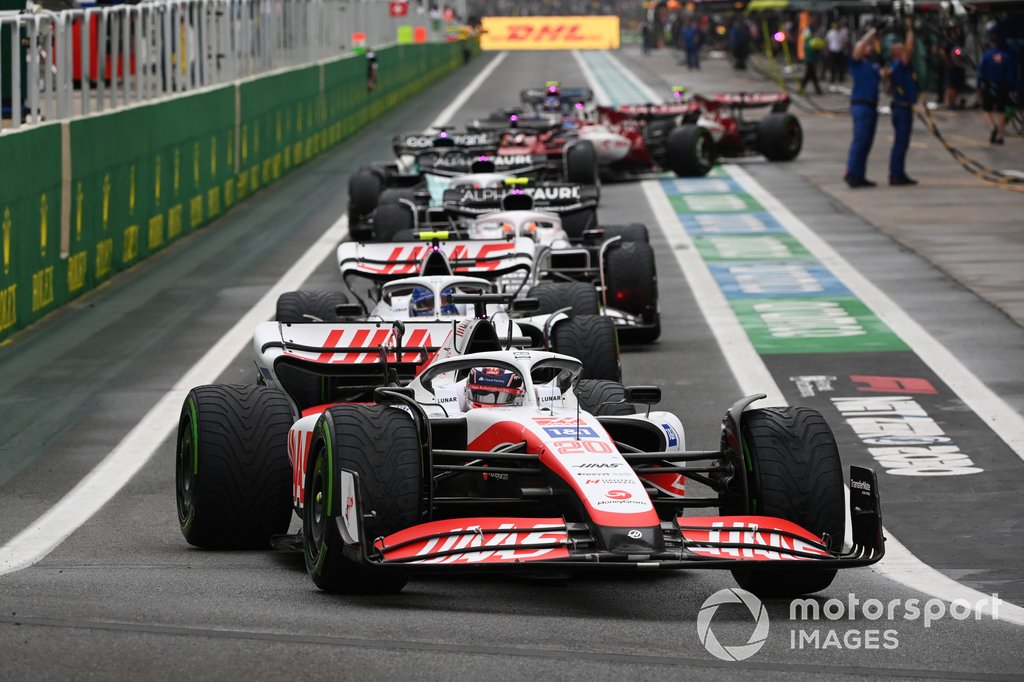 “You’re kidding…” came Magnussen’s reply when he was told that he was P1 while circulating back to the pits under the red flag, the realisation of what might be about to happen kicking in. “I’ve never, ever felt like this in my life guys.” He was quick to warn: “Don’t celebrate yet!” There was still time on the clock, and the rain was yet to fully arrive.

“It just felt scary, because there was still time left, eight minutes,” Magnussen explained after the session. “I couldn’t really see how much it had been raining when I got back in the garage. If the session restarts, is the track going to be good enough for people to improve? Because we know we’re not the fastest car.

“I just didn’t want to jinx it. I was superstitious in the car, thinking I couldn’t celebrate until it’s there.”

And so came the wait. The session went back to green with eight minutes left on the clock, the sky darkening and the tension building in the Haas garage. Barring something unfathomable, pole would surely belong to Magnussen. But the team members could only look nervously at the screens, while Magnussen remained sat in the cockpit in case he had to go out again.

Only nine months ago, it had to deal with the fallout of Russia’s invasion of Ukraine, Uralkali’s links to Putin and what that meant for its future, only to turn then to the past by bringing Magnussen back - and now it has a pole position

An exploratory lap by Sergio Perez on intermediates realistically put the writing on the wall for any chance of beating the pole time. Magnussen pulled a funny face for the TV camera in his garage and began to bob his head around, but still there was no huge celebration.

That came with two minutes to go when, at last, there wasn’t time for anyone else to get a lap in. The Haas crew broke into wild celebrations, limbs everywhere, a couple reaching to Magnussen’s car to lift off his headrest and help him out of the car. He was an F1 polesitter.

More: The other members of the one-off F1 pole club

Magnussen punched the air furiously, the kind of celebration that we see so often in parc ferme, making it odd to watch it unfold within the cramped Haas garage, lights and screens around him. But if anything, it made it more personal; more fitting for what Haas has achieved. 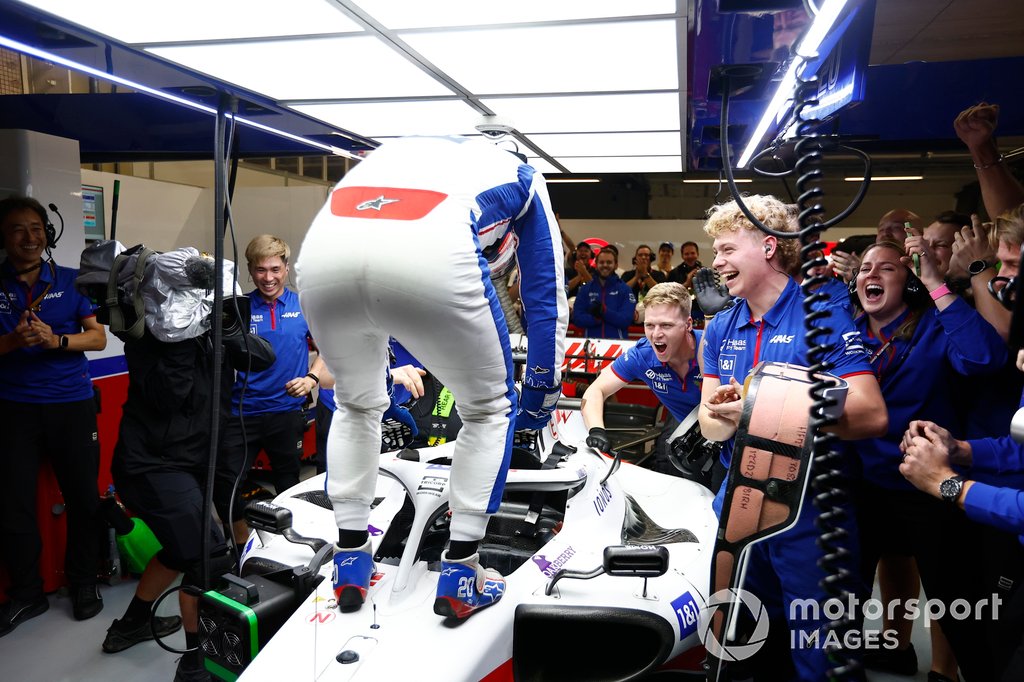 This is a small team that has fought to be part of the establishment since joining the grid in 2016, proving that it is possible to join the grid and make it work successfully. It has dealt with uncertainty and unstable title sponsors, handled team-mate clashes that left doors getting ‘foksmashed’, to borrow a term now part of F1’s lexicon coined by Gunther Steiner in Drive to Survive, and breaking its status as the new kid on the block.

Only nine months ago, it had to deal with the fallout of Russia’s invasion of Ukraine, Uralkali’s links to the country's president Vladimir Putin and what that meant for its future, only to turn then to the past by bringing Magnussen back - and now it has a pole position.

The rule change for this year might have brought F1’s midfield closer together, but of the 60 podium finishes available in the first 20 races, 59 of them have gone to one of the ‘big three’ teams, the exception being Lando Norris’s third-place finish at Imola.

PLUS: The 2022 rule change result that should worry F1

We know the overhaul of the technical regulations combined with the budget cap properly kicking in means it will take time for things to even out, giving more chance to the smaller operations to compete. But this year has still largely felt like a lockout for the rest of the field, lacking the shocks provided by Esteban Ocon in Hungary or Pierre Gasly at Monza in the last two years.

Friday went some way to changing that. It may not be a race win, and Magnussen may not even start up the order for Sunday’s race given the sprint weekend format. But it is still a wonderful reminder of why the underdogs in F1 matter so much, giving the series the kind of heart and shock we so often take for granted.

To borrow another Steiner-ism: Haas looked like a bunch of f****** legends on Friday. What a lovely way to shake off any late-season lethargy and get us excited for the rest of the Interlagos weekend. 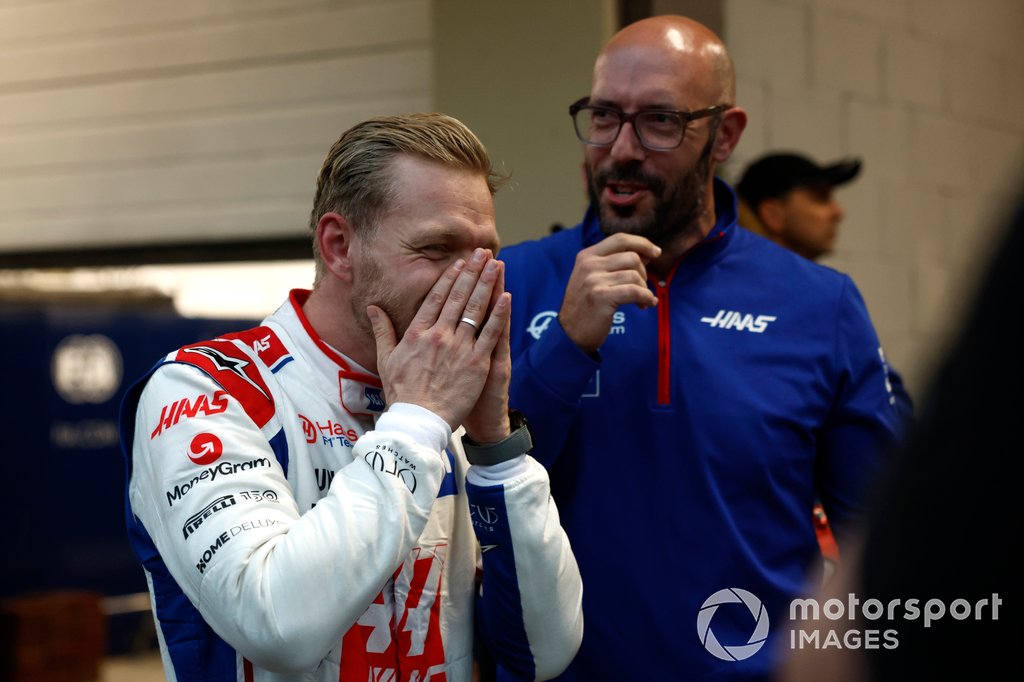 Magnussen couldn't hide his emotions at his maiden F1 pole