Grosjean spun at 170mph and had a 17G impact with the barriers in Friday practice after his right rear tyre was destroyed when he ran over a drain cover that had been dislodged by Valtteri Bottas's Mercedes at Turn 13.

Grosjean, who walked away uninjured, called for action to make sure incidents like that do not happen again while Haas team principal Gunther Steiner said it was "unacceptable" and "not up to the standards" required for F1 tracks.

The FIA believes a welding failure led to the drain becoming dislodged, with circuit engineers forced to look at every drain that did not have bolts in and strengthen them ahead of final practice.

Steiner met with Sepang International Circuit chief executive Dato' Razlan Razali on Sunday morning ahead of the race to discuss the incident and request compensation for the damage, which was significant.

The floor and front wing, which was brand new, were damaged beyond repair, with the total damage estimated at around £500,000. 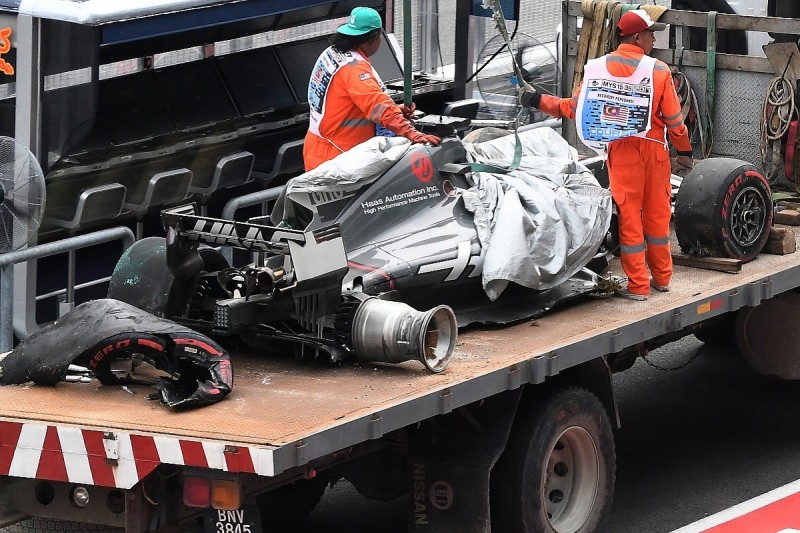 Speaking about the incident, Steiner said: "It was completely out of our hands.

"I cannot say - 'oh, OK, we now let, let's say, three quarters of a million [dollars] go because somebody forgot to weld something in, it's all good'.

"We discussed it and they were very professional about it.

"They have insurance, let's see what we can do."

Circuit officials are discussing the situation internally and further talks with Haas are expected to take place this week, ahead of the Japanese GP.