Vettel used soft rubber to knock team-mate Charles Leclerc off top spot by a quarter of a second with 20 minutes remaining, setting a time of 1m14.013s.

Leclerc had used the same rubber to relegate Lewis Hamilton to third place, with the Mercedes drivers using medium tyres to set their best times after spending the first part of the session on softs.

Hamilton, who was three-tenths off the pace but had lagged behind Bottas when on soft rubber, lapped almost three and a half tenths quicker than his team-mate on mediums.

Bottas ended his session with an off into the gravel at Turn 12 after a lock-up with two minutes remaining, but was able to dig himself out and return to the pits - scattering gravel on the track as he rejoined.

Pierre Gasly struggled early on with vibration issues, but was able to climb to sixth using soft rubber in the final half-hour.

McLaren driver Carlos Sainz Jr, who spent the early stages of the session fastest when on hard rubber, climbed back to seventh just before the half-hour mark when he bolted on softs.

That put him 0.012s ahead of Haas driver Romain Grosjean, who set his time moments before Sainz.

Grosjean is running the specification of Haas that was used in the season-opening Australian Grand Prix, continuing the back-to-back experiment the team started at the last race at Silverstone with Kevin Magnussen now running the latest, upgraded, version.

Lance Stroll, in the heavily upgraded Racing Point, was ninth having concentrated on using medium Pirellis, comfortably ahead of the lead Renault of Daniel Ricciardo, who set his time on softs.

Ricciardo had a spin late in the session at Turn 1, but was able to recover.

Sergio Perez was 11th fastest in the second Racing Point, also using mediums, and just ahead of the second McLaren of Lando Norris. 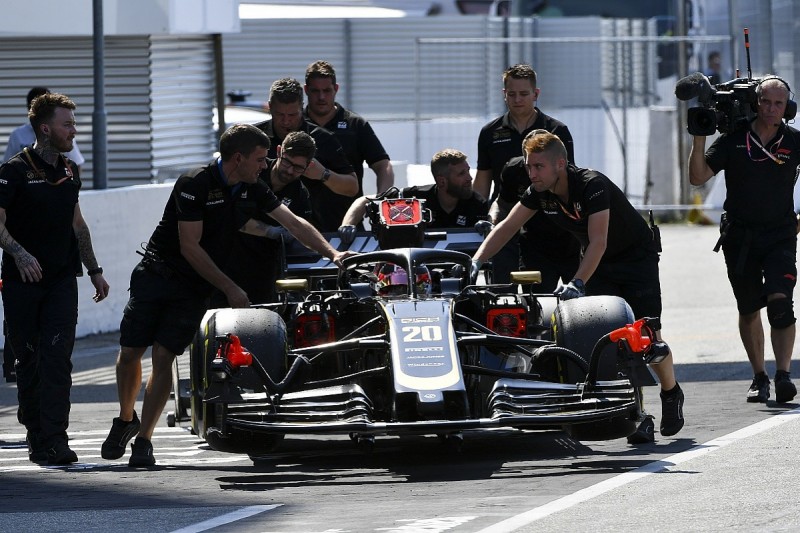 Magnussen was 13th after returning to the track shortly after causing an eight-minute red flag early on when he stopped in the stadium section.

The issue was revealed to be a sensor problem - he reported over the radio that, "I have some sort of alarm and no power" - so after being towed back to the pits he was ready to go again.

Toro Rosso driver Daniil Kvyat set the 14th-fastest time ahead of team-mate Alex Albon - who switched halos during the session, having initially run a more basic version before returning to the usual spec fitted with an aero faring.

Nico Hulkenberg was 16th in the second Renault ahead of Alfa Romeo duo Kimi Raikkonen and Antonio Giovinazzi.