Formula 1 should embrace its new sound rather than artificially change to appease disgruntled fans, according to Force India deputy team principal Bob Fernley

F1 has faced criticism for the quieter sound produced by the new 1.6-litre turbo engines this season, compared to the normally-aspirated V8s used until the end of last year.

Mercedes is due to trial exhaust tweaks during post-Spanish Grand Prix testing at Barcelona tomorrow so the FIA can assess whether changes should be mandated to increase the noise levels.

But Fernley, whose Force India team takes a supply of customer engines from Mercedes, reckons the sport would be better served by promoting the current technology as it stands.

When asked about tweaking the exhausts, Fernley told AUTOSPORT: "It's not something I favour.

"I don't think we need to artificially change what we're doing.

"The engine manufacturers have done a wonderful job and we're putting on a hell of a show.

Fernley reckons fans will slowly get used to the new sound of F1, just as those within the paddock have done across the first five races.

"What you'll identify is this different sound of being the most advanced technology," Fernley added.

"Even for us that are seasoned in the paddock, you think now when you see a GP2 car: 'noisy little thing!'.

"It's that strange thing after a few races we've become accustomed to this incredible efficiency and the V8s sound old.

"We don't need to address the sound artificially.

"We're in a different world and I think we have to embrace that world, not try to stay in the past." 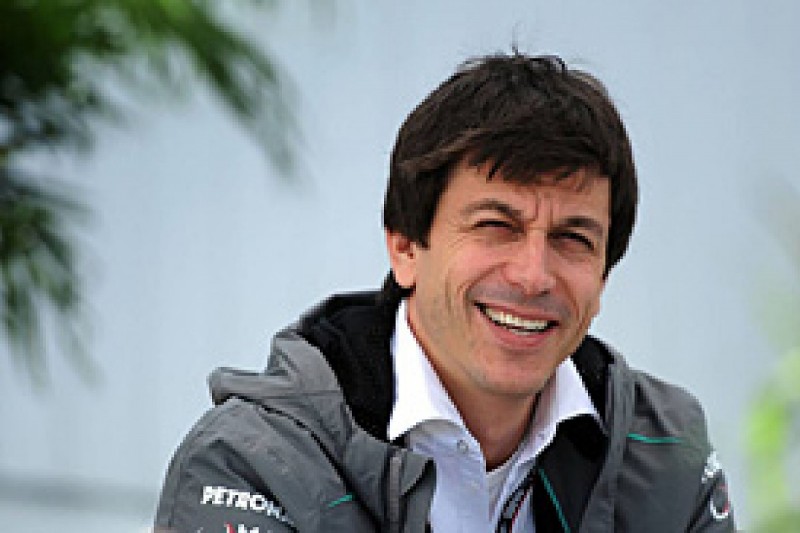 "Traditionally you would say Formula 1 needs to be loud to be spectacular," Wolff said.

"If you had a vote, maybe 60 per cent would be for noisy Formula 1 cars and the other 40 for new technology.

"Honestly, I don't know where it's going. I think we need to test it.

"We're not talking about a loudspeaker on the back of the car. It's a change to the exhaust, which you see in road cars.

"We'll see if it's more spectacular and how we perceive that."

However, Wolff conceded there were benefits to the quieter notes of the new engines and that maybe perceptions would simply change over time.

"Why are we making loud AMG [road] cars? Because they sound spectacular, and it somehow means power, [but] maybe that's changing," Wolff added.

"I had a discussion with a race insider the other day, looking at GP3, and it is much louder than Formula 1.

"Is that actually what we want to happen? He said: 'Yeah, I couldn't take my family to Formula 1 before, now I can'.

"Maybe the future is going to be the most powerful cars not being the noisiest ones."
shares
comments