Formula 1 teams are pushing to make grand prix cars more visually spectacular, AUTOSPORT can reveal, with the return of sparks, glowing brake discs and vapour trails all being considered

Leading F1 outfits have grown concerned that recent design trends have robbed the sport of the drama that previous generations of cars provided.

The teams involved in the Strategy Group now plan talks over the next few weeks to consider a range of proposals that can bring some of that excitement back.

The discussions form part of a wide-ranging review document that has been prepared by F1's Strategy Group that maps out an improvement plan for the sport.

The ideas are dominated by much-needed cost-cutting measures, but it also features proposals that are aimed simply at making F1 cars more thrilling to watch.

The teams believe that changes to the car designs that will reduce costs could have benefits beyond making them cheaper.

So a shift away from the current complicated brake ducts - that are being used more and more for aerodynamic benefit - will also make sure the concepts bring back the visual impact of glowing brake discs.

Furthermore, the discussions about active suspension have also prompted debate over whether the system's return can help create a way of making cars spark once again - just as they did up until the early 1990s.

The spectacular sparks, which were caused by titanium plates rubbing on the ground, became non-existent when underfloor planks were introduced during 1994 to stop teams running their cars too close to the ground for aerodynamic benefit. 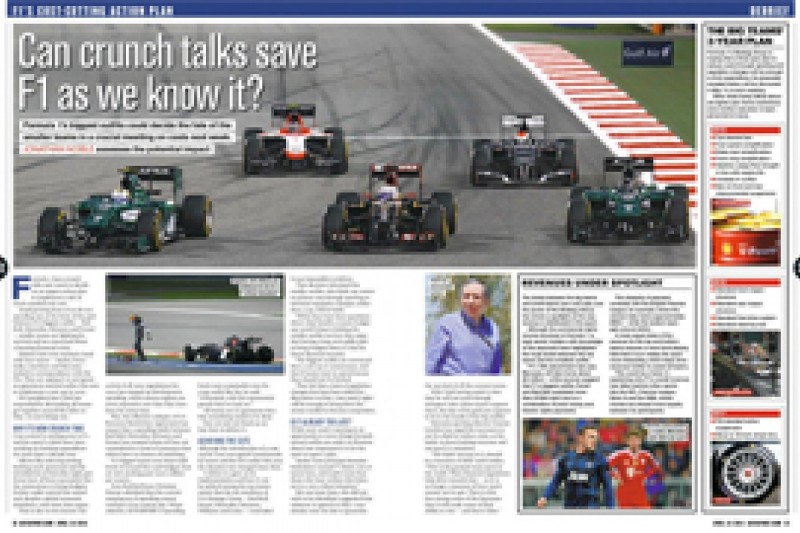 As well as potential aerodynamic tweaks to create vapour trails, other more wide-sweeping changes to the sport are also up for discussion.

They include standing starts after safety cars, a potential reduction in race length, and the green light for higher technology to be used in pitstops to cut the time even further.

The proposals will be evaluated by the Strategy Group over the next few weeks, with any agreement on changes for the future needing to be approved by the F1 Commission and then the FIA World Motor Sport Council.