The Mexican was second fastest in qualifying and though he started seventh after a gearbox penalty, he fought back up to finish third.

It was Force India's second podium in three races and the first time the outfit had scored more than one podium in a single season since its formation in 2008.

"It looked a bit tough after Saturday but we came through and it's nice to be able to do it on performance - on merit," Fernley told Autosport.

"Nobody gave us anything and we fought hard on it.

"It's a testament to the guys that have done good things with the car.

"Sometimes you have to wait for opportunities to come along.

"But when you're getting podiums on merit, that's a whole different ball game.

"Checo drove well and a second podium in three races shows that he is getting the potential out of the car."

Fernley said the team has been strong from the start of the season, but suffered misfortune early on before turning things around when it introduced a big update in Spain.

"Right from the beginning we've had the right package," said Fernley, whose team closed to 31 points of fourth-placed Williams in the constructors' championship.

"For the first four races we struggled to get it going in our favour, but since Barcelona we've been pretty on it.

"Some [tracks] will suit us better, others we'll have to be patient, but at those it will be all about maximising points.

"And I feel other races will give us podium opportunities again."

In a famously topsy-turvy period when whichever team got its set-up right on the day had a podium shot, the low-drag Force India thrived at Spa and Fisichella took pole in a straight fight before the lack of KERS led to defeat by Kimi Raikkonen's Ferrari.

Verdict: On merit on the day - but totally out of the blue

While all eyes were on Lewis Hamilton and Nico Rosberg's spectacular lead battle, Perez defeated team-mate Nico Hulkenberg, Red Bull, Williams and Ferrari in an equally tough 'best of the rest' tussle.

Verdict: On merit, beat everyone bar Mercedes on pure pace

A well-timed pitstop and long stint moved Perez into third, and though Valtteri Bottas and Raikkonen overtook him on the final lap they collided immediately afterwards.

Verdict: Down to strategy then the shunt ahead

Switching to slicks on a drying track at the right moment vaulted Perez from seventh to third and he stayed there. 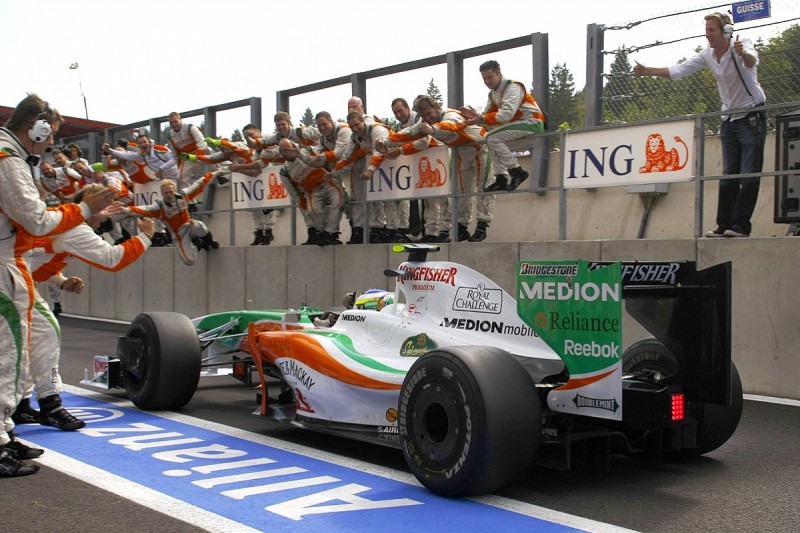 Baku one of Mercedes' best F1 tracks since 2014 - Toto Wolff