Renault driver Hulkenberg moved ahead of Force India's Sergio Perez for seventh on the first lap when he ran off track at the Turns 11-12-13 chicane at Yas Marina as they battled.

The stewards handed Hulkenberg a five-second time penalty to serve at his pitstop, but that gave him enough time to build a gap over Perez, allowing him to stay ahead after taking the penalty and ultimately finish sixth.

"It was a very lenient decision to be able to do that," Force India deputy team principal Bob Fernley told Autosport.

"It should have been a case of reversing the position immediately.

"The five-second penalty meant there was no disadvantage to him.

"The gain was massive, if you looked at where he went off the track, he may as well have gone shopping in Dubai and come back again.

"It's not a good precedent. It's a weak decision."

When asked if he would talk to F1 race director Charlie Whiting about it, Fernley said: "No. It's done, you can't undo it.

"Let's move on but I think it's worrying for the future." 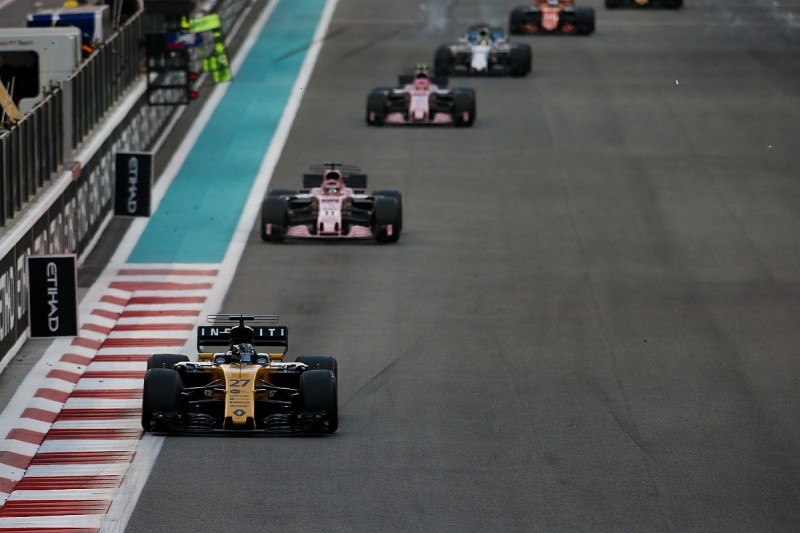 Perez complained several times on the radio that Hulkenberg should have had to give the position back immediately.

"It was a deliberate ploy by him," he said. "He knew exactly what he was doing.

"In order to overtake, he had to cut the chicane, because there was no way he would get past going down the straight.

"He knew if he stayed ahead, he would only get a five-second penalty. The regulation is completely flawed.

"The incentive now is to cut the corner, get ahead of the guy, and then go off into the distance and then serve your penalty. it's just wrong.

"There was no penalising of the driver. He was rewarded for doing it. It's just rubbish."