Hulkenberg's Renault moved ahead of the Force India of Sergio Perez on the opening lap when he went off track at the Turns 11-12-13 chicane, and he was handed a five-second penalty that he had to serve at his pitstop.

That gave the Renault driver enough time to build a gap over Perez, meaning he stayed ahead of the Mexican after serving the penalty and finished sixth, moving Renault up a place in the constructors' championship in the process.

Perez complained several times on the radio that Hulkenberg should have had to give the position back immediately, and his team agreed that the penalty was not harsh enough.

"Hulkenberg should have given the place back, just like he did when he did the same thing to [Romain] Grosjean [later in the race]," Force India chief operating officer Otmar Szafnauer told Sky Sports.

"It makes a mockery of this sport to have it so inconsistent.

"It's a track position race here, we knew they [Renault] were a bit quicker than us at the beginning on the ultra-soft, which is why we needed to get ahead and stay ahead.

"Hulkenberg cuts a corner, the FIA didn't do anything about it, and guess what? They gain a position in the constructors' championship, which means more money and more competitiveness next year.

"I don't know what [the stewards] were thinking, it's really difficult when it's all over the place, to understand. The inconsistency is not great."

Renault felt the penalty was fair, with Hulkenberg believing that if anything, he was forced to go off track. 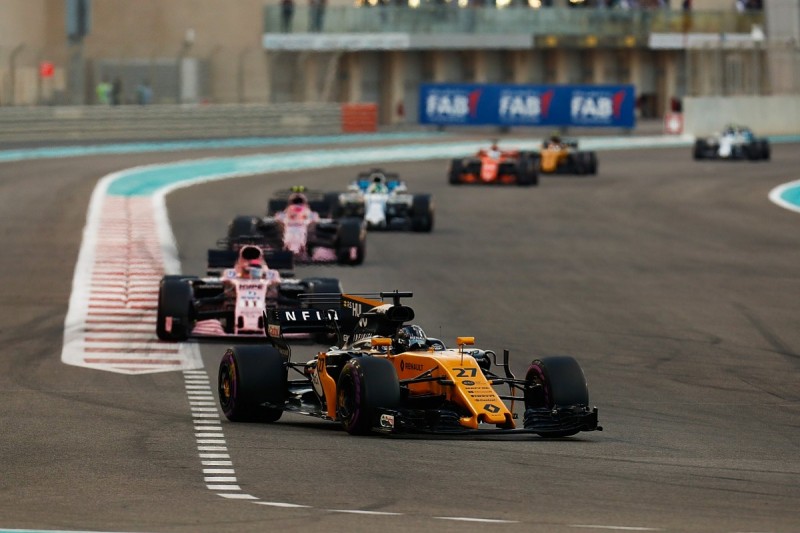 "It's always different car, different perspective," Hulkenberg told TV crews after the race. "From where I was sitting, I could see he was locking up and running wide.

"I had the car stopped and was ready to make the corner but he was running wide, so I had no place to go.

"It's not that easy to say I can stop that much more and tuck in behind him.

"I had nowhere to go, and that is also a bit forcing another guy off the track, in my opinion.

"In the circumstances, I think the five-second time penalty was fair and reasonable."

Renault team boss Cyril Abiteboul said Renault "did what it takes to build the gap so that the penalty would be harmless", while Perez felt the choice of penalty from the stewards was wrong.

"It was a bit of a strange penalty," Perez told NBC. "I was ahead of him and he just left the track and gained an advantage.

"That's quite good when you have more pace than the other car, to cut the track and gain an advantage.

"I don't think the penalty was good - he should have given back the position."