The FIA has issued a technical directive to allow it to measure fuel pressure throughout each car's fuel system, AUTOSPORT can reveal

The directive, issued on Sunday, calls for teams to measure the pressure at multiple points in the fuel system.

The FIA has asked for these systems to be implemented by the Chinese Grand Prix in April at the latest.

But it has also requested that teams do so earlier if possible, with each team set to be contacted by the FIA to evaluate how the fuel pressure will be measured and how these systems will fit in with the standard ECU.

This will allow the FIA to monitor the fuel flow through the system in more depth rather than relying purely on the single FIA-homologated fuel-flow sensor that all cars must carry in their fuel tank.

This could potentially allow closer monitoring of technical regulation 5.10.5, which states that "any device, system or procedure the purpose and/or effect of which is to increase the flow rate after the measurement point is prohibited".

This technical directive demands that fuel pressure is measured at various points in the fuel system from the tank to the injectors.

Currently, the system has a pump in the fuel tank, which pumps fuel via the fuel flow sensor up to the high-pressure direct injection pump on the cylinder heads.

In theory, with the fuel-flow sensor, it should not be possible to have fuel flowing into the engine at a rate greater than that measured by the fuel flow sensor.

But as the fuel flow sensor is in the fuel tank, there is some distance between it and the fuel injectors, as indicated in the diagram below.

There, you could potentially accumulate fuel during periods of low demand from the engine.

This could subsequently be pumped into the engine at a greater pressure and/or fuel-flow rate than stipulated by the regulations.

This greater fuel flow would increase engine power, which is currently restricted by fuel-flow regulations.

By measuring the fuel at these different points in the system, it should be possible to prevent any abuse of the regulations.

The below illustration shows the layout of the fuel system of a generic F1 engine. 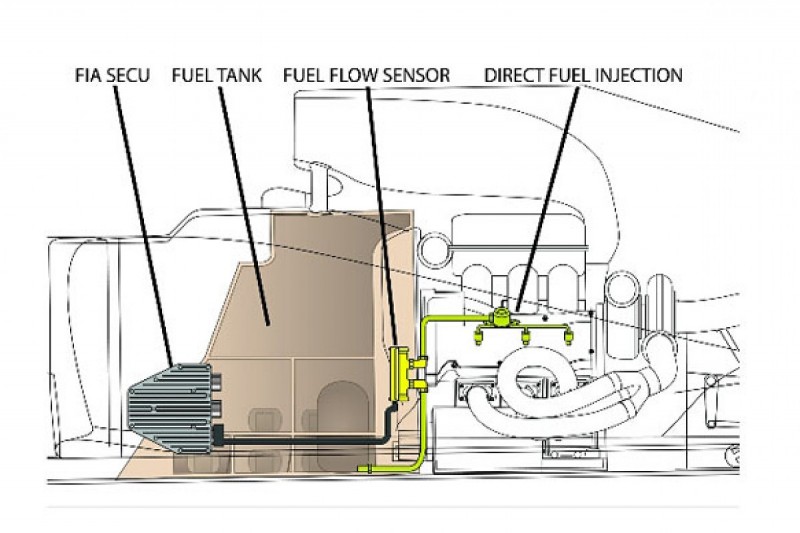 Valtteri Bottas ruled out of Australian GP on medical grounds