Kimi Raikkonen says the visibility of Formula 1's proposed halo head protection system "was OK" according to Ferrari, after becoming the first driver to try it during pre-season testing

Raikkonen turned his installation lap on Thursday morning with the device fitted to his Ferrari SF16-H.

The team was keen to get a driver's opinion on how the device impacts on their vision.

"[The] first impression on the visibility test is positive," Raikkonen said, through the FIA.

"The structure does not hamper [visibility]."

Ferrari says the design is an early prototype that it produced itself, based on its own interpretation and is "pretty close" to what it expects the final shape to be.

As it was only a temporary fix, designed and produced mainly to gauge a driver's opinion regarding visibility, it did not have a hinge that would allow for easier extraction.

As a result, it complicated how Raikkonen climbed inside the cockpit when it was attached.

The Scuderia has yet to decide whether Sebastian Vettel will run it on the car when the German completes the final day of testing for the team on Friday.

Over a period of time the FIA has conducted considerable research and tests into the product, with the halo emerging as the best of three reviewed designs.

The primary test focused on a wheel being projected at the halo device with significant force.

Assessing the results, Andy Mellor, the FIA's lead researcher for the Global Institute for Road Safety on this project, said: "It's very impressive that although the structure is positioned close to the driver's helmet to provide protection from all angles, it is still able to prevent the wheel from contacting the helmet.

"In the very short distance available a huge amount of energy is absorbed and the wheel is successfully redirected."

The FIA prototype was made out of steel, while Ferrari's is made of carbon fibre.

The key concern, however, is - and remains - visibility.

Speaking in the FIA's monthly magazine Auto, Mellor added: "We need to avoid creating any blindspots as that would introduce an unacceptable additional risk during racing.

"We are looking to achieve a structure that provides a full panorama of forward and sideways binocular vision, allowing only very small areas of monocular vision restricted by the structure." 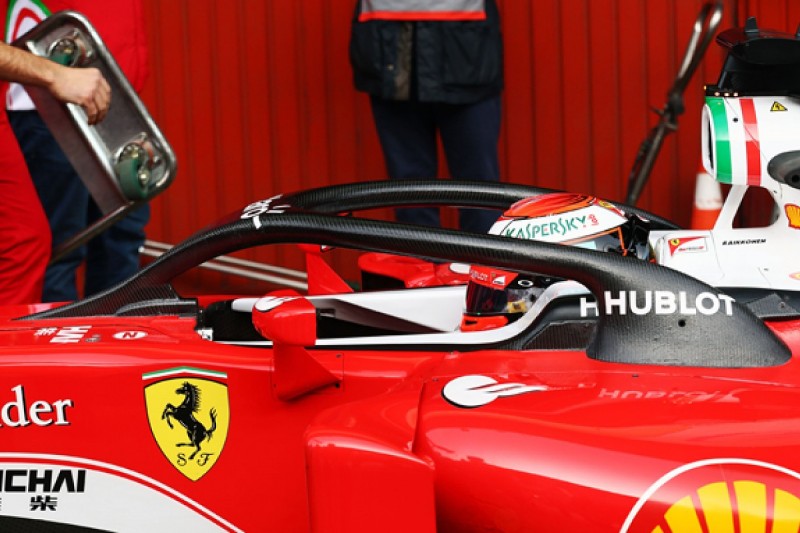