Kimi Raikkonen set the pace on day one of the post-Abu Dhabi Grand Prix Pirelli Formula 1 tyre test, as Robert Kubica completed his first run in a 2017 Williams

The Ferrari driver clocked a 1m37.768s on the new-for-2018 hyper-soft tyre to finish 0.298 seconds clear of Red Bull's Daniel Ricciardo, who hands over to Max Verstappen on Wednesday.

Raikkonen, who recorded 99 laps, is splitting driving duties with Sebastian Vettel at the test, with the German to take over for the final day on Wednesday.

All of the current race drivers will get at least some running on the 2018 tyres as they are keen to get some mileage on Pirelli's new range, which will be softer next season.

Romain Grosjean was fourth for Haas ahead of Fernando Alonso, who crashed during the morning session, damaging the front wing of his McLaren and bringing out a red flag. 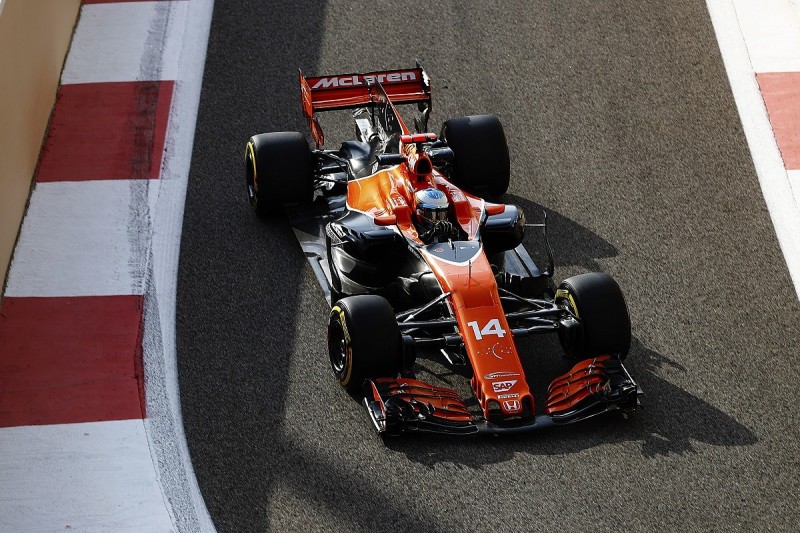 The Spaniard got back out again and ended the day with 111 laps on the board.

Renault's Nico Hulkenberg was sixth, with a tally of 80 laps, ahead of Force India development driver Nikita Mazepin.

Kubica amassed 100 laps in an incident-free session, with a best lap of 1m41.296s to end up ninth quickest.

He finished 1.2s adrift of Lance Stroll, who took over running for the final couple of hours, but the two were believed to be running different programmes.

The Pole will be back in the car for the final couple of hours on Wednesday, with the focus expected to be on performance runs.

Williams is using the test to evaluate whether or not to sign Kubica for next season, alongside Stroll.

Kubica is understood to be favourite for the seat.

Sean Gelael was 10th fastest in the Toro Rosso, ahead of Sauber's Marcus Ericsson, with Oliver Turvey 11th for McLaren.

McLaren was permitted to run two cars to make up for the loss of running when the recent Pirelli test at Interlagos was cancelled because of security concerns.

All of the day's fastest times were set on the hyper-soft tyre except for Kubica's lap, which was completed on the soft tyre.

Hamilton: Hyper-soft is best tyre Pirelli has made since F1 return