Ferrari has explained why it opted to put Charles Leclerc on hard tyres during Sunday's Formula 1 Hungarian Grand Prix, sparking his fall from fighting for victory to finishing sixth.

Leclerc started on medium compound tyres at the Hungaroring and spent the opening stint running third, only to jump team-mate Carlos Sainz for second place by getting the overcut at the first round of pitstops.

With a five-lap tyre delta, Leclerc managed to catch race leader George Russell and pass him for the lead before opening up a three-second gap at the head of the field.

But when Ferrari brought Leclerc into the pits at the end of lap 39, the team decided to fit hard tyres that struggled to get up to temperature in the cold conditions.

It led to Leclerc quickly being overtaken by title rival Max Verstappen, who had started 10th, before losing more and more time as the stint wore on. He was eventually brought in just 15 laps later for a third stop before ultimately finishing sixth.

Ferrari F1 boss Mattia Binotto revealed the team's simulations said that while the hards would be tricky to get up to temperature early on, they were predicted to be the better tyre for the final stint.

"When we fitted the hard, our simulation was that it could have been a difficult couple of laps of warm-up," Binotto explained.

"It would have been slower to the medium for 10-11 laps, and then it would have come back and been faster than the end of the stint, and it was a 30-lap stint. 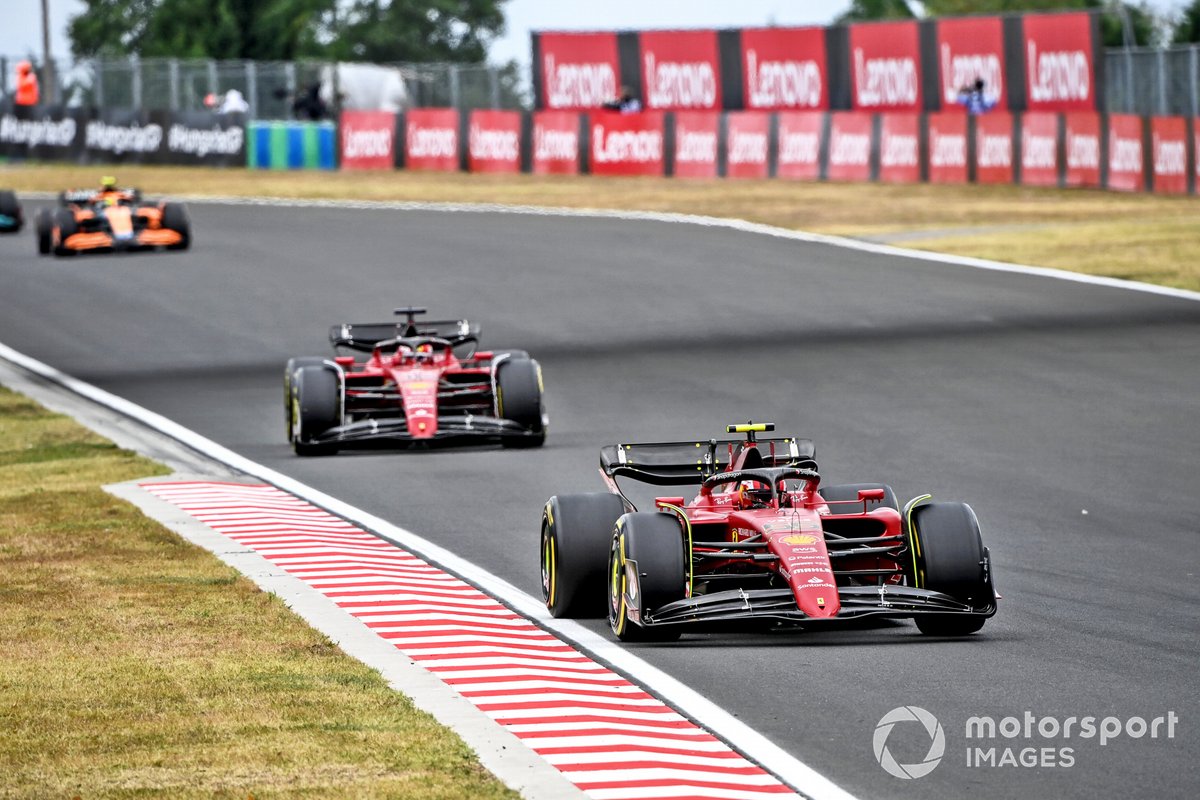 Leclerc said after the race that he wanted to hold on to the medium tyres for as long as possible, only to be called it for the hards. He was moved onto softs at his third stop, but could not catch the cars ahead.

The sixth place finish means Leclerc now sits 80 points behind Verstappen at the top of the drivers' championship heading into the summer break.

A number of drivers struggled with the hard tyres due to the unusually cool conditions during the race, including Alpine's Fernando Alonso and Esteban Ocon, both of whom lost time during the early part of their stints.

Asked if Ferrari had seen what Alpine's hard tyre struggles and considered not pitting to cover Verstappen, Binotto replied: "Yes, we discussed it, so it's not that [the strategy] is all written in stone.

"During the race and looking at what's going on, we have as well looked at what was happening with the other hard tyres.

"We took all considerations, we discussed what would have been best and that's the choice that we made. It certainly was not the right one today."

But Binotto stressed the bigger issue for Ferrari on Sunday was the car's lack of pace compared to what it saw on Friday, when Leclerc had set the fastest time and impressed over the long runs.

"It's important to say that we believe that the car was not working as expected," Binotto said.

"We didn't have the speed we were hoping for looking back at the Friday, and the pace we had in the race conditions on Friday. So today was certainly different conditions, a lot cooler.

"But overall the speed today was not great enough, and whatever tyres we were using, I don't think we were as good as we were looking for."