Johnson will hand over his Hendrick Motorsports Chevrolet Camaro to Alonso at the Bahrain Grand Prix's Sakhir Circuit at the end of the month, with the car already travelling by sea to the circuit.

Alonso will give his McLaren MCL33 to Johnson after the American undergoes simulator training at the F1 team's base.

Johnson and Alonso, via Skype, held a joint press conference at Phoenix ahead of this weekend's race and the Hendrick driver explained how the swap came to be.

"Honestly, the January press conference or press day that we had in Charlotte, North Carolina for the NASCAR series is when Fernando and I had a chance to meet and kind of throw this idea into motion," said Johnson.

"Fernando was coming through on his way to the Rolex 24 and we had a chance to meet.

"He only had to mention it once, he said 'hey man, would you ever want to trade cars? I'm like 'heck yeah''.

"Immediately, we started the process with our teams and it's been a very fun process.

"Everyone at McLaren has been fantastic.

"It's been great to watch Formula 1 with a whole new interest knowing that I get a chance to drive Fernando's car and go watch the final race in Abu Dhabi and then have a chance to driver the car in Bahrain.

"Started in January and here we are in November finishing it off." 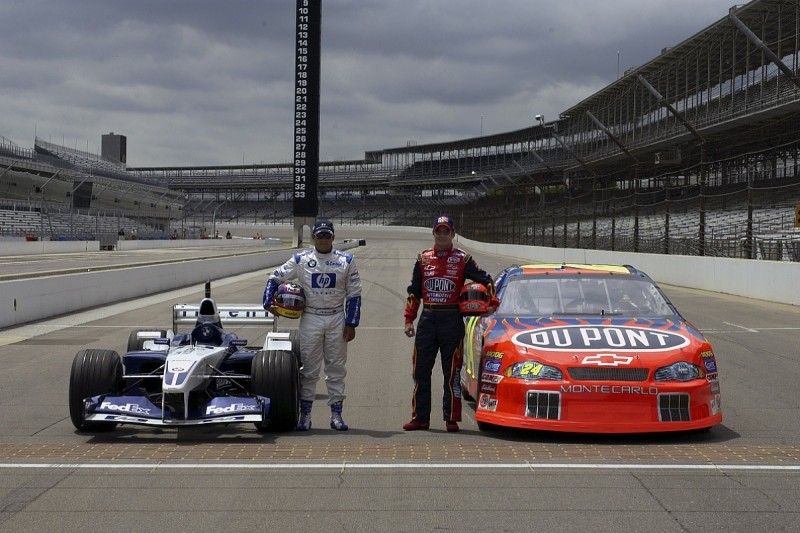 Johnson adds that he has leaned on Jeff Gordon - who drove a BMW F1 car in a ride swap with Juan Pablo Montoya back in 2003 (pictured above) - and that the former NASCAR driver has told him to build up his neck muscles.

Alonso was asked what he is expecting to learn from his test in a NASCAR car and whether it could make him want to race in the series.

He said: "Well the first thing I think is going to be to have fun.

"We all love racing, any type of racing and to test for the very first time a NASCAR car with the huge following and all the repercussion that NASCAR has in the world of motorsports.

"For me [it's] the first thing that I want to experience and I want to have that opportunity in life and it's happening now in a couple of weeks' time.

"I don't have a key answer to that question."