Alonso will skip the race on the last weekend of May, instead making his debut in the Indianapolis 500 in a McLaren entry run by Honda IndyCar squad Andretti Autosport.

His former team-mate Jenson Button remains on McLaren's books until the end of 2018 but is on a sabbatical in a deal brokered by deposed chairman Ron Dennis last year.

While the 2009 world champion would appear an obvious choice, Brown says no decision has been made on who will partner rookie Stoffel Vandoorne, leaving that to racing director Eric Boullier.

"Fernando's replacement driver is not in place," Brown said.

"Those conversations are ongoing, we have a few different options, we will state who that is when we know.

"Eric, who runs the F1 team, is ultimately responsible for making the recommendation as to what driver should go in the car and he will be here at the weekend so I can save questions for him, he is working on it.

"I wouldn't want to share his conversations he has had with whom."

Button did not test with McLaren pre-season, and Brown admitted he did not know if the Briton "has done simulator time with 2017 car".

McLaren would have the opportunity to give Alonso's replacement mileage during next week's in-season test after the Bahrain Grand Prix, but Brown said mileage for Vandoorne was currently the only plan in place.

"I would love to have Fernando to be in two places at one time but we can't, at least that technology has not yet been developed," Brown said. 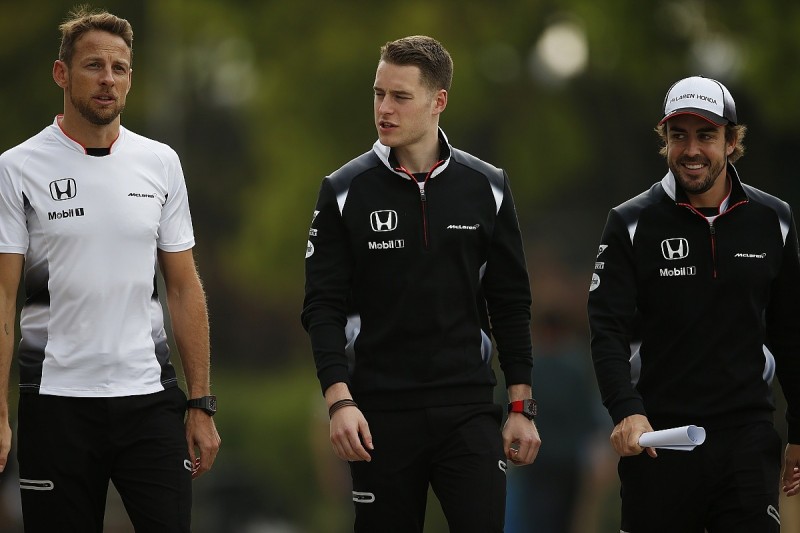 "The opportunity for the prize in Indianapolis is very large and an opportunity that none of us want to miss.

"As Fernando has said - whoever we end up putting in the car, Stoffel is doing an outstanding job, so we will expect whatever the car is capable of, Stoffel to be able to achieve that. As will whoever the co-driver is.

"We have to look at bigger picture and the entirety of what McLaren-Honda is trying to achieve, for the sacrifice of not having Fernando in Monaco but having him in Indy, when we step back and look at the season we will say that was the right decision."

Since Honda's return to F1 in 2015, Monaco has been McLaren's best circuit, owing to the lack of focus on engine performance.

Alonso finished fifth last year, and he hopes to watch McLaren score points from afar in the 2017 race.

"The last couple of years, because of package, it has been best result of the year so we're putting a lot of hopes in that race," Alonso said.

"I hope whoever steps in the car will do a great job.

"Although I am not in the car, points are a strong possibility, we will follow the race in America in different times but supporting from there, so I'm sad to miss it."