The session was heavily disrupted, with Q1 suspended for nearly 45 minutes after the rain intensified following the opening 10 minutes, and when it did get going again it was quickly red flagged for a second time when Romain Grosjean became stuck in the Turn 1 gravel after spinning off in his Haas.

Verstappen largely led the way throughout the session, with Esteban Ocon spending the long Q1 delay at the head of the times after impressing during the initial running, be he appeared to be caught out by a Q3 switch from wets to intermediates.

The Red Bull driver's first Q3 lap was a 1m52.326s, which was over two seconds slower than Verstappen had gone to top Q2, but he looked to be going massively faster with two opening purple sectors on his next lap.

But Verstappen abandoned that run after Sergio Perez had shot to P1 with a 1m52.037s using the green-walled inters, and so Verstappen came in to take that tyre.

Although Verstappen found time at the very end of Q3, he was not in command as he had been before, with Perez and Racing Point suddenly looking to be the pole favourites.

Perez, who had spun on his next lap after seizing P1, was eventually shuffled down to third after Stroll, who had headed out on the wets early on in Q3 in a different approach to his team-mate, put in a 1m47.765s to rise to the front.

Verstappen had to find a way past Kimi Raikkonen's Alfa Romeo before he final run, where he climbed from third to second, but wound up 0.29s behind Stroll. 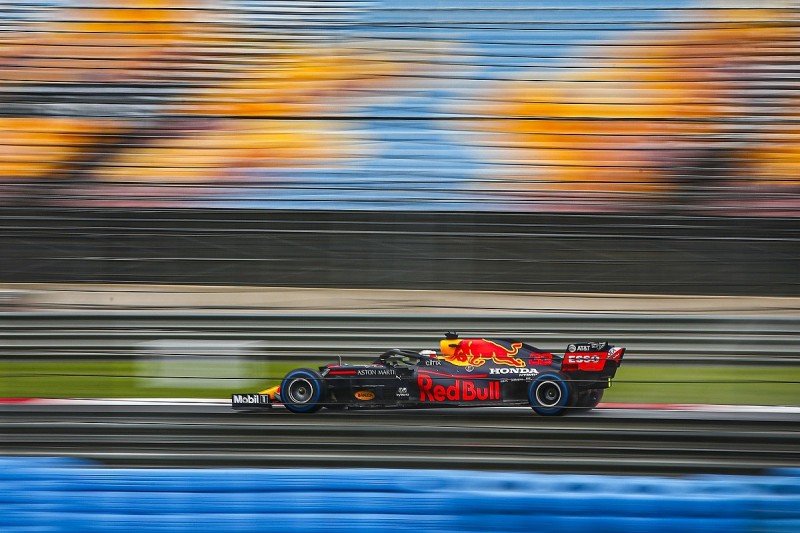 Alex Albon took fourth in the second Red Bull ahead of Daniel Ricciardo, who stayed on the wet tyres throughout Q3.

Hamilton was the lead Mercedes in sixth, having trailed behind team-mate Bottas throughout the sessions leading up to Q3 and during their initial laps on the wets in the last session.

But after Mercedes called its drivers to take the inters, Hamilton was able to improve more, as Bottas set a personal best on his final run but still ended up down in ninth.

Ocon and Raikkonen ended up ahead of the second Mercedes, with Antonio Giovinazzi rounding out the top 10.

Q2 ran uninterrupted throughout, with the drivers finding chunks of time with each lap they set.

Verstappen led the way, nearly two seconds clear of anyone else, while the Alfa Romeo cars reached Q3 for the first time in 2020.

All of the eliminated runners set personal bests on their final laps, but they could not improve by enough, headed by Lando Norris in P11.

Norris and team-mate Carlos Sainz Jr had run with the inters at the start of Q2, but came in for wets ahead of their final runs.

This took them inside the two-minute mark, but they were still big chunk behind the top 10 cutoff, as Norris finished nearly 0.7s slower than Ricciardo.

Sebastian Vettel split the McLarens in 12th, with Charles Leclerc also out in Q2 in 14th, despite his strong pace in the dry practice sessions on Friday, and his P2 in FP3. 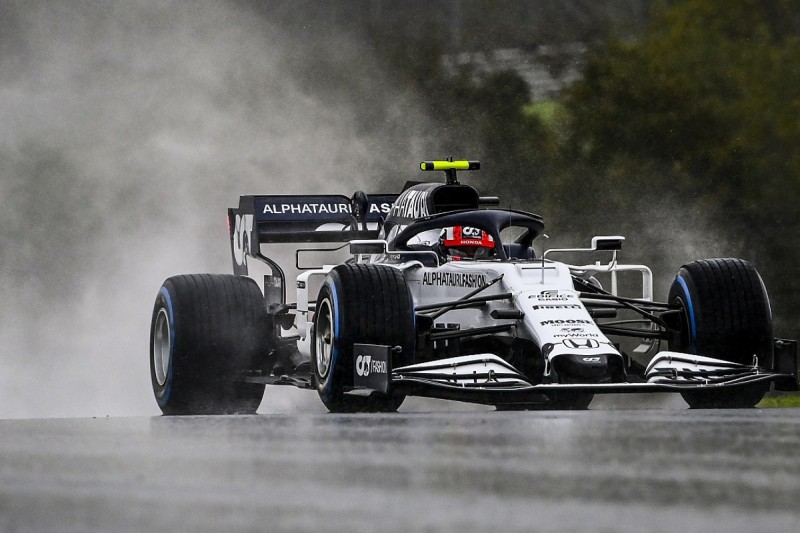 Pierre Gasly was knocked out in P15 despite a late visit to the AlphaTauri pits to take fresh wets, while Sainz faces a post-qualifying investigation after possibly impeding Perez during one run in Q2.

In Q1, Kevin Magnussen was eliminated in 16th as he was caught behind several incidents following the second red flag, one of which was Daniil Kvyat spinning at Turn 3, which cost him the chance to escape the opening segment as he complained about poor visibility.

Kvyat therefore ended up out in 17th, ahead of George Russell, who also lost time running behind the incidents after the second restart - the second of which was Nicholas Latifi spinning off exiting the middle apex of Turn 8 and beaching his Williams in the gravel on the outside.

Russell will start last after his replacement power unit parts will drop him to the rear of field, which will boost Grosjean and Latifi a spot each from P19 and P20.

Verstappen and Albon headed Q1 with the only times under two minutes - as they lapped at the head of the field after the second restart, ahead of the two incidents taking place in their wake.

All laps completed by drivers passing the yellows flying for Kvyat's spin and Latifi's beached Williams will be investigated after the session, which could yet change the order for the grid.

There was also a strange incident at the start of Q2, where the session was allowed to get underway despite Latifi's Williams still being craned away.