Sergio Perez completed the podium in the second Red Bull, with Charles Leclerc and Hamilton behind after their attempts to complete the race on a single set of inters did not pay off.

At the start, where all cars were fitted with intermediate tyres, the top three scrambled off the line in the order they had arrived, with Bottas comfortably leading Verstappen into Turn 1.

Leclerc made the best start of the trio but stayed third after getting close to Verstappen’s outside before falling back as they reached the left-hander.

Despite the tricky conditions, the only lap one incidents were Pierre Gasly tapping Fernando Alonso around as the Alpine tried to sweep around the outside of the first corner, which spun him down to the rear of the field – where he was involved in a clash that led to Mick Schumacher spinning at Turn 4 on lap two – and Nicholas Latifi spinning by himself at Turn 9.

Bottas led by 1.3s at the end of the first lap of 58 and it did not grow much beyond that over the next phase of the race – despite Verstappen searching for wet patches to cool his inter and complaining about a dashboard error message he was spotting each time he changed gear.

By lap 10, Bottas’s lead had reached 2.4s – having grown suddenly on the previous two tours – at which point Hamilton had reached seventh after nipping by Sebastian Vettel at the final corners on lap one and then scything past Yuki Tsunoda and Lance Stroll in successive tours on laps eight and nine, after Tsunoda had held him at bay in the early stages. 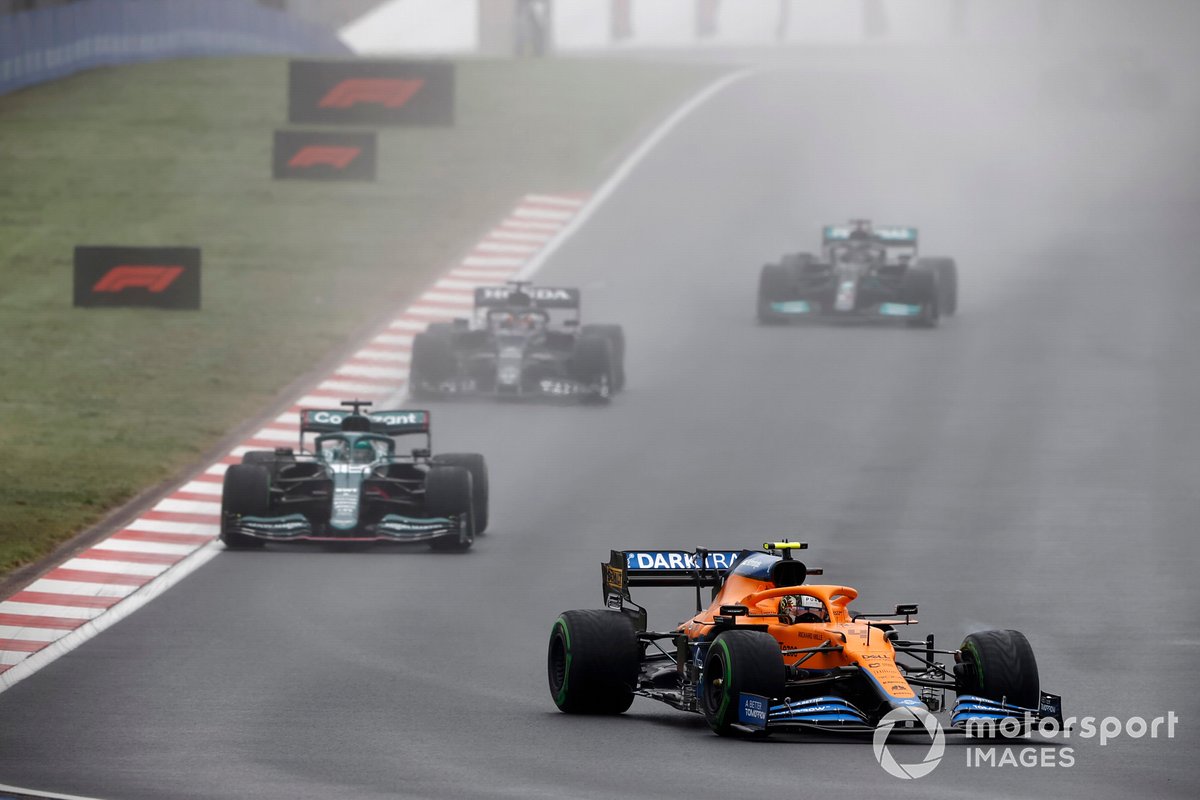 Hamilton then nipped ahead of Lando Norris to take sixth at Turn 9, as Bottas continued to extend his lead over Verstappen – the two Mercedes cars at this stage the only cars lapping in the 1m33s bracket and Leclerc falling back from Verstappen by several seconds.

But as the race approached the 20-lap mark, with Hamilton up to fifth having easily passed Gasly ahead of the Turn 12 stop at the end of the back straight on lap 14, Verstappen raised his pace and began to close in again on Bottas as the focus became about how the inters were holding up.

Bottas also upped his speed as the leaders moved to the low 1m33s, the Finn initially holding his gap at just over three seconds until he lost half a second sliding wide out of the first corner on lap 20.

But from there, Verstappen could not close in much, with all the leaders moving to find wetter patches as their inters wore down – Hamilton in fifth initially tearing into Sergio Perez’s advantage ahead before the Mexican driver’s pace improved and he stayed clear in fourth, albeit well behind Leclerc, who continued to keep the leading duo in sight.

McLaren pitted Daniel Ricciardo for fresh inters from the rear of the field, but the Australian did not go any faster and was indeed slower than the leaders, who began to consider if a one-stop strategy would be feasible as the half-way point approached.

Here, Bottas began to pull away from Verstappen again – his lead rising to four seconds at lap 30 – while Hamilton, who at one point had to back out of lapping Nikita Mazepin when coming close to the Haas at the Turn 11 kink in the middle of the back straight, finally reached Perez’s rear, the pair nearly 20s off the lead. 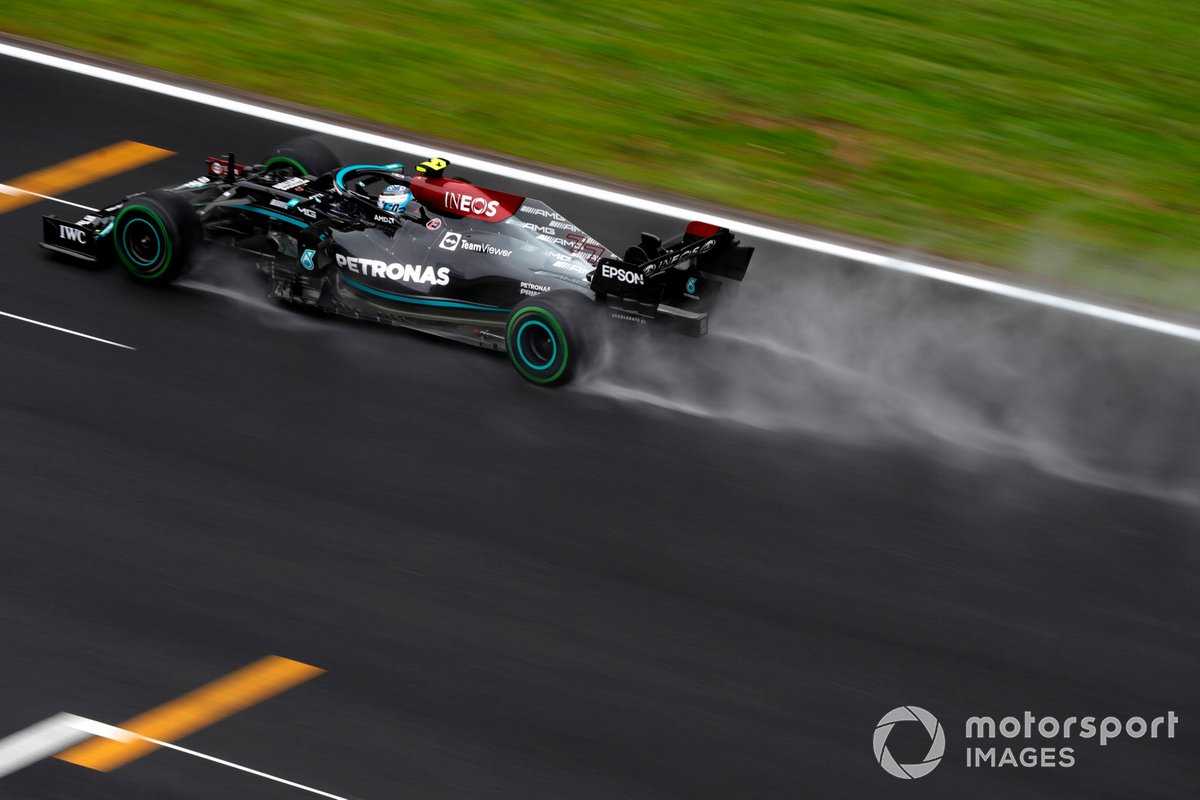 They engaged in a thrilling fight at the end of lap 34 and into lap 35, Hamilton attacking to the Red Bull’s outside at Turn 12 and staying alongside all the way to the final corner, Perez at one stage cutting behind the pitlane entry bollard after the Mercedes forced him wide at the penultimate corner.

The battle continued to Turn 1, where Perez boldly hung on to the inside line and stayed in fourth place, with the battle then superseded by the leaders pitting.

Red Bull pulled the trigger by pitting Verstappen for fresh inters on lap 36, with Bottas following him in the next time around and easily keeping the lead, while Perez came in on the same back and rejoined behind Hamilton.

The world champion, and Leclerc up ahead, stayed out – Hamilton arguing against a Mercedes call to pit on lap 42.

Bottas, over seven seconds clear of Verstappen, who reported a steering wheel “left-hand down” issue as the final quarter approached, initially steadily closed on Leclerc on his fresh inters.

He then gained large chunks of time as the final laps approached and retook the lead with a major grip advantage on the wet line down the inside into Turn 1 on lap 47, at the end of which Leclerc finally pitted.

From there, Bottas easily ran clear of Verstappen to claim a first win of 2021 by 14.5s – setting the fastest lap at 1m30.432s on the final lap – while Perez took third after closing in on Leclerc on lap 51.

Ferrari had hoped Leclerc could close back up the leading two on his fresh inters, but he hit the bad graining phase all the drivers were finding a few laps after pitting, which meant Perez could easily take the place with a run to the outside of Turn 12. 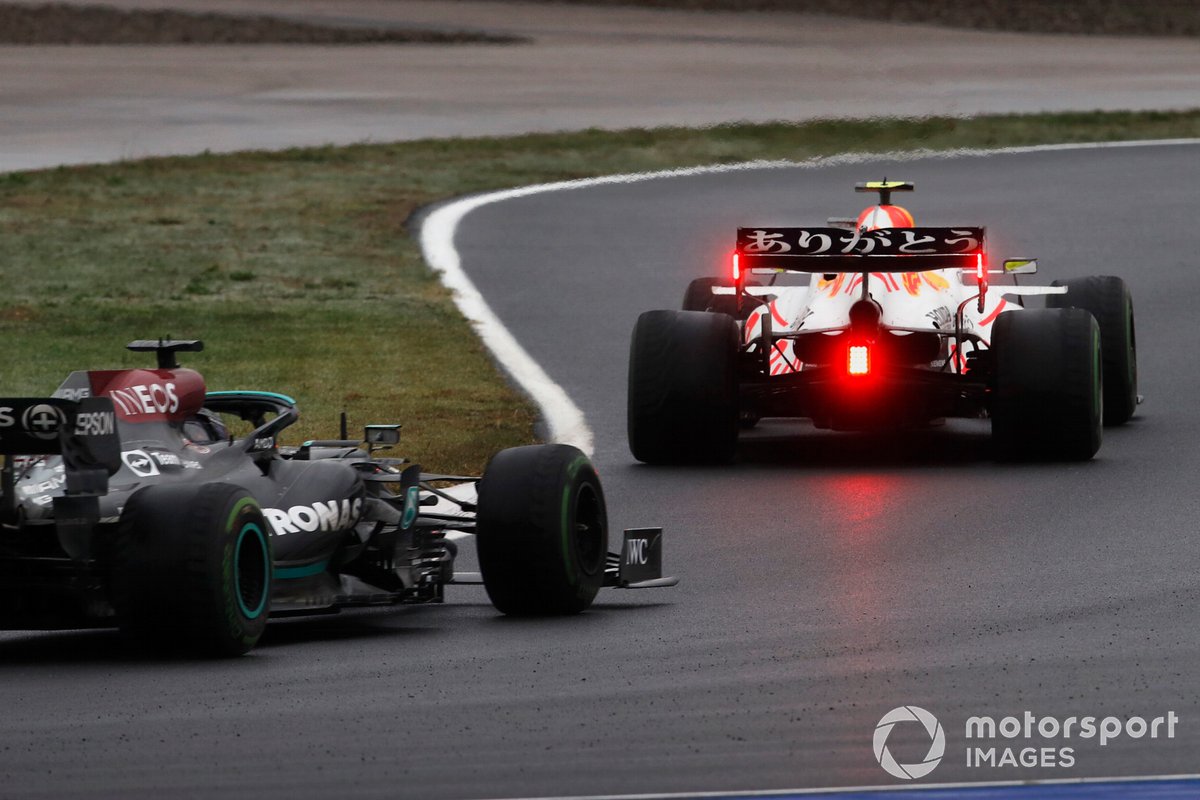 The lap before Perez passed Leclerc, Hamilton had finally come in, Mercedes feeling it had no choice but to abandon the no-stop strategy because of Gasly’s presence in sixth – already on a second set of inters.

Hamilton initially got close to Leclerc on his new inters, but then fell back dramatically as he reached the graining phase, to which he angrily criticised Mercedes’ decision to pit him in a series of radio messages.

He was able to hold off Gasly to the flag, the AlphaTauri driver having served a five-second penalty at his stop for the lap one Turn 1 clash with Alonso, who did likewise for his lap two shunt with Schumacher.

Norris took seventh not far from Gasly’s rear, with Carlos Sainz Jr eighth after rising rapidly up the order from the back row of the grid with a series of bold early passes – the Spaniard then also having to recover from a slow pitstop.

In that recovery, Sainz passed Lance Stroll, who finished ninth, and Esteban Ocon, who was the only driver to complete the race on a single set of tyres.

Remarkably given the conditions, all the cars finished – Ricciardo’s early stop meaning he finished behind the Alfa Romeo pair in 13th and Alonso coming home 16th.

The only driver to attempt a switch to slicks was Sebastian Vettel, who tried the mediums with 22 laps to run, but he came back in after just a single tour, where he was very slow and twice went off the track, to go back to the inters.

Vettel ended up 18th – only ahead of the Haas duo, where Schumacher got back ahead of Mazepin after recovering from his Turn 2 spin as a result of the contact from Alonso.