Verstappen had a sudden loss of power exiting the first chicane at Monza that his team's engine partner said was a reaction to excessive wheelspin after a kerb strike.

The resultant rise in engine revs after Verstappen went over a kerb activated a Honda protection mode and an FIA system that Autosport understands relates to how the governing body ensures driver aids are not being used.

Versappen's power cut in no way implies that Red Bull or Honda are employing a traction control-style system, but a protection mode that reduces torque when a driver suffers too much wheelspin would partially replicate the phenomenon.

Honda's system caused the initial loss of power as it cut in to avoid excessive revving damaging the engine, triggering a torque reduction when Verstappen was at full throttle.

After this, the FIA system - which is the same for all teams - filtered the engine back to full power.

Traction control has been banned in F1 since 2008.

F1's technical regulations state that no car may be equipped with a system or device that is capable of preventing the wheels from spinning under power, or of compensating for excessive torque demand by the driver.

Honda's F1 technical director Toyoharu Tanabe told Autosport that it was the "the first time we had that" FIA system activated.

Asked if the situation could be avoided in the future, Tanabe said: "It's not easy because the FIA filter activated. We will think about that.

"There is a chance to [have] another one. It's difficult, but we will try to analyse exactly what happened, and if there is any way to prevent that situation."

The freak power cut was in no way linked to an issue with Honda's Spec 4 engine, which appeared in all four of its cars at the Italian GP. 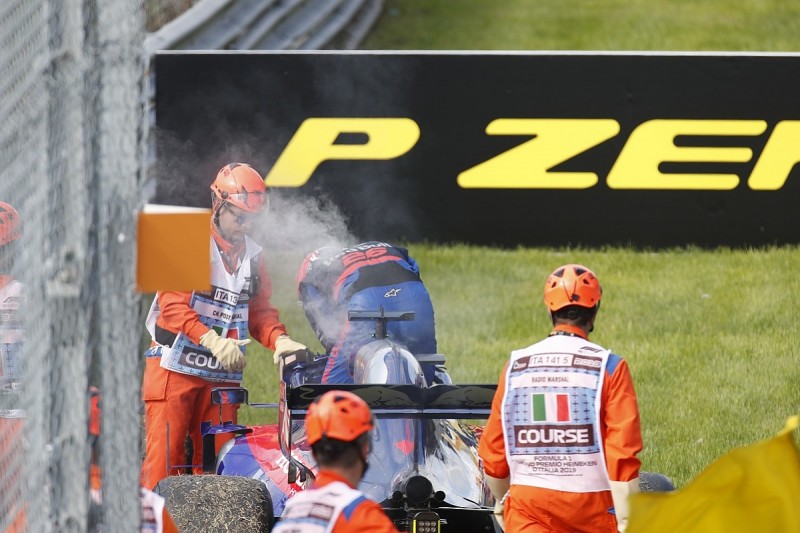 Honda's upgraded engine ran without issue until Daniil Kvyat suffered an oil leak while running in the points.

"We're investigating the cause of the oil leak," said Tanabe on Sunday.

"When we stopped the engine, the engine data shows no problem.

"The internals of the engine should not be a problem, but we don't know if somewhere in the engine is repairable or not, or on the chassis side.

"So we're investigating. The engine running data is OK. But the oil level [dropped]."