F1 testing tech: Teams push the limits of the rules in Austria

The recent return of in-season testing in Formula 1 has rarely provided any surprise parts appearing on the cars, but this week's two days in Austria proved otherwise

Both Williams and Force India caught the eye with new designs at the Red Bull Ring, which would have had their rivals reaching for the rulebook.

Whereas Williams introduced a clearly non-legal part (see below), Force India's nose is more of a conundrum.

During the test where parts of the team's major B-spec upgrade were also run, the nose of the car sported two distinct nostrils venting air through the crash structure.

New rules were introduced this year to prevent the finger-like nose-tips of last year, and as result many teams have opted for a very short nose, which creates less of an obstruction to allow more airflow to reach the back of the car.

Force India's car has so far sported a mid-length nose, somewhat easier to crash test, but suffering on the aerodynamic side. This new nose would appear to allow more airflow to pass along the car, via the nostrils, but it retains its length to better meet the FIA crash tests.

Now the question is whether the nose is legal or not? Either it could be legal with some strict interpretations of the nose rules or it's a testing-only design, ahead of a new shorter nose being introduced.

Since 2009 the rules have prevented vented noses, as a response to Ferrari's ducted design of 2008. The nose has to form a single open section, which effectively prevents overt open ducts as seen on the Force India during this test.

However closer inspection of the rules shows this is only applied to the middle section of nose, not the front and rear 150mm lengths.

It's possible these exclusion zones could allow a multiple section nose with the one-piece nose tip reconnecting the open sections. Taking this route means Force India can retain the structure of the old nose and create a new airflow regime over it with these ducts.

It's potentially a cost effective route, because it may not necessarily require recertification via crash tests. 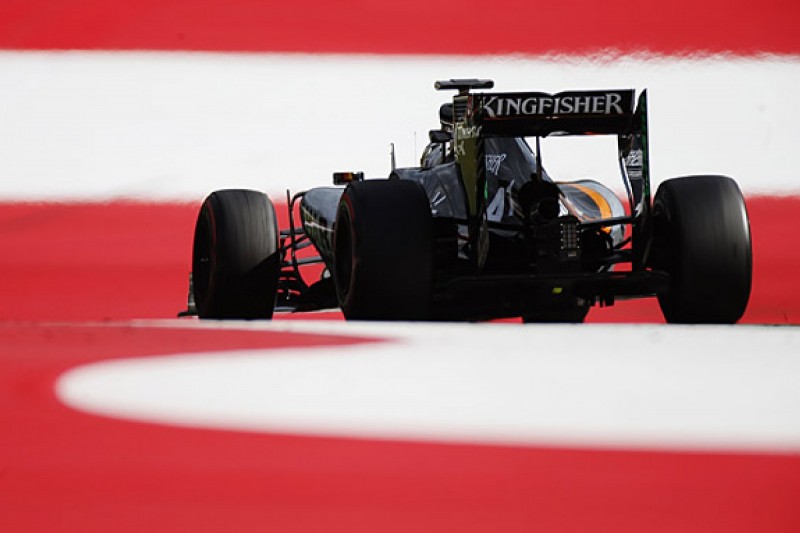 Elsewhere on the car, the B-spec update included a new front wing, turning vanes and sidepods.

The front wing follows a Red Bull design philosophy, in both its wing shape, endplates and the winglet mounted above it.

The sidepods take inspiration from up and down the pitlane. They are far narrower towards the rear, the hot air outlets forming the coke bottle tail shape, as seen on the Toro Rosso, while the neatly faired-in exhaust tailpipe follows a Lotus design.

More parts need to be fitted to the car and the monocoque modified for the B-spec set up to work, and these will not be seen until the British Grand Prix next week. 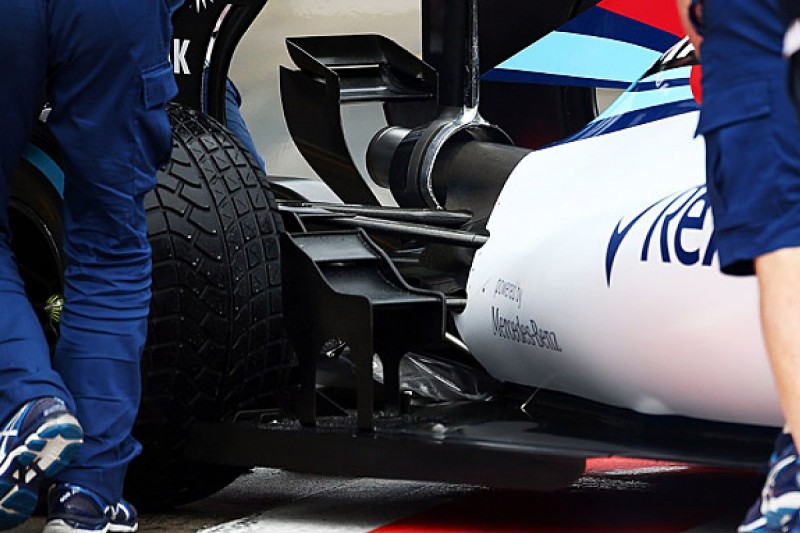 On the first day of test, Williams ran its car with interesting winglets mounted low ahead of the rear tyres. In this position the two element wings would create an upwash, which would be useful for both downforce and a drag reduction, by managing the airflow over the rear tyres.

Since 2009 complicated shapes sprouting from the around sidepods have been banned by a series of exclusion zones. Close inspection of the technical regulations shows a small loophole in the rules, in the area ahead of the rear tyres, but not one that these winglets could sit within.

It transpires these devices were not a development aimed at future races, but a temporary part used to create an aerodynamic effect, which the team wanted to evaluate for future design consideration.

Quite how Williams could legally create such an upwash ahead of the rear wheels is not clear.

Bodywork rules prevent such devices, and the only option would be to create a rounded extension of the sidepods to mimic the pre-2009 flicks on the sidepods. It looks like this will be an area to keep an eye on in the future.

In addition to the winglets, Williams fitted a fence to the edge of the floor in the same area.

Again this wasn't a legal part, but a means to evaluate an aerodynamic effect. At various points during the test the fence was fitted with sensors to monitor the airflow in that area.

How F1's ownership could change hands