Ricciardo's 1m18.047s, just after 1pm on day two of the second test, was almost three tenths faster than Felipe Massa's effort in 2008, which had previously stood as the fastest lap of this configuration of the Spanish Grand Prix circuit.

It came as Red Bull and Mercedes used Pirelli's new hypersoft tyre for the first time, but Wednesday's main story so far was offered by Fernando Alonso and McLaren when the Spaniard stopped on track after an oil leak.

That forced McLaren into an engine change, and abruptly ended a promising start to Alonso's day.

The Spaniard went quickest in the opening hour with a rapid 1m19.856s on the hypersoft tyres, displacing Hamilton's medium-shod Mercedes by more than a second.

Alonso then went on to rack up decent mileage across the first two hours of the morning, before grinding to a halt on an escape road on the outside of the entry to the Turn 7 left-hander. 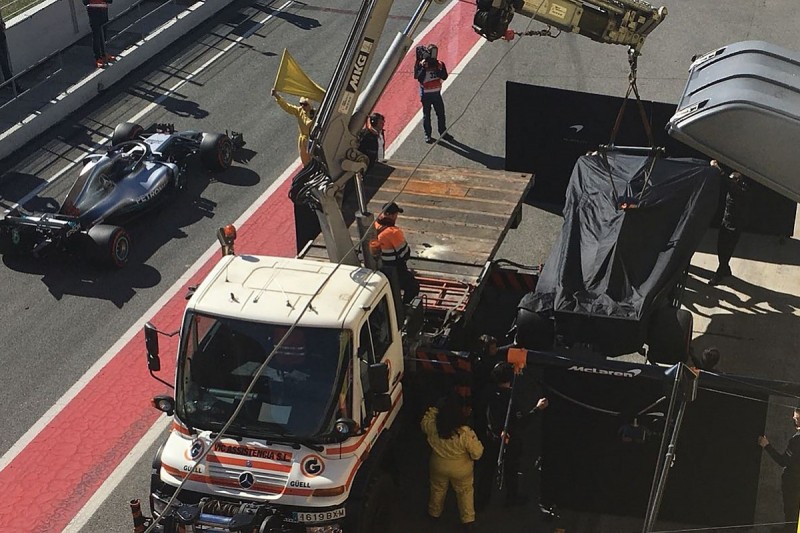 He had already dropped down the leaderboard, though, with Hamilton and Force India's Esteban Ocon having spells at the top of the timing screen.

The shock improvement from Ocon was shortlived as his fastest final sector was at odds with an otherwise unremarkable lap, and his time was scotched a few minutes later for cutting the final chicane.

That left Hamilton - who also had a fastest lap removed for a track limits violation - untroubled for most of the morning, with various benchmarks set on medium, supersoft, and ultrasoft tyres.

His eventual best on the ultrasofts was 1m18.400s, but then Ricciardo had the hypersofts fitted to his RB14 and usurped him by a scant 0.043s.

Ricciardo then bolted on another set of the new-softest compound and increased the gap to 0.353s just after the usual start of the lunchbreak, which has been scrapped so testing can continue through to 6pm local time to help make up for the time lost because of last week's poor weather.

The leading two drivers were well clear of the rest of the field, with Sebastien Vettel's Ferrari best of the rest, 1.1s off the pace in third, having set his fastest time on the soft compound.

Kimi Raikkonen was due to carry out Ferrari Wednesday's running but was replaced by Vettel before the start of the day because he felt unwell.

Alonso was still fourth-fastest despite his stoppage, 1.809s off the pace.

The same gap from Ricciardo to Alonso covered the rest of the field, with Carlos Sainz Jr fifth for Renault ahead of Romain Grosjean, Lance Stroll, Ocon, Brendon Hartley and Charles Leclerc.