As Raikkonen came within a tenth of a second of team-mate Sebastian Vettel's unofficial lap record on Friday, Fernando Alonso suffered a dismal final morning.

After declaring on Wednesday he did not need another day's testing to be ready for the season opener in Australia, Alonso managed just seven laps before causing a red flag.

Alonso was on his first flying lap, and had gone fastest of anyone at the time in the first sector, when he ground to a halt on the escape road on the right-hand side of the track before Turn 7.

The McLaren pulled over in the exactly the same place as on Wednesday, coming to a halt just before the uphill left-hander, and the incident had the same consequences as well.

McLaren was forced to change the engine, but this time Alonso didn't emerge again by 1pm - and unlike on Wednesday he had not completed a lap time before the stoppage either.

That meant Alonso's tally stood at seven laps as the day hit the usual lunchbreak point, although there is no official pause in action on Friday to help compensate for last week's weather-affected test.

At 1pm Raikkonen's nearest challenger was Romain Grosjean's Haas, which lapped in 1m18.590s on the supersoft tyre.

Brendon Hartley was third-fastest on a 1m18.949s, although that lap seemed to be hampered at the end as the hypersoft-shod Toro Rosso caught Daniel Ricciardo's Red Bull.

Lewis Hamilton focused on race simulations - racking up a morning benchmark total of 97 laps - and so was only fourth-fastest on a 1m19.464s set on supersofts, with Esteban Ocon two tenths slower with softs on his Force India.

Robert Kubica forfeited his final morning of running at Williams, which swapped its run plan and put Sergey Sirotkin in the car first ahead of Lance Stroll taking over this afternoon.

Sirotkin was sixth-fastest on softs, 0.025s quicker than Ricciardo's Red Bull on mediums. 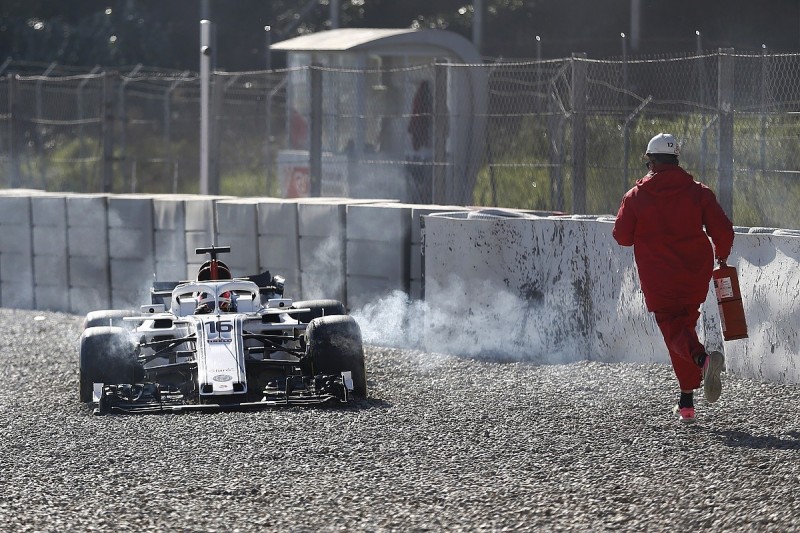 Charles Leclerc was slowest of the eight drivers to set a lap time, but like Alonso he did not appear again before 1pm after causing a red flag.

The Formula 2 champion spun into the gravel at Turn 12 while on a hot-lap, the third time this week a Sauber driver has caused a stoppage by beaching the car.

That was still better than Carlos Sainz Jr's morning - his Renault remained in the garage with just four installation laps on the board after a gearbox problem.

The clear winner of the F1 testing war