Vettel became the first F1 driver to break the 1m20s barrier on Thursday when he set a 1m19.341s on soft tyres, coming within 0.031 seconds of the winter benchmark established by Mercedes' Valtteri Bottas on Wednesday.

At the start of the final hour, Vettel edged even closer to the Finn's best with a set of super-softs, falling short by just 0.004s, despite clearly backing off along the start/finish straight.

The Ferrari man continued to sandbag in the final sector on his subsequent runs using ultra-softs, which came after the first stoppage caused by Stoffel Vandoorne's McLaren grinding to a halt just after the pit exit with around half an hour left to run. 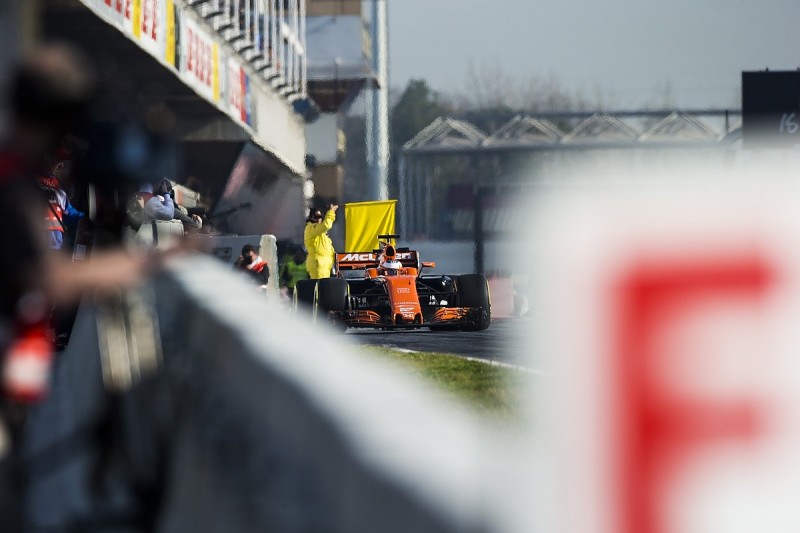 Once the action resumed, Vettel finally beat Bottas's Wednesday time, first with a 1m19.164s, before improving to a 1m19.024s on ultra-softs, despite clearly keeping lap time in reserve.

Vettel's nearest challenger was Lewis Hamilton, who moved up to second on super-softs late before posting a further improvement on ultra-softs to end up with a best time of 1m19.352s.

The Mercedes driver's fastest lap came moments before the red flag was brought out for a second time, again the result of Vandoorne coming to a halt - this time at Turn 10 - which effectively ended the session.

Esteban Ocon set the third-fastest time for Force India, a 1m20.161s on ultra-softs entering the final hour, which had him in second place before Hamilton's final gains.

Daniil Kvyat was another late improver for Toro Rosso, going fourth fastest on super-softs, four tenths ahead of Daniel Ricciardo, who was 1.800s off the pace using softs on the Red Bull.

Kevin Magnussen was sixth for Haas, just 0.039s slower than Ricciardo but using super-softs, followed by Vandoorne, who at least set the Honda-powered squad's fastest time of the winter so far before his MCL32's two stoppages.

Jolyon Palmer was eighth for Renault ahead of Sauber's Marcus Ericsson - the morning's most-productive man with 88 laps on the board - and Williams rookie Lance Stroll, who racked up 85 laps in another trouble-free session.