Ferrari's Kimi Raikkonen topped the final morning of the first Barcelona Formula 1 pre-season test, as Pirelli's new wet and intermediate tyres made their debuts on an artificially-soaked track

After being doused by water trucks, the track only remained wet enough for full wet tyres for the first hour, and few drivers took the opportunity to get to grips with the revised rubber.

Raikkonen and Red Bull's Max Verstappen were among those to sample it, with the pair both setting best times in the 1m40s range.

Verstappen made the switch to intermediate tyres 20 minutes into the second hour, and later became the first to break through the 1m30s barrier.

The Dutch driver's 1m29.867s was the best on intermediates by just over two seconds, and remained the morning's benchmark until Raikkonen switched to slicks with just over an hour remaining. 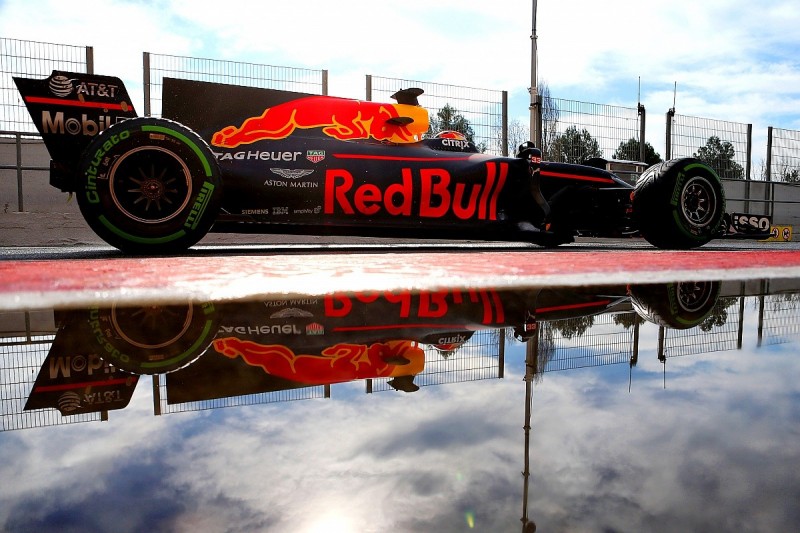 After a cautious start, Raikkonen got down to a 1m25.557s lap on soft tyres, still more than five seconds off what Ferrari team-mate Sebastian Vettel managed on the rubber on Wednesday.

Raikkonen lost top spot briefly to Force India's Sergio Perez, but improved again to a 1m22.305s to lead the morning.

Romain Grosjean made a late appearance on the super-softs to jump up to second with a 1m22.739s for Haas, while McLaren's Stoffel Vandoorne did likewise to go third on a 1m23.918s.

Those improvements at the very end of the session pushed Verstappen - who set his best time with mediums - down to fourth, followed by Perez and his former team-mate Nico Hulkenberg for Renault.

Bottas only appeared in the final 15 minutes of the morning, after Lewis Hamilton - scheduled to drive the W08 - sat out the session.

Three-time world champion Hamilton made it clear on Wednesday he was not eager to drive in the wet, and Mercedes reported an electrical fault made it impossible for him to go out.

Daniil Kvyat also lost the chance to drive in the morning because Toro Rosso was forced to replace a Renault power unit, but the Russian will share the afternoon session with team-mate Carlos Sainz Jr.

The afternoon session will also begin in wet conditions, with the Barcelona track to be soaked once again during the lunch break.