Bottas set the fastest time of the winter so far on Wednesday morning, a 1m19.310s on super-soft tyres, and this proved enough to keep the Finn on top at the end of the day.

Lewis Hamilton took over driving duties in the Mercedes W08 after the lunch break, and recorded a best time of 1m20.782s on softs, 1.392 seconds off the pace.

That put the three-time champion only sixth on the leaderboard, although he completed 79 laps, including a 20-lap stint on ultra-softs, giving Mercedes a total of 149 for the day.

Felipe Massa remained second for Williams by virtue of his morning time, ahead of Raikkonen, who caused the second red flag of the test when he spun and hit the barriers at Turn 3 just under two hours into the afternoon.

The impact damaged the front and the left side of the Ferrari SF70H, and prevented Raikkonen from running again for the rest of the day. He only managed 53 laps. 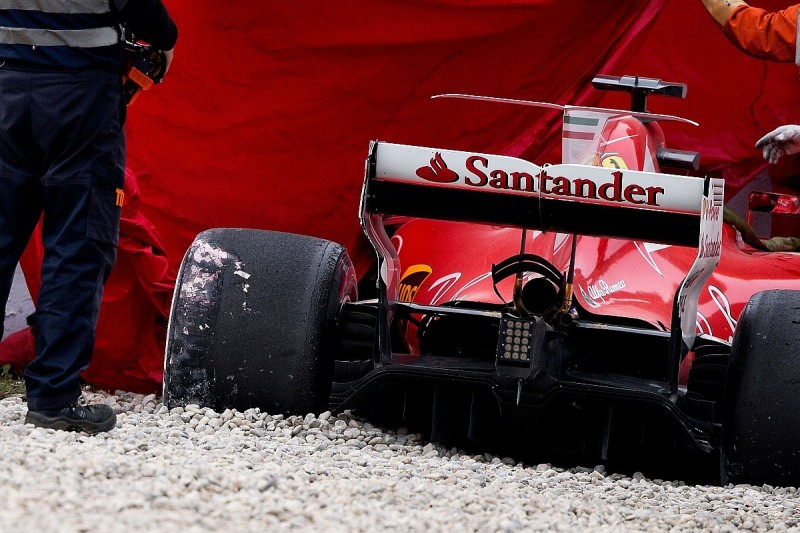 There was another red flag when Max Verstappen came to a stop at Turn 12 towards the end of a race simulation with 20 minutes left on the clock.

Despite his stoppage, the Dutchman ended up with 102 laps to his credit, more than any other driver, with his morning time proving enough to keep him fourth in the order.

Williams rookie Lance Stroll took over from Massa during the lunchbreak and set the best time in a smooth afternoon, after an incident-strewn first week.

The young Canadian logged 59 laps, recording a best effort of 1m20.579s on super-soft tyres to beat Hamilton by just over a tenth.

McLaren's Fernando Alonso failed to improve on his morning time, and ended the day in 12th, between Sauber duo Pascal Wehrlein and Marcus Ericsson, with 46 laps completed.

Ericsson caused a third and final stoppage just moments after Verstappen's car had been recovered, as he came to a halt at Turn 7.

Jolyon Palmer, taking over from Renault team-mate Hulkenberg in the afternoon, completed the leaderboard in 14th, some 5.4s off the pace.