On a day disrupted by the Barcelona track being artificially watered overnight and again at lunchtime, the window for useful running was reduced.

Very few teams made use of the wet track after lunch, with Mercedes' Valtteri Bottas one of the few drivers to complete many laps before it was dry enough for slicks.

Verstappen spent a rare spell at the top of the times when he beat Raikkonen's morning benchmark in the middle of the afternoon, but the Ferrari driver then twice went faster on soft tyres to end the day.

Mercedes was only eighth on the first day of pre-season that didn't seem to go smoothly for the world champion team.

Lewis Hamilton didn't get any running in the morning as Mercedes said it was working to fix an electrical fault, so by the time the car was ready shortly before lunch - when the track had dried - Bottas was sent out ahead of schedule to get a handful of laps under his belt.

While the Finn ended the day with 68 laps, Mercedes also called time on its running early, after engineers "found something in the data they didn't like" in the final hour. 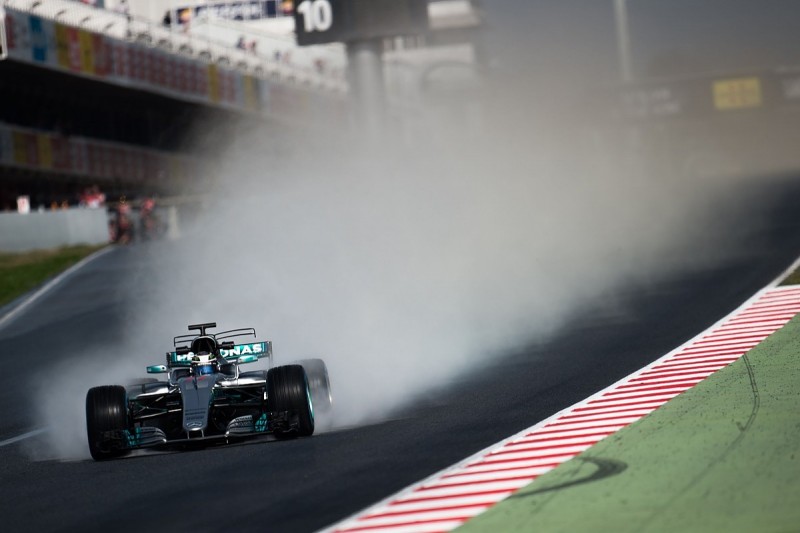 Jolyon Palmer improved late on in the Renault - which he took over from Nico Hulkenberg for the afternoon - to jump up to third on softs.

Romain Grosjean and Antonio Giovinazzi - two of the busier drivers in the wet morning running for Haas and Sauber respectively - leapt up to fourth and fifth late on.

Giovinazzi briefly ran fourth following a series of ultra-soft runs, but he was bumped down a place when Grosjean took super-softs in the final 15 minutes of a day where he completed 118 laps.

Sergio Perez had got himself up to third with a super-soft run mid-afternoon, getting several laps at a decent pace out of the 2017-spec tyres that are designed to be more durable than their predecessors, but other teams' improvements pushed him back to sixth by the chequered flag.

Seventh place was filled by the McLaren of Stoffel Vandoorne, which used ultra-softs again to go fractionally faster than team-mate Fernando Alonso managed on the same tyre on Wednesday.

At the bottom of the order, Toro Rosso had a day to forget, only completing one lap first thing in the morning with Daniil Kvyat.

The team then opted to change its Renault engine, with the target of giving both Kvyat and Carlos Sainz Jr some running in the afternoon, but the STR12 never made it out of the garage.

Williams was unable to run at all on the final day, owing to damage sustained on Wednesday when rookie Lance Stroll crashed the FW40.

The second pre-season test at Barcelona starts on Tuesday, March 7.