Mercedes, Ferrari and Red Bull are tipped to be a long way clear of the rest of the Formula 1 field in 2017, and each team has taken a different approach with its new car

While Mercedes and Red Bull's concepts are at opposite ends of the aerodynamic spectrum, Ferrari appears to have gone for something in between.

One of the key factors that plays a part in the differences between the top cars is rake, a concept Red Bull has pursued aggressively in recent years.

Running a high level of rake - with the rear of the car raised higher than the front - can be beneficial if the ride height can be kept stable to maximise the aerodynamic gain. 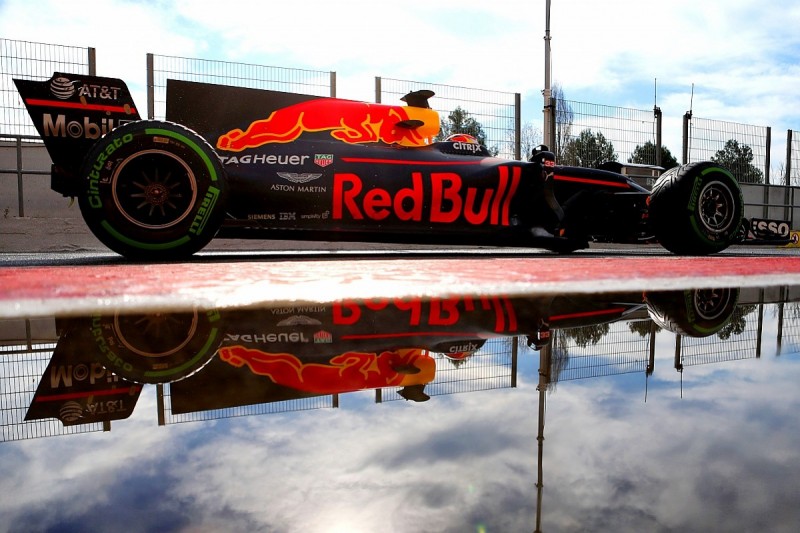 The 2017 regulations accentuate the benefits of the raked philosophy, because the reduction in length of the T-tray/splitter underneath the front of the chassis means a car can run more rake without the front of the floor hitting the ground.

Mercedes does not run a high level of rake in its set-up, while Ferrari has edged towards the Red Bull concept with its 2017 design.

Red Bull's rake allows its front wing to run much closer to the ground, and its wing design differs significantly from its main rivals. 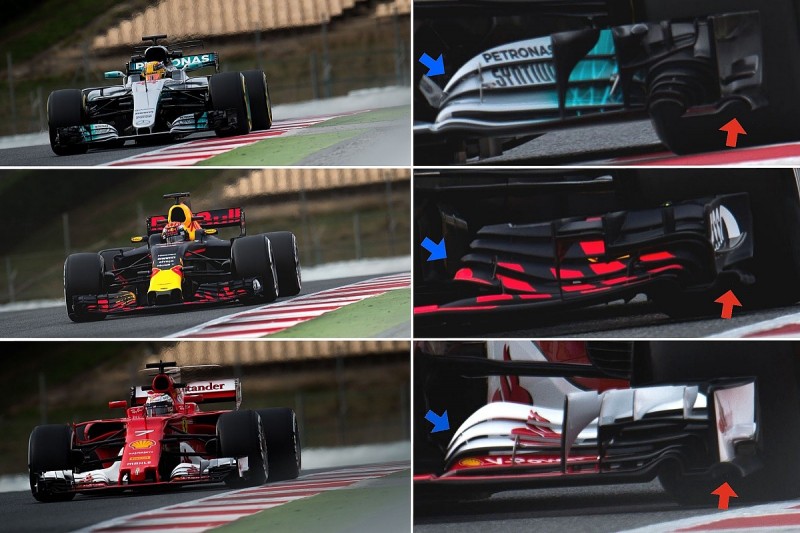 For 2017, the inside part of the front wing flaps on the Red Bull are angled upwards, rather than the more traditional downwards direction still used by Mercedes and Ferrari.

Behind the front wing, the Mercedes features the first major difference to its rivals, with its raised wishbone design aimed at doing less 'damage' to the airflow passing through the car.

There is a potential handling benefit here as well, as the revised suspension geometry can also improve the consistency of the contact patch of the tyre, helping grip and potentially tyre degradation. 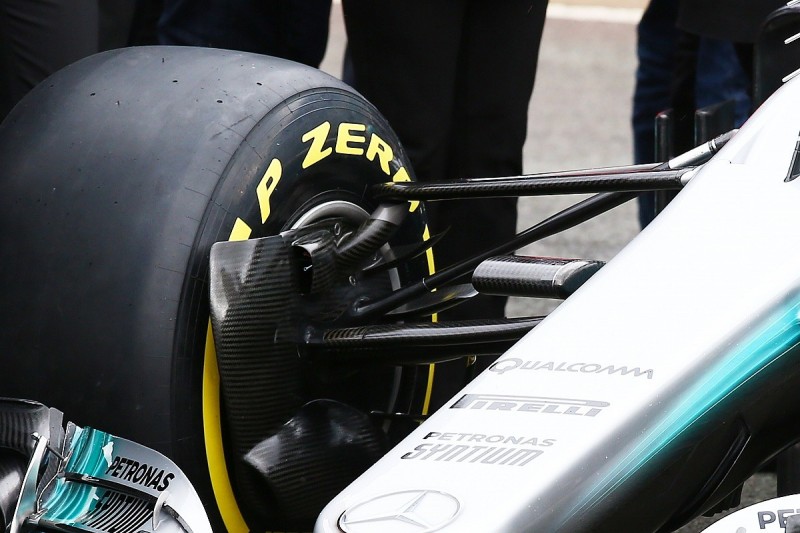 Ferrari has left its suspension layout alone, but it has focused on a very aggressive design around the front of the sidepods, aiding the pathway to the radiators and electronics that need cooling, while also offering a more sculpted surface for the airflow to follow as it heads towards the back of the car.

All three teams now use an S-duct - which takes air from underneath the car and channels it to exit over the top of the chassis - with Red Bull and Ferrari returning to the concept for the first time since 2015 and '08 respectively.

The tip of the Red Bull nose has drawn plenty of attention, taking advantage of the cross-section rules to have an inlet at the front of the tip. 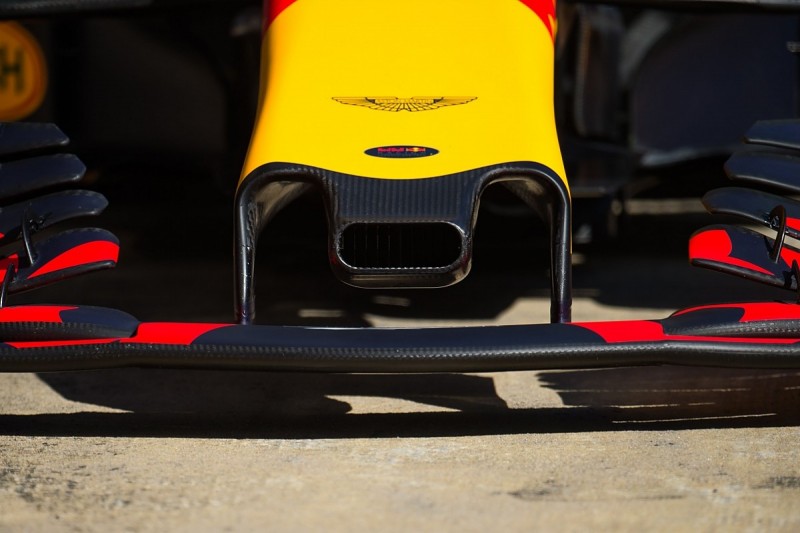 Vertical strakes inside the nose bring this within the scope of the regulations because if a slice is taken through it at any point, a hole is not exposed. But the open end reduces the blockage to the airflow, which passes through the 'gap' and is directed out of a small hole slightly further back.

The bargeboards and turning vanes are another area where Mercedes and Red Bull have taken different approaches, while Ferrari opted for a design somewhere between the two. 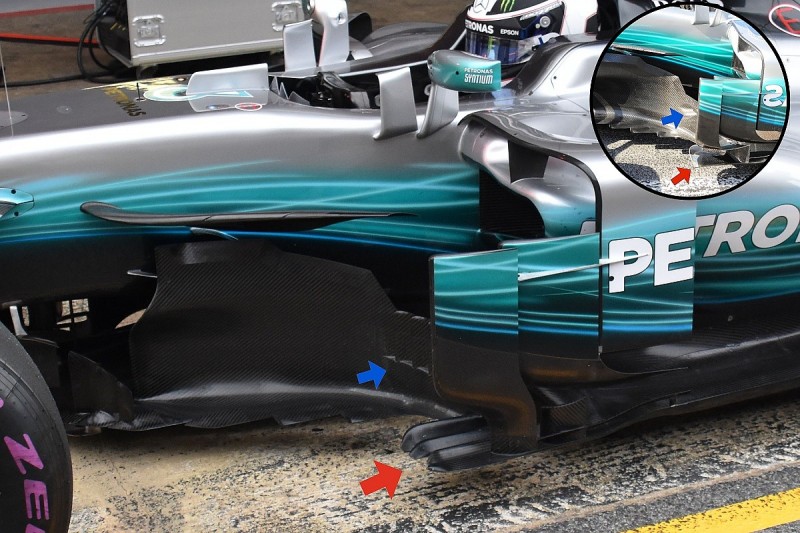 Mercedes continues its philosophy of opting for shorter, more aggressive individual pieces with multiple slots in this area to work the airflow hard, while Red Bull's design features longer strokes aimed to make sure the airflow needs less work as it moves down the car.

Red Bull has also bucked convention with its sidepods, which don't feature a flat upper surface and do not make use of the new full width available in the regulations. The Mercedes and the Ferrari are wider at the top and feature more aggressive undercuts to feed air through to the Coke bottle area towards the rear of the car.

The Red Bull design means the outside edges of the car taper away dramatically, leaving much more of the floor exposed - clearly visible from above. 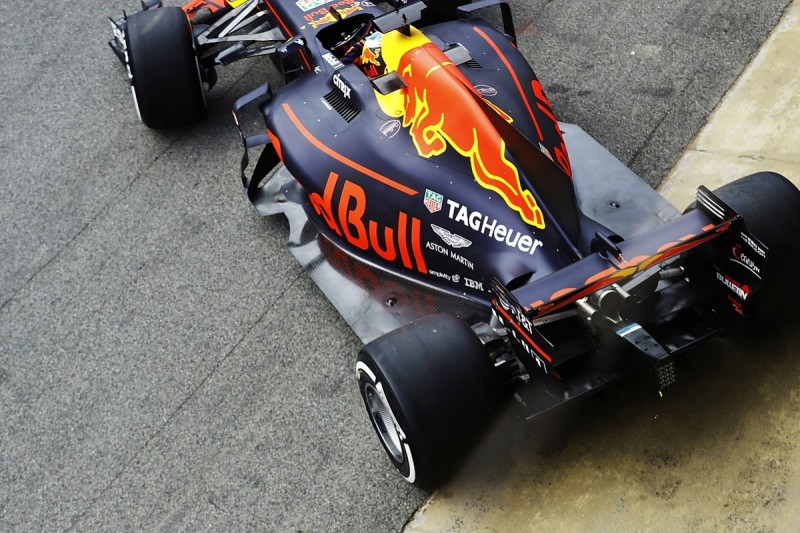 One of the biggest areas for gains in the 2017 regulations - along with the bargeboard section in front of the sidepods - is the diffuser, which has been made 50mm wider, 50mm taller, and now starts 175mm further forward than it did under the previous set of rules.

The raked attitude of Red Bull's cars enables the team to exploit the diffuser to a degree that reduces the reliance on the rear wing to create downforce - which also reduces drag and assists efforts to make up for the Renault engine's power deficit.

Mercedes and Ferrari seem more interested in how the outer part of the diffuser works with the brake duct winglets and the wake created by the rear tyre. Ferrari has retained a complex stack of fins on the outer portion of the diffuser - a solution that it revised over the course of the two tests. 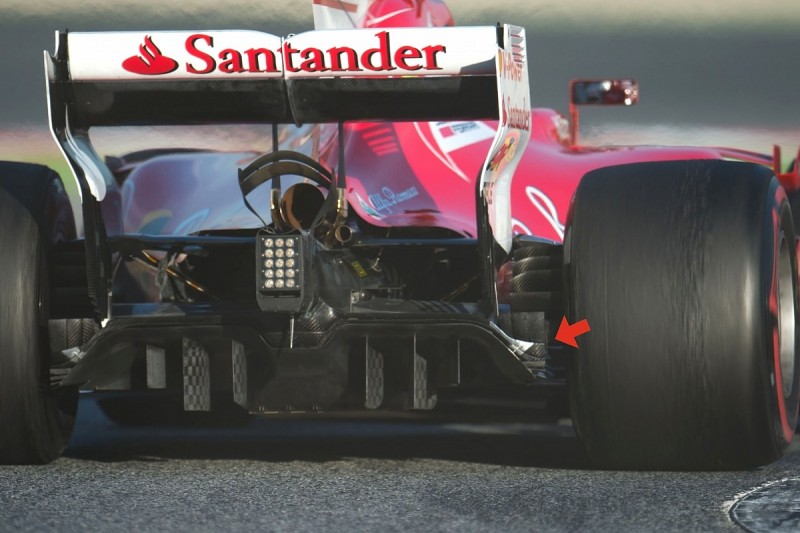 All three teams have taken different approaches to the return of shark fins on the back of the engine covers, with Ferrari going for the largest. Mercedes has a smaller design that was often taken off during testing, while Red Bull has gone for a far more subtle approach.

Christian Horner has been a vocal opponent of the return of shark fins, primarily for aesthetic reasons. But due to the rake Red Bull runs, the fin is in fact less effective on the RB13 than it will be on other cars.

The lower rear wings for 2017 mean they are affected more by turbulence from the airbox and engine cover - but the fin manages this disruption by realigning the airflow. Red Bull's rake angle means any disturbance to the rear wing is reduced anyway.

Mercedes and Ferrari have also exploited a loophole in the regulations that has left scope for T-wings to run in front of the main rear wing.

The aim of this extra wing is to reshape the airflow ahead of the rear wing - it won't really create downforce in its own right, but it will help redirect the airflow, effectively giving the rear wing an increased angle of attack. 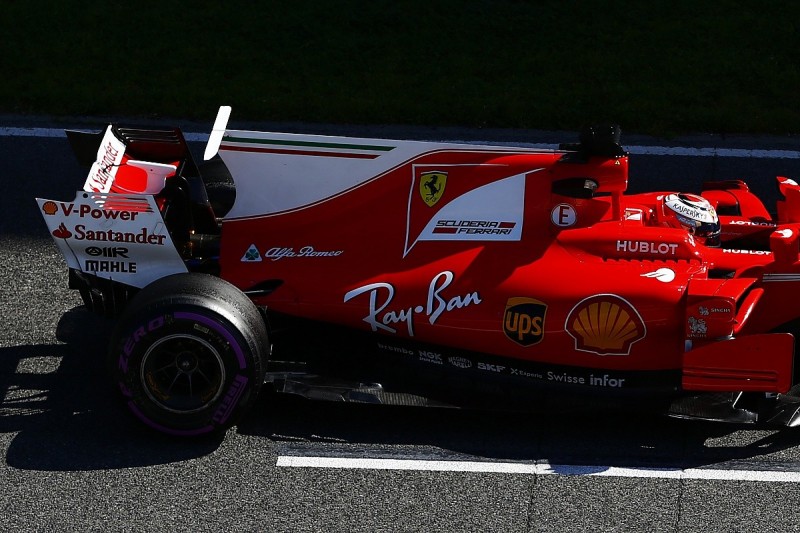