Ferrari Formula 1 driver Charles Leclerc has edged out Red Bull's Max Verstappen in third and final free practice for the Singapore Grand Prix, which was truncated due to heavy rain.

While Saturday's final one-hour practice session started on time, heavy rainfall in the streets of Singapore meant the pitlane remained closed for the first half.

When the pitlane finally opened at 18:30 local time, just 30 minutes of practice remained to sample the wet conditions.

AlphaTauri's Pierre Gasly was the first man to venture out on track, inevitably bolting on Pirelli's full wet tyres for an exploratory run.

While Gasly set a cautious timed lap of 2m09.894s, he was joined by team-mate Yuki Tsunoda and the six cars from Alfa Romeo, McLaren and Aston Martin.

But efforts by F1 to dry the track in the first 30 minutes appeared to pay off as Alfa's Valtteri Bottas quickly suggested that intermediates were a better option.

When reigning world champion Max Verstappen joined the fray with 20 minutes left on the clock, intermediates were indeed the tyre of choice on his Red Bull.

On the inters, Verstappen took 1.7 seconds out of Carlos Sainz, who had been the quickest of the full wet runners, and it prompted his colleagues to follow the Dutchman's example and use the green sidewalled tyres from that point onwards.

Verstappen generally stayed in front despite momentarily being jumped by first Gasly and then Ferrari man Charles Leclerc, as track conditions picked up quickly and times took a tumble with seconds at a time. 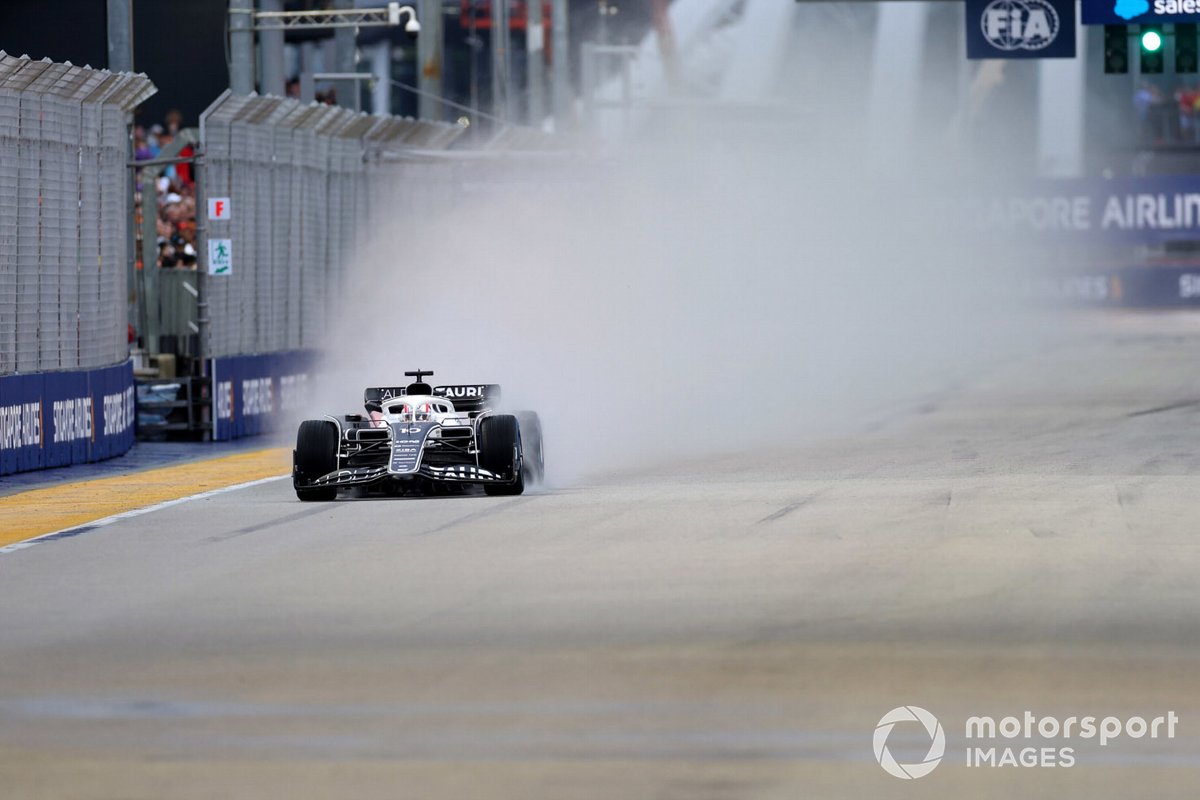 The runaway championship leader was also the first driver below the two-minute barrier, but Leclerc then took over the lead with a 1m58.899s.

Leclerc carried on and established a 1m57.782s late on to top the session, while Verstappen's fastest effort pitted him five tenths in arrears.

Behind the pair, Sainz took third, a full second down on his team-mate, with Alpine's Fernando Alonso best of the rest in fourth.

Sebastian Vettel was eighth in the second Aston, with George Russell the first of the Mercedes drivers in ninth and McLaren's Daniel Ricciardo rounding out the top 10.

Gasly ended up in 13th ahead of Mick Schumacher and team-mate Tsunoda.

Lando Norris was 16th for McLaren followed by the first Williams of Alex Albon.

Alfa Romeo duo Bottas and Zhou Guanyu propped up the timesheets, only ahead of the second Williams of Nicholas Latifi.