Formula 1 cars now appear set to retain shark fin engine covers in 2018, despite an original push earlier this year by teams and the FIA to outlaw them on visual grounds

An outcry from fans at the beginning of this season - when F1's new generation of cars sprouted shark fins and T-wings - prompted the Strategy Group to put in place regulation changes that would ban them for next year.

However, following the latest Technical Regulations Meeting that took place earlier this week, it has emerged that teams and the FIA are now reconsidering the situation regarding the shark fins.

Teams are unhappy with the amount of valuable sponsorship space that has had to be given up to bigger race numbers on cars, following a rule change earlier this year.

Ever since the Spanish Grand Prix, F1 teams have had to display bigger race numbers and names on their cars in a bid to help fans identify drivers.

Following discussions to find a better answer for the number situation, it has now been suggested that the shark fins come back to accommodate them.

Force India technical director Andy Green said that, following support from teams, a proposal would now be put to F1's Strategy Group for new sporting rules that stipulate the shark fin be used for identifying drivers.

"They are looking at a changing in the wording [of the rules] to bring the shark fin engine cover back again," he said, "because lo and behold teams have realised it takes away sponsor space.

"It will go to the Strategy Group in their next meeting and we fully anticipate the engine cover [fin] coming back again."

Although the shark fin engine covers are now likely to return, F1 teams and the FIA have stood firm on seeing through the ban on T-wings.

One further change to F1's technical regulations that has been approved by teams for 2018 is a ban on 'monkey seats' at the rear of cars. 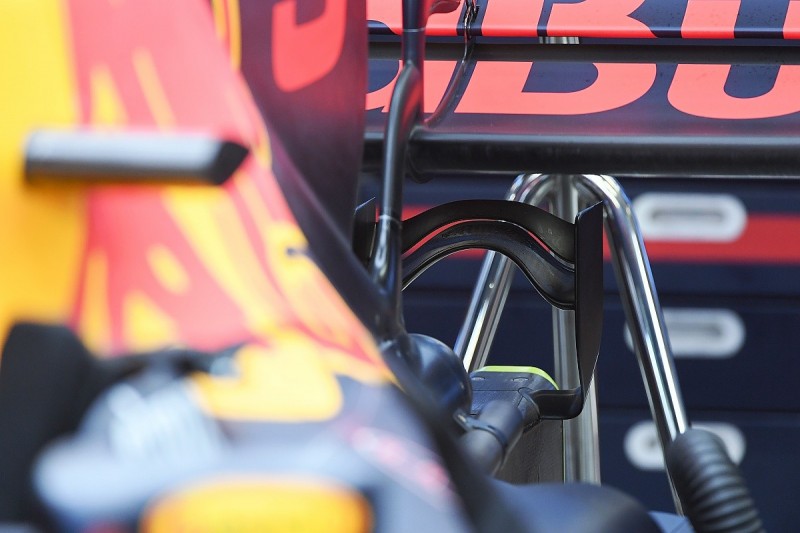 These mini wings, which sit underneath the rear wing, have grown in complexity over recent years as teams seek any extra downforce they can.

The FIA has grown concerned about teams blowing exhaust air over them through the use of clever engine modes.

There were worries about a potential new development war that could rival the intensity of the blown diffuser battle during the V8-engine era.

To prevent the need for the FIA to intervene and get involved in policing complex engine mapping settings, teams have agreed to get rid of the monkey seats instead.

Green added: "I think the FIA were concerned that teams were starting to utilise engine modes to energise the wing, which is something they have been against for quite a while.

"They wanted to ensure that route was closed and everybody agreed.

"There was unanimous agreement from all teams that we don't want to go down that route and have the FIA check all the engine maps.

"We would rather get rid of it. It has put the FIA's mind to rest."