F1 rookie Max Verstappen 'not even close to limit' on debut

Verstappen, 17, who will replace Jean-Eric Vergne at Toro Rosso and thus become the youngest driver to race in F1 history next season, completed 22 laps in the first practice session for Sunday's Suzuka race, and set the 12th fastest time.

The Dutch teenager, whose running was cut short by an engine failure in the closing stages, wound up only four tenths adrift of team-mate Daniil Kvyat after his first experience of current F1 machinery.

He told reporters after the session that he was focused on racking up mileage rather than setting a quick time.

"Of course I was not even close to the limit; I was just driving safely without doing any crazy stuff," said Verstappen, who previously tested a three-year old Toro Rosso to secure his superlicence.

"For me the main thing today was just to try to make a lot of laps.

"The biggest challenge was just getting used to the car really - it's a bit different to the 2012 car.

"All the systems, throttle application, and then you have to work with the whole team; [use] all the buttons on the steering wheel.

"That was new to me too, but I think it all went well."

The Dutchman also said he had not been phased by the complexity of the engine and energy recovery systems on this year's breed of F1 car.

"As a younger generation you grow up with all that kind of stuff," he said. 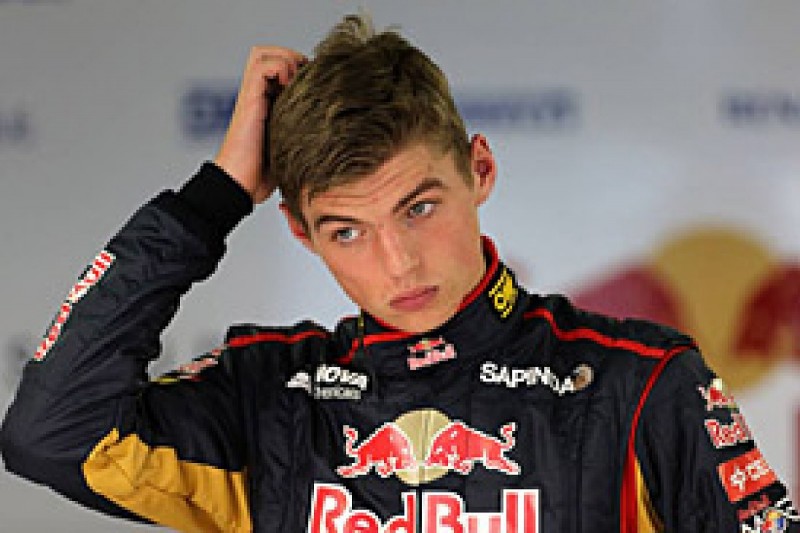 "You play many times on the PlayStation and you can see the many buttons - they are all there - so you already have a first feel for it."

NOT PHASED BY JUMP FROM F3

Verstappen said he found the jump from karting to F3, where he has been a race winner in his first season of single-seater racing, bigger than the jump from F3 to F1.

"[Jumping from karting to F3 was] bigger, because you have to learn everything - braking shapes, getting a feel of a racing car, because at the end of the day a racing car is a racing car," Verstappen added.

"When you jump into an F1 car things are basically the same [as F3], it just happens quicker and in a different way in engine driveability, but in general it was closer to an F3 car than jumping from karts to F3."