Max Verstappen topped opening practice for the Qatar Grand Prix as the Formula 1 drivers got their first taste of the Losail International Circuit on Friday.

Drivers’ championship leader Verstappen enjoyed a decent margin over AlphaTauri’s Pierre Gasly and Mercedes’ Valtteri Bottas by the end of FP1, starting the weekend on the right foot for Red Bull.

First practice in Qatar took place in daytime, meaning it was not fully representative of either qualifying or the race, both of which will begin at dusk in cooler conditions.

Verstappen spent the early part of FP1 on the hard compound tyre, trading fastest times with McLaren’s Lando Norris on mediums, but was able to enjoy a 0.3 second margin over the field once they had completed their initial runs.

While Bottas initially took P1 for Mercedes when making the switch to soft tyres - despite running beyond track limits on his fastest lap - Verstappen was able to strike back and post a best time of 1m23.723s.

It gave Verstappen top spot by four-tenths by the end of the session as former team-mate Gasly shot up to second place with a quick run using the soft tyres late on.

Red Bull did query the abuse of track limits during the session after the FIA opted not to delete any laps despite revealing it would be policing five corners this weekend on Thursday. Race director Michael Masi told the team he was letting drivers “find their feet” in FP1 before clamping down later in the weekend.

Verstappen’s title rival, Lewis Hamilton, could only finish the session in fourth place, 0.786s off the Red Bull’s lap. Throughout the session, Hamilton reported that his engine felt down on power, but was reassured by his race engineer that his straight-line speed was not hugely down on that of his rivals.

Hamilton debuted a special helmet design for the Qatar weekend in FP1. The design prominently features the Progress Pride flag, which combines the rainbow LGBTQ+ flag, black and brown stripes to represent marginalised LGBTQ+ communities of colour, and the transgender pride flag. 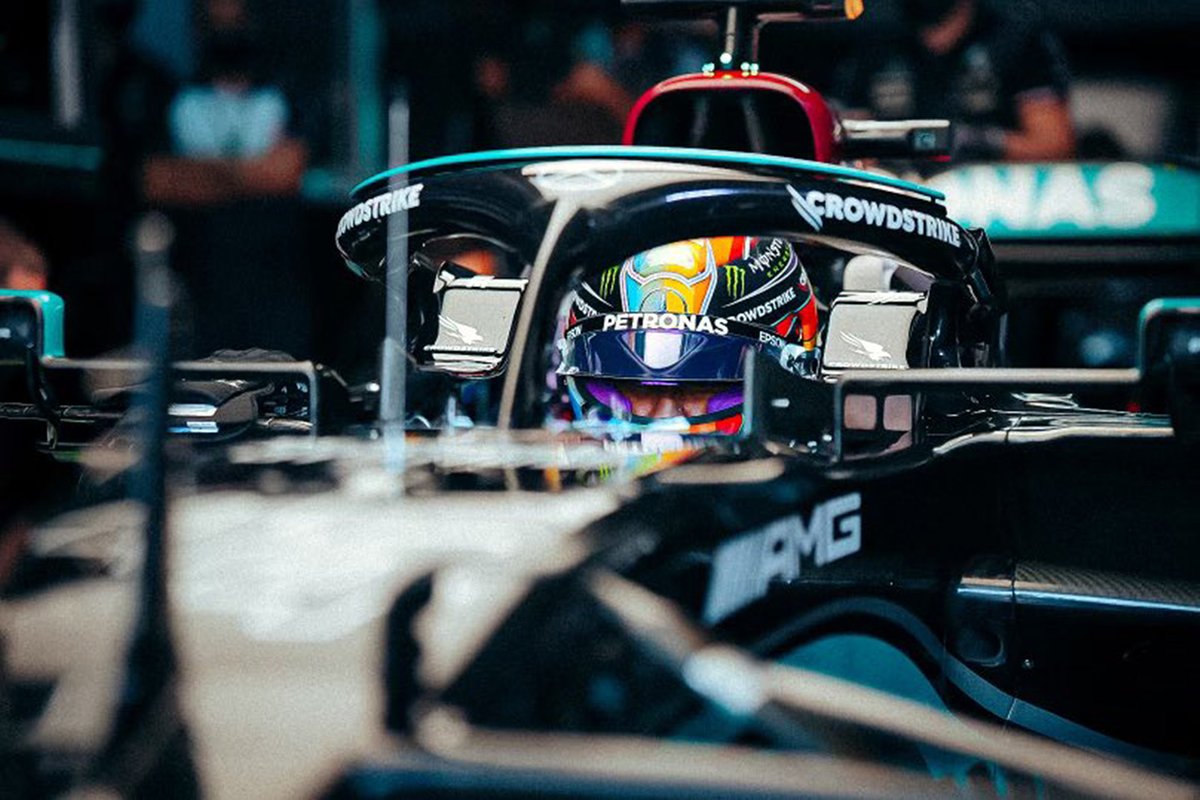 Yuki Tsunoda finished the session an impressive fifth, giving AlphaTauri two cars in the top five, while Carlos Sainz Jr was the lead Ferrari in sixth place ahead of Charles Leclerc in seventh who opted for a late run on the softs.

Sergio Perez took eighth for Red Bull ahead of Alpine’s Esteban Ocon and Norris, both of whom set their fastest times on the medium compound tyre. Norris was forced to pit after appearing to lose power following a run over the kerbs at the exit of Turn 15, but got back to the pits and returned to the track later in the session.

Daniel Ricciardo took 11th for McLaren ahead of Aston Martin’s Sebastian Vettel, who reported that he felt something loose by his right foot in the session, prompting the team to pit him.

Fernando Alonso could only finish 17th for Alpine after the team was forced to prop his car up on jacks early in the session to complete some work. He was able to return to the track and complete 21 laps in total.

Mick Schumacher escaped a trip through the gravel late in the session to finish 18th for Haas ahead of Lance Stroll, who reported a brake failure and could complete just 11 laps. Nikita Mazepin propped up the running order in the second Haas car, finishing eight-tenths of a second off his team-mate’s time.