Leclerc, who has yet to finish an F1 or FIA Formula 2 race at Monaco, had to abort a couple of potentially even faster laps late on. But his 1m14.531s posted on medium tyres kept him at the top of the timing screens, despite the late improvement from Perez.

Defending champion and new points leader Max Verstappen, meanwhile, ran in fourth as the Mercedes contended with further porpoising trouble aboard the W13.

The first practice to take place in Monaco on a Friday during the modern era was typified by a breathless run of fastest laps from Max Verstappen and the Ferraris to that led to constant changing at the top of the leaderboard in the early part of the hour.

The leaders diverged with Verstappen sticking to the hardest available C3 compound, while the Ferraris opted for the yellow-walled C4 medium Pirellis.

Verstappen had been first out on track ahead of Alex Albon, George Russell, Sainz and Red Bull team-mate Perez.

The Dutch racer had complained of early DRS activation problems, like those that hobbled him in qualifying and the race last weekend in the Spanish Grand Prix.

But he was soon up to speed, as Daniel Ricciardo set the early benchmark with a 1m20.364s effort to lead Fernando Alonso and McLaren stablemate Lando Norris - still under the weather after his bout of tonsilitis in Spain.

Leclerc was the first driver to launch under the 1m20s, romping to a 1m17.993s before Sainz pounded round the principality seven tenths faster only moments later as the newly resurfaced track started to rubber in.

Then Verstappen commenced his initial stint on hard tyres, moving top with a 1m16.582s to sit clear by half a second. 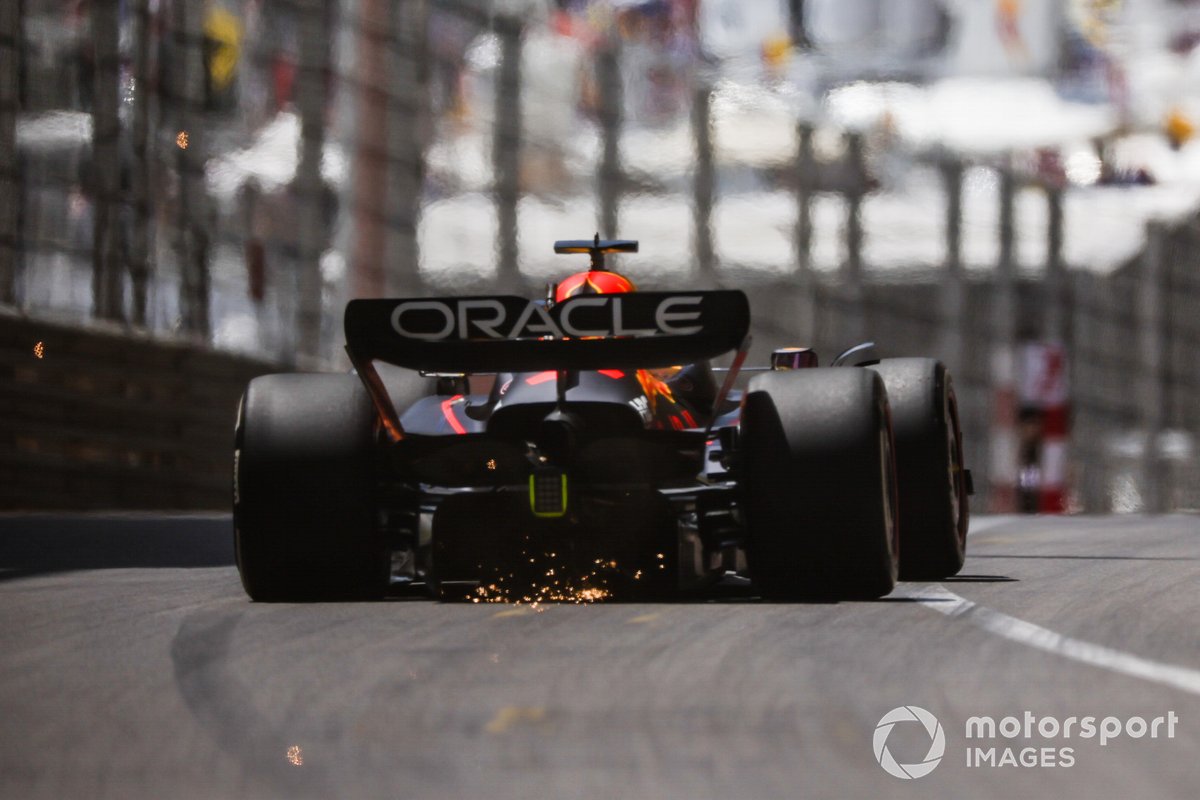 As the field chased after the 1m10.166s lap record set by Lewis Hamilton in Q3 in 2019, Leclerc then ran fastest in all three sectors.

Verstappen fell just a tenth shy next time around, the RB18 completing the tour in 1m16.276s after 10 minutes.

While Hamilton and Russell complained of extreme bouncing returning with a stiff set-up around bumpy Monaco, Verstappen then dropped below the 1m16s as he sailed to a 1m15.933s on the slower Pirellis.

Sainz ran second, just a thousandth off team-mate Leclerc, who had just gone fastest with a 1m15.714s. But the home hero’s rhythm was quickly interrupted when Leclerc locked the front-right over the bumps into Sainte Devote and sent it down the escape road.

Verstappen doubled down by running fastest in sectors two and three to move top once again with his 1m15.327s turn of speed.

But then the frenetic changing of times at the top of the leaderboard was interrupted by a red flag after 20 minutes.

Mick Schumacher had complained of a transmission gremlin and then stopped at the entrance to the pitlane. The position of his Haas notably forced Alonso to a halt when he was unable to manoeuvre past the stricken Schumacher, forcing the Alpine driver to toggle reverse. The blockage swiftly led to red flags. 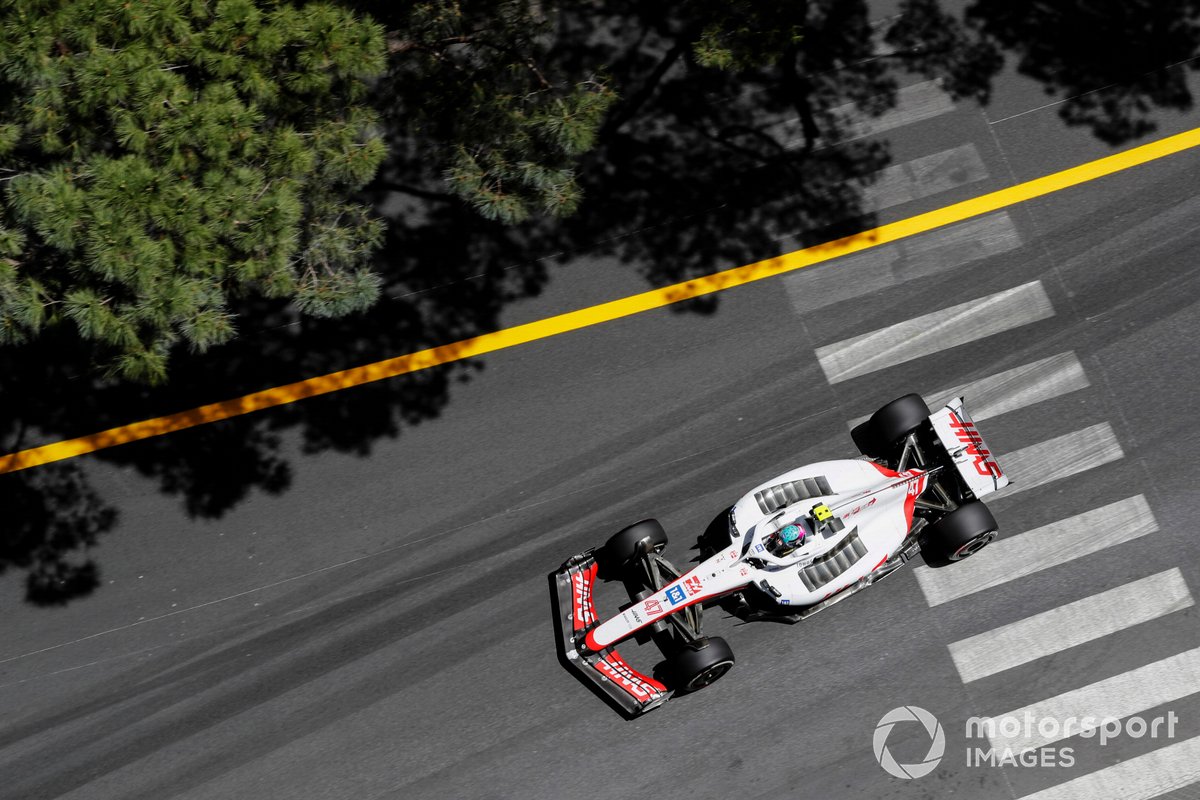 After four minutes, the track reopened, which paved the ways for the two McLarens to cycle to the top. Medium-shod Norris lowered the benchmark to 1m15.301s and then 1m15.056s to keep 0.2s in hand over Ricciardo on the same tyre.

It took until 22 minutes to run for Pierre Gasly to split the pair as Russell then moved to third and further demoted Ricciardo.

And as the final quarter of an hour landed, again the leading Ferrari and Red Bull protagonists came to the fore. Verstappen ran quickest with a 1m14.7132s upon his switch to medium tyres but soon headed for the Sainte Devote escape road after a sizeable front-right lock up.

Sainz might have gone even quicker with the best first and second sectors at the time, only to run across the swimming pool chicane to avoid slow traffic.

With 12 minutes to run, Leclerc bolted around on the medium tyre to land a 1m14.531s to sit in first place, where he would remain.

Perez was able to improve to within four hundredths, as Sainz ended FP1 a tenth adrift of his team-mate. Verstappen finished the opening gambit 0.2s in arrears of Leclerc, while Norris, Gasly and Ricciardo were shuffled to places 5-7.

Russell led the troublesome Mercedes attack in eighth, with Hamilton rounding out the top 10. The Silver Arrows duo sandwiched Sebastian Vettel, with only the pair of Aston Martins and Williams venturing out on the fastest-available C5 soft tyre. 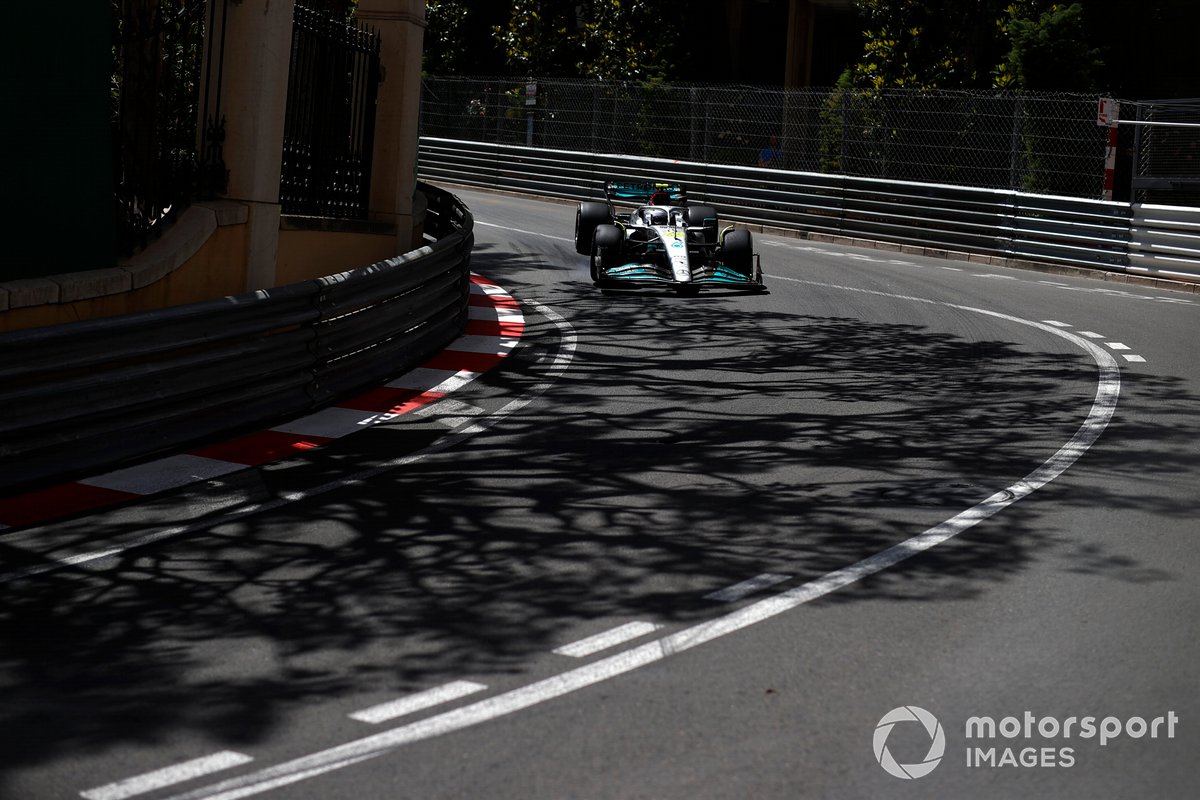 Yuki Tsunoda hit 11th over Lance Stroll (who complained he was going to crash with no front grip), Alonso and Magnussen - the Haas driver another to step beyond the limit at Sainte Devote.

Albon ran to 15th amid complaints that a bouncing Williams was causing his front wheels to skip into the air.

Valtteri Bottas was slowest and only able to complete two laps at a venue where the lighter, short-wheelbase Alfa Romeo is expected to excel. He complained about a pedal box issue and pitted but never returned to the circuit thereafter as his Friday misfortune endures.

Video: When F1 conquered the Indy 500