There were two red flags that held up proceedings – Carlos Sainz crashing in the early stages and Nicholas Latifi stopping late-on without drive on his Williams.

In slightly cooler conditions compared to Friday afternoon’s earlier FP1 session, Latifi had led the pack out of the pits and duly established the first-place benchmark time at 1m36.312s.

This was quickly beaten by Sebastian Vettel, Sainz and Esteban Ocon – with all the early pacesetters completing their early running on the medium tyres – the top spot time worked down to a 1m32.906s.

Fernando Alonso surged ahead a few minutes later on a 1m32.094s, also on the yellow-walled rubber, before Sainz moved back in front on a 1m31.463s.

As the first 10 minutes of the one-hour session ended, Leclerc’s first flying lap of FP2 ended with him going to the top of the times with a 1m31.131s, before Sainz – his opening run on the same set of tyres continuing – then getting back to first thanks to his 1m30.964s.

But a few minutes after this, Sainz’s session was ended when he suddenly lost the rear of his car going through the Turn 13 fast left just before the tight chicane late in the second sector and hit the wall on the outside of that complex. 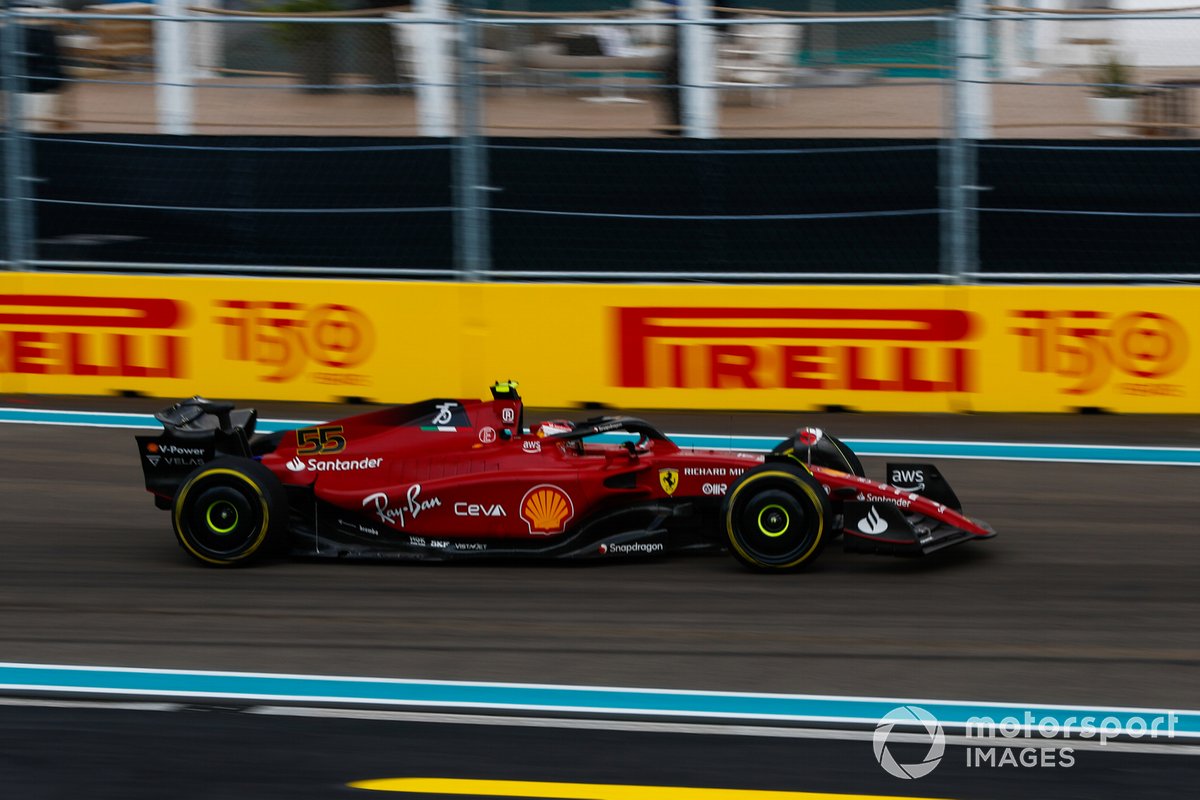 The Spaniard had appeared to slide slightly off line going through the preceding long Turn 12 right and when he swept through the next left his F1-75 snapped backwards to the right and he spun off backwards, the car’s front right knocked off against the barriers.

That led to a 12-minute delay as the wreckage was cleared, after which the pack re-emerged on the softs for a series of qualifying simulation efforts.

Alonso looked set to use his softs to forge ahead of Sainz’s medium-tyre benchmark, but he came across Verstappen going slowly at the chicane and had to back out.

The Red Bull driver had only just left the pits for the first time after Red Bull had replaced his gearbox after encountering overheating issues in FP1.

That meant Verstappen had missed the first half of FP2, but when he did leave the pits after the red flag stoppage, he quickly reported a severe steering issue, which left him touring slowly around – also getting in Lance Stroll’s way dramatically as the Aston Martin came across the Red Bull, unable to turn fast even with full steering lock on, at the Turn 11 90-degree left at the end of the long acceleration run through Turns 9-10.

As Verstappen came back to the pits with what was later described as a hydraulic issue, his right-rear brakes caught fire and he did not return to the action.

Lewis Hamilton then moved into first place with the first soft-tyre lap to beat Sainz’s earlier leading effort on the mediums.

The seven-time world champion went quickest on a 1m30.179s, before a few seconds later Leclerc returned to first with his soft tyre flier, which was a 1m30.044s. 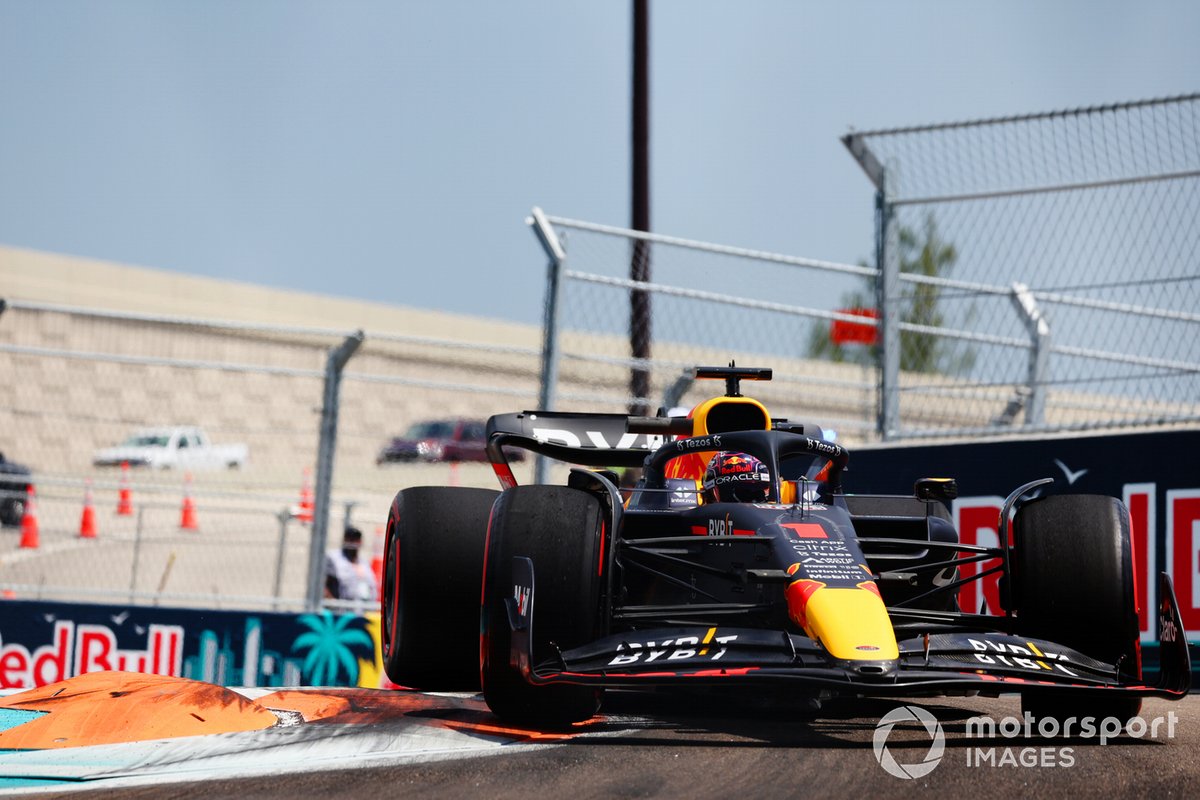 But Russell – second in FP1 with an updated Mercedes package that does not appear to be porpoising as badly as it had at the opening rounds – then moved into first with a 1m29.938s.

That stood as the best time to the end, even after Leclerc attempted two more fliers on the softs – the first of which was with the same set of the red-walled rubber as his opening effort, which he abandoned after losing time to Russell in the middle sector.

His third soft effort followed a trip through the pits, but even with a personal best in the third sector he could not improve and ended up staying second, 0.106s slower than Russell.

Sergio Perez used his soft tyre run to slot in ahead of Hamilton – 0.212s adrift of Russell’s leading time – with the Mexican driver then spinning his Red Bull in the Turn 11 runoff just after passing Sebastian Vettel’s Aston in the long-run data gathering laps that concluded FP2.

That phase was initially interrupted by Latifi pulling over on the meandering, rapid run that follows Turn 8 and the fake marina at the Miami track.

The Canadian was concerned his left-rear tyre was not attached properly before reporting a lack of drive, after which he pulled over and stopped near a gap in the walls, which led to a second red flag stoppage of four minutes.

The end of the session featured two more spins – Vettel looping around at the same point as Perez, albeit not in the Turn 11 runoff, having let Alfa Romeo’s Zhou Guanyu go through on the inside and the four-time world champion losing grip on the outside line.

Kevin Magnussen also spun off at Turn 7 in similar circumstances to Valtteri Bottas’s FP1 crash there – the Dane, though, coming tighter from the kerbs on the inside and therefore going off and much slower speed, which meant he stayed out of the barriers.

Behind the leaders, the top 10 was completed by Alonso, Lando Norris, Pierre Gasly, Zhou, Ocon and Magnussen.

Bottas also did not set a time as his car could not be repaired in time following his FP1-ending shunt.